Ten Years Of Post-Punk Monk On This Day 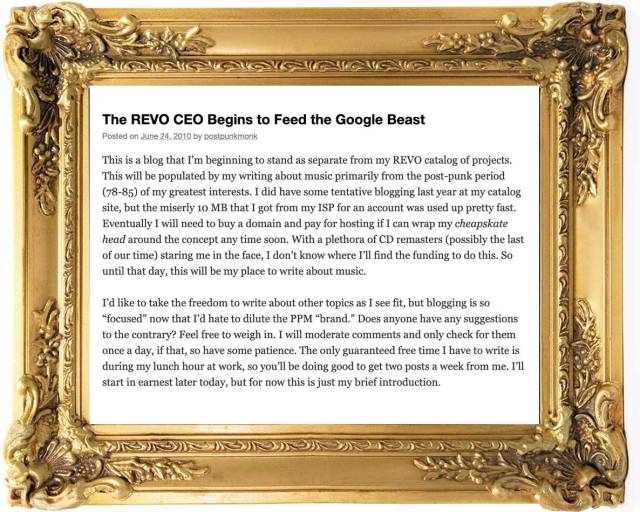 Yow! It was exactly a decade ago today when I crossed that line in the sand and decided to begin blogging about music. I was not an early convert to the notion. This was basically down to the idea that I had scant free time and would rather spend it at the highest level of satisfaction that I usually received: making CDs of things not actually issued by record labels. But after 20 years I’ve made maybe 90 or so projects. A lot less than I imagined that I would have made before that whole wheel began turning, but things happen and plans change. Demands of family and career come before my hobbies. 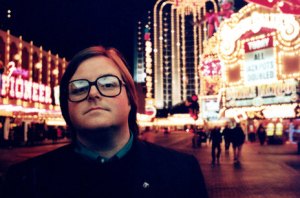 Ron Kane on The Strip

While I was resistant to blogging, I had a friend who had been doing it for several years; the semi-legendary Ron Kane. I’d known of Ron since meeting Mr. Ware in 1985, but it took until 2008 [Ron’s 50th birthday] until we actually met the guy face-to-face. Ron lived on the opposite end of the country and there was little cash for big trips on a regular basis. But Ron had been blogging since…2000 or so [memory’s fuzzy there]? And I’d read his blog every day and when the subjects was something I could comment on, I’d read and comment during my lunch hour at work.

Sometimes, my comments were way longer than his initial posts I was responding to. And by 2018, a 20 watt light bulb went off over my head: I had an hour to myself, five days a week, where I actually couldn’t be doing housework, or tending to any hobbies I might have. Eating lunch took only a quarter of that time. The rest was my time to do whatever I wanted to do while sitting at my desk. Why not blog?

At the time, Ron was on Blogger, and the Google Empire was still seen as somewhat benevolent, so I signed up with Blogger and posted my first post. After the short intro post as seen at the head of this one, my first real post was on the cancer issues dogging the great Mick Karn of JAPAN. And we took off from there. At first the blogs were brief: 200-500 words was the norm, but after a while the long-winded rants that had been building up inside of me began to break free. There were some album reviews that I look back on now and they might be 300 words on something that deserved 1500-2000 over three days! Of course, within a month or two, Google had stopped paying lip service to their “don’t be evil” branding, and was siding with Verizon on an internet privacy issue, so I made the decision to stop using Google products and services. Almost as fast as I began blogging, I switched platforms to WordPress and was much happier.

Another idea I had for the site when in the planning stages was the idea of a Rock G.P.A. that compared every album by a band in my Record Cell who I had their full output of. I felt that it was an interesting enough concept to maybe even stand on its own with lots of writers contributing to rank and weigh the complete canon of rock. I envisioned venture capitalists buying me out and the thing taking on a life of its own. Needless to say, that did not happen. The first ones for Icehouse and Duran Duran were so brief the former ran on a single day! The latter reduced my thoughts on a full album into a single paragraph over two to three days! In later years I posted on the last two Duran Duran albums that came out afterward and the writing for those two albums were spread over many times the word/page count for the eight or nine prior albums! I often think of re-doing Icehouse and the Duran Duran from 1981-2001 Rock G.P.A. to the standard I grew into [verbose].

Speaking of verbose, there was the infamous Simple Minds Rock G.P.A. thread, that ran the better part of a year, and amounted to over 120,000 words! In other words, a book. And not a particularly small one, either. Admittedly, it’s in crude, rough draft form. But another of the important origins of this blog was the analysis I would compose in my head when on the long commute to my job that was just itching for an outlet. Giving these compulsive thoughts a form and home was another of the ideas that leveraged the creation of this blog.

The fact that this is all very hastily written has given me some heavy chagrin. Usually daily. There are countless typos, mangled syntax, run-on sentences [which I admittedly like for effect even though… bad writing], and numerous instances of the flouting of Strunk + White. If everything here is a first draft [and it is…], I often fantasize about returning to each post and editing it for clarity and impact. Maybe in my dotage, because with 2000+ posts, it would keep me very busy. Miraculously, about one post in 40 manages to hit my personal quality standard the first time out of the starting gate. These moments, fleeting as they are, give me hope to press on regardless.

When this blog started it was a very obscure corner of the blogoverse. I have nothing to do with FaceBook, Twitter, or other social media platforms. And it’s never going to happen. I have never liked the idea of those things, and thought them ill-suited to my mien. Of course, the last ten years have painted a horror picture of how these platforms monetize the basic human impulse to connect and exploit their users and decimate any notions of privacy.  To the point that the remaining staunch users of them are all old people like myself. The youngsters have moved on. Even so, this blog’s readership has grown considerably over the years. When it started, about 250 hits a month was the norm. Now, its about 50 times that level. This year has seen the tremendous page growth over the previous year, but about 10% of that growth is now spambots. Fortunately, the WordPress Aksismet anti-spam system is very effective.

Several years ago, I was noticing that WordPress was suggesting that it might put ads in the blog if its readership grew to the point where the organization could monetize my free blog with ads. When I’m logged in as admin, I wouldn’t see these ads, and I was always logged in, so the blog might have had ads in it for a year or so before it came to my attention, but when it did, I took the step of moving to a paid platform so that I would insure an ad-free experience for any readers. I pay out of pocket yearly for the privilege, but it’s money well spent. I don’t want to be associated with a cash-grab in any way. So I own postpunkmonk.com going forward. I use managed hosting through WordPress. It’s not the cheapest way, and I’ve plenty of experience building WordPress back/front ends for websites, but managed hosting is far more secure than D.I.Y, which requires constant policing to maintain integrity from outside forces. To me it’s so worth the cost to never worry about hacking or malware and just write the darned thing.

Writing is the main reason to do this, of course, but the dialogue between myself and the readership is something that was an unforeseen benefit to the whole enterprise. Where can I begin to recount the amazing new bonds forged in the comment zone? Of course there were old friends that predated the internet like chasinvictoria, Mr. Ware, Ron Kane, and JT, but others like Echorich, Tim, Taffy, Gavin, Jordan, mathmandan, Andy B, bpdp3, and negative1ne are just a few that I can think of off the top of my head who’ve really infused the comments with their sparkling essence. negative1ne actually puts the time I can spend on research [always a problem with my limited time] to shame with his factually packed comments full of discographical research. I’ve actually met, broke bread, and shopped for records with Echorich. On more than one occasion, but not enough by my reckoning! I was all set to visit with Gavin in his sanctum sanctorum before the covid-19 crisis put a premature end to that one week out, when it really looked like a bad decision to travel to the UK in a hot second. There were more than a few UK commenters and contacts that I was looking forward to at least a quick meet-up with that who knows when and if it will ever come to pass. 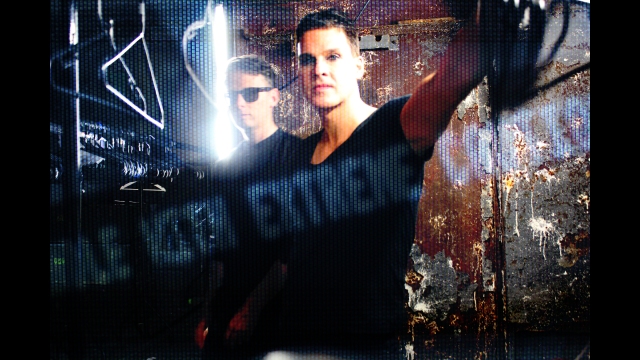 I have a fantasy that my wife sometime encourages, that one day we will have MonkFest® at some place in The States, where any and all comers can congregate for a weekend of Post-Punk minutiae, good fellowship, and some great live music. I think I might be able to afford to import Steven Jones + Logan Sky for a great set of electronic goodness and synth noir atmospheres to cap off the festivities. And there would of course, be record shopping in whatever city it happened in. Maybe we could crowdsource this bad boy one day? I’d drop a few hundred on it, easily. If John Foxx ever plays a gig in America, then that city will be the place and time. Guaranteed.

One of the surreal things that the blog had fostered has been the occasional contact from the artists who populate my Record Cell! A post on Mari Wilson and my fussy boxed set of her “Showpeople” album led to her webmaster reaching out and the next thing you knew, I was doing the discography for her new website. Then the wonderful singer Jacqui Brookes used the contact form here [don’t be shy] to ask for an MP3 of one of her B-sides. Of course, I had to send her the REVO 2xCD DLX RM I’d made of “Sob Stories;” her amazing one album partnership with Jimme O’Neill of Fingerprintz. So she was the first musician to get a CD of their work I’d made, but not the last. Recently I got comments and linkbacks from Malcolm Garrett, one of the premier graphic designers of my generation. He joined Martyn Atkins in that good company of designers who populate the sleeves of my Record Cell and managed to stumble upon PPM and leave a comment. If someone had told me ten years ago that I would be talking music and politics with the gent who signed Simple Minds to Virgin Records in 1981 I’d have said “y’r daft, laddie!”

It’s been a fast and fun decade here and though I’m closing in on my dotage, I imagine that there’s at least another decade of this stuff left in me. Hopefully, there will be a few new twists and wrinkles that none of us could have imagined at the onset shaking up the paradigm and providing us with wonder and astonishment. If you’ve read this far into by blather, thanks for joining us. Be here tomorrow. Same Monk Time. Same Monk Channel.