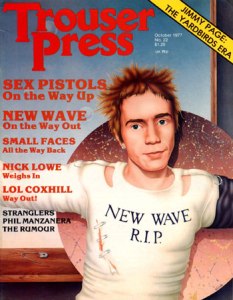 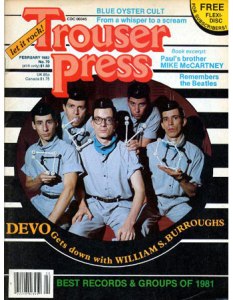 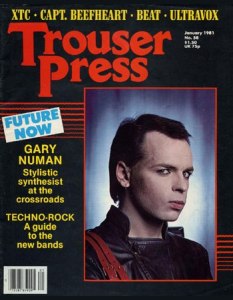 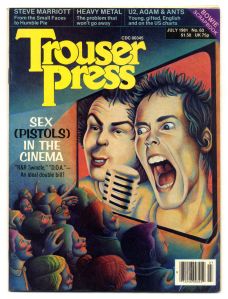 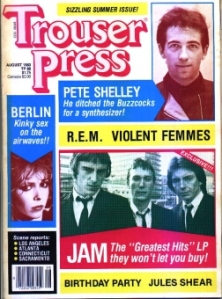 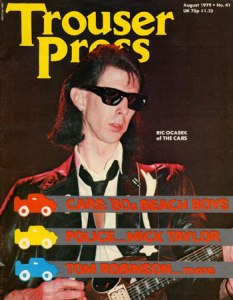 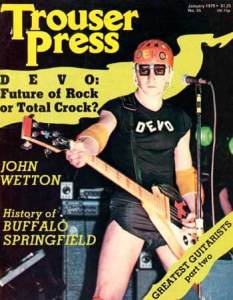 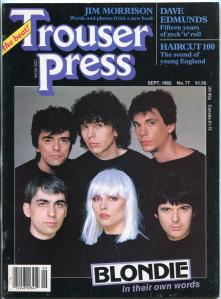 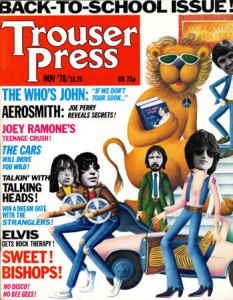 The message arrived Monday, June 1st at the unlikely hour of 7:13 a.m.

“As former posters on the Trouser Press message board, I wanted to alert you to the site’s relaunch today and invite you to resume your posting on musical subjects far and wide. Your old credentials have been imported. Rock on!” 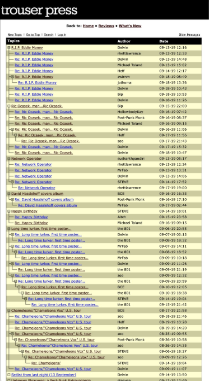 Wha…?!?! The online presence of the crucial Trouser Press Magazine had been a modest oasis for the sort of music fan like myself who still gets excited to discuss music with other like minds. The site since the early naughts had been hosted on an aging code base of 800×600 HTML with the content from each of the famed Trouser Press Record Guides; five volumes that covered [mostly] Post-Punk and New Wave music and its descendants [and significant antecedents] through to near contemporaneous timelines. Not much had been added in recent years to the indexed review section, but on occasion, new reviews might get uploaded to the site just when one wasn’t looking. The main pull for myself, was the Trouser Press Message Board; and old-school online forum where music fans would discuss music of past, present, and future with all of the acumen that their long years of analysis and consumption of rock and pop music had bestowed upon them.

The forum allowed for discussions that I really appreciated. I’ve been a member of several music forums and the TP forum was my overall favorite to participate in. Particularly among those forums that were not devoted to a single artist. Some of the regulars there like bpdp3 and zoo have even drifted over here to chime in on a regular basis [thanks, guys!] As FaceBeast has devoured the notion of any public interaction about the passions of the participants that aren‘t being weaponized and monetized by analytical software, I’d really appreciated the inclusive but non-exploitative vibe that the TP forum came to offer.

I would check the forum several times a day when topics of interest were bubbling up, but it was some time in the fall of 2019 that the site stopped working. As an occasional web developer, I’m familiar with what happens when the PHP code of a site is updated, as it happens from time to time. While the new code will have modern features and increased security, all too often the actual web code being hosted falls out of sync with the underlying frameworks which are the foundation of the site.  At that point, the site needs to be rebuilt using modern code. 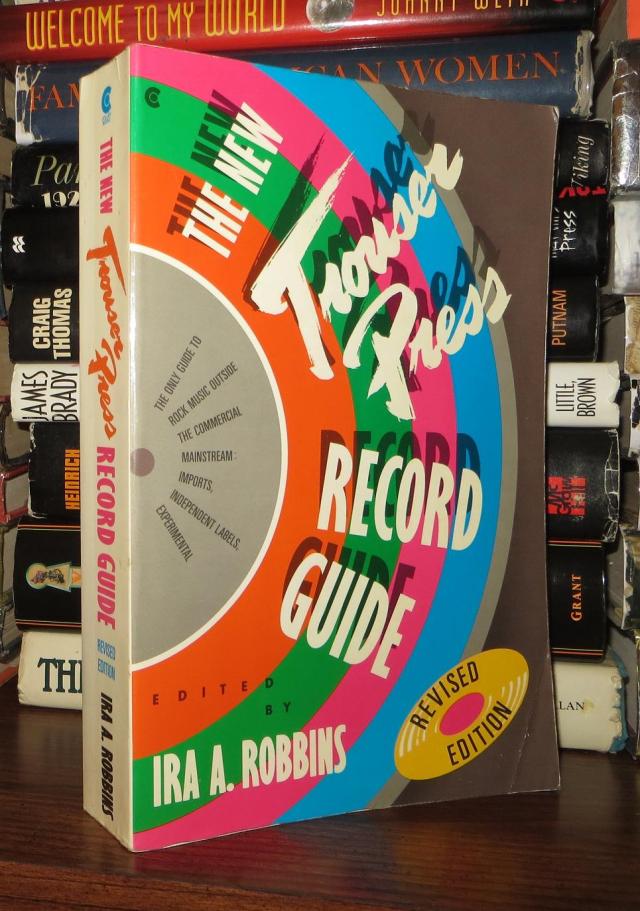 Presumably, that’s what happened in the last several months as publisher/co-founder Ira Robbins thoughtfully contacted the registered users on Monday to let them know that Trouser Press was back and in robust health. As we near the middle of what has been an unmitigated disaster of a year, I’m thankful for the effort made. The new site features some of Robbin’s pithy articles of depth written for various and sundry concerns if not his own need to communicate. A section of TP photos is also a nice start. The magazine had some of the best New York City photogs publish in the magazine and I’d love to see more of artists like Ebet Roberts or Bob Gruen who added so much visual flair to the magazine represented there as well. All of the text of each of the five volumes of the Record Guide are here now, along with the new entries that had trickled down over the years. 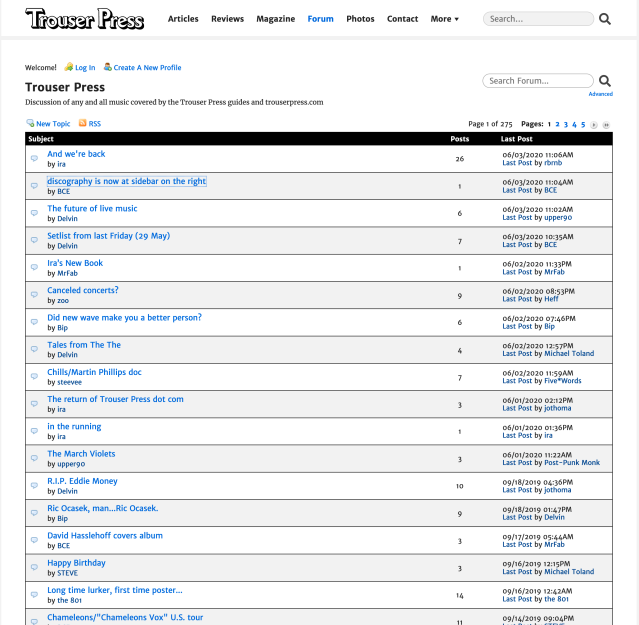 The new forum being web 3.0 [are we there yet?] uses more space for less information – like anything else

The new forum miraculously contained all of the posts from the last one and presents a seamless extension from the point where the old one died and the new one took its place. Of course, the density of the information is looser since everything on the web now is big, but that’s just an observation; not a judgement. I’m happy it’s back and have wasted no time in getting back up to speed. 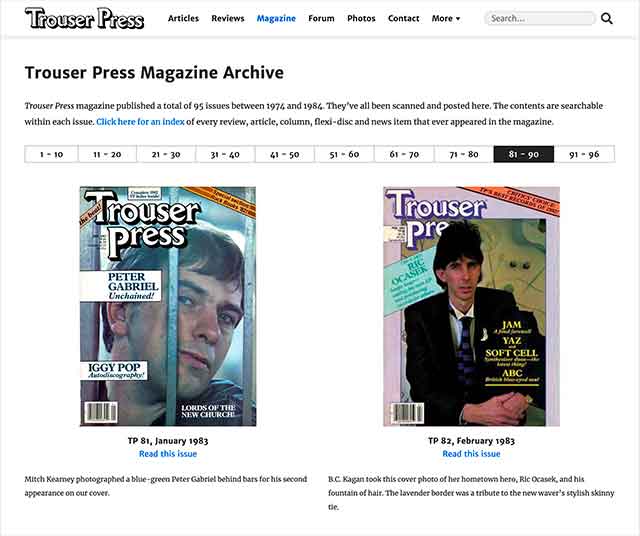 Here’s what you are going to love about the new TrouserPress.com

But by far the most exciting aspect of the new TrouserPress.com  was the searchable, online archive of every issue in full! My collection only went from number 60 to the end. There are now complete PDFs of the entire run, available for download or online reading. I will admit that I wasted no time in diving straight into reviews of records that I had considered crucial, but had missed in the mag due to my Monk-Come-Lately status. Now I could finally see dripping wet reviews of albums that tower in my pantheon like “Systems of Romance,” Vienna,” or “Empires + Dance” …only to find that yeah, they really didn’t like “Empires + Dance!!!’ Well, at least they still liked Ultravox [then].

Back in the day Trouser Press was the only game in town to cover a lot of this music so I found out that critical consensus between me and the magazine was a venn diagram with about 40% overlap. Yeah, they loved Ultravox [for as long as anyone should have] but other bands that were major to me were disdained or damned with faint praise. Maybe part of that was down to the critical stance that high praise had to be earned and always with the benefit of hindsight. I understand that perspective even as I can’t really embrace it myself.

But why are you reading my blatherings about this? Anyone who doesn’t have a full set of Trouser Press in their own personal domicile should get thee hence to the new website and dive in feet first! Click that logo now!

10 Responses to Trouser Press Is back…Back…BACK!