This was terrible news this morning. Cristina Monet-Zilkha, better known as simply Cristina for her small, but devastating body of work for ZE Records, has died yesterday; another musician taken in the covid-19 pandemic. Her profile post 1984 was slim. She recorded a 12″ and album cut for Ursula 1000 14 years ago that was a tantalizing glimpse into her dryly biting world of deadpan kitsch and character studies as incisive as a freshly minted scalpel. But even if she had not broken the long silence following her magnum opus, “Sleep It Off,” that album would hold a dear place in every black heart of the demimonde in which she traveled.

Could she sing? Not really, but when you can write like she did, singing is of scant consequence. This artist had a pitiless and penetrating vision of human nature that was second to none. Born into a studied family [her parents were a psychoanalyst/playwright-novelist pairing] and married very well to Michael Zilkha; the heir to the UK’s Mothercare corporation, her husband was not content to be a simply wealthy gadabout. He scratched a creative itch by being one of the prime movers behind New York City’s astounding ZE Records; one of the most brilliantly curated labels I’ve ever run into. He put that trust fund into good use as a foundation for a stunning vision of art and music. Everything I’ve heard from the label was dazzling and idiosyncratic. It had style and vision that went for miles. When  Zilkha gave his wife Cristina the platform of her two albums, it could have all gone so wrong… but that viewpoint could not take into account her vivacious and probing intellect.

With her first album written and produced by August Darnell; Kid Creole to most of us, her puncturing of disco’s straitjacketed norms was feeding into the rise of ZE Records and their mutant disco aesthetic. The album played like the interesting side project that any fan of Kid Creole + the Coconuts might enjoy. Even so, this did not prepare us for the quantum leap that her later work revealed.

A big hint was given in 1981 when the “ZE Christmas Album” dropped with the next song that Cristina would release. This time a co-write with The Was Brothers. This was where I joined the story already in progress. WPRK-FM college radio played the hell out of her brilliant, nihilistic xmas anthem “Things Fall Apart.” I was immediately smitten with the emotionally devastating deadpan of the song. Sure, sure. It grooved, but I can’t imagine dancing to its bleak and damaged vibe. Not without strong drugs that I don’t take. 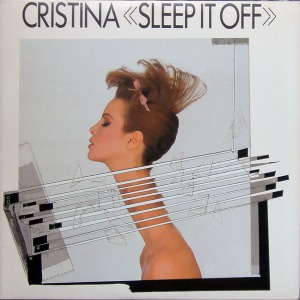 Her second album, an interminable three years later, represented a huge leap forward as she was continuing to write the lyrics to the original songs here; with music co-written with ZE royalty like Doug Fieger, Don Was, and the brain trust [Ben Brierly, Joe Mavety, Barry Reynolds] behind Marianne Faithfull’s equally powerful “Broken English.” That made perfect sense as “Sleep It Off” was the acid valentine we had been longing for in the wake of “Broken English.” The cover tunes [Van Morrison, Brecht + Weil, Sonny Throckmorton] were expertly chosen to be of a piece with the originals. A better album Don Was would not produce in the the ensuing years.

Let’s all take tonight to play any Cristina music at hand and marvel at her worldview and aesthetic. The potency of her art was a rare thing in this fallen world of pop music. When I spoke to Echorich this morning he suggested re-running my Cristina posts today if I didn’t do anything else, and I can’t think of a better thing to do, other than playing those records!

Each image below is a button to an earlier post about Cristina. 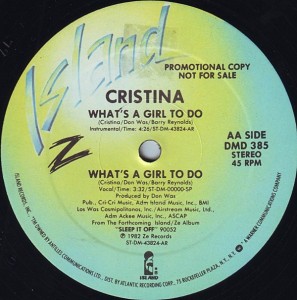 SONG OF THE DAY: What’s A Girl To Do 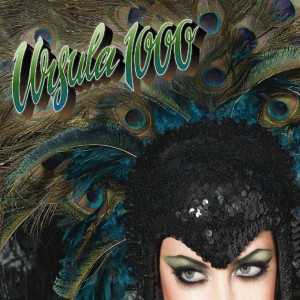