Gloryoski! A Record Store Day release that I actually want to buy in 2020 will happen this year. But it will happen later than the planned April 18th RSD planned due to the covid-19 impact. Record Store Day has now been moved to June 20, 2020 instead, and truth be told, I think that may be a little optimistic, given that the disease has the potential to double its victims every two days until it goes exponential. But publis health issues are not necessarily the exclusive purview of this blog in spite of yesterday’s rantings. [I’m sorry about that, by the way]

I first ran across this mentioned when negative1ne posted about this on the New Wave Outpost Forum a while back when we were hip-deep in other threads. Well, now is the time to think about this. I have been mostly “hands off” on the whole RSD thing in the last 5-6 years. I did buy the Prince “Versace” cassette a few after the feeding frenzy later last year when I found myself in a store – and regretted it when they released a CD of that title just a few months later! But this is an interesting thing for an Ultravox fan like me, because they are new 2020 Steven Wilson mixes out for the first time.

I only have a single “Steven Wilson mix;” his 40th anniversary edition of “In The Court Of The Crimson King” which came with the album in 2.0 on disc one with his 5.1 mix on DVD as well. It’s fine. His 2.0 mix is very close to the original mix with the exception of the decision to edit 4-5 min of annoying improv from “Moonchild,” which gains a lot from Fripp’s decision to act on the impulse he passed on in 1969. But Steven Wilson has done a lot of remixing for artists that I enjoy, like XTC. Just not enough to re-buy their albums again for. 5.1 listening is very far down on my list of priorities since I never sit on the living room couch to hear music. 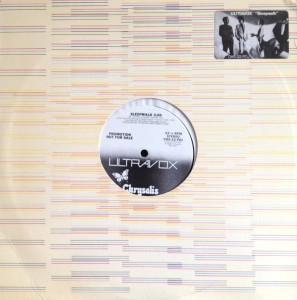 This is technically the first time that the single has been on 12″ and label Kobalt have upped the ante by releasing this in clear vinyl, just like the vintage ‘Vox singles of yore. I say that because there was a US promo only 12″ of the track [same on both sides] that I think I have a copy of in the Record Cell… just because. But I can vouch that if I do have a copy, mine most certainly did not have the cool photo hype sticker that this image [LEFT] showed. As you can see, the generic Chrysalis 12″ sleeve [used from ’81-’82 for any 12″ without a custom sleeve] of the time was nothing to write home about. The new one will most definitely need to find its way into my Record Cell!

The more interesting data reveal that the A-side will be part of the “Vienna” “40th Anniversary Box” due out “this summer.”

Yeah, I hope that got your attention as well. I’m actually shocked at the notion of a “Vienna” SDLX box. I thought that well had been bled dry with the 2009 “definitive Edition” 2xCD sets. How many “Vienna” reissues have we had in the 21st century?

There’s the 2xCD with B-sides/remixes/rough mixes. The recent LP reissues. The BBC live disc from the 90s. This single only reveals that Wilson has made a new 2.0 mix of the masters and the full album will be part of this box. A 5.1 of “Vienna” would be slightly interesting, but how could he top Conny Plank? [answer: he can’t]. But what else could be in the box?

Price: I’m guessing more than it’s worth to me.

In a worst case scenario, it will all be on LP only with a Blu-Ray of the digital audio. It’s potentially irritating to have the rare album I enjoy get the SDLX treatment but I really can’t imagine anything compelling happening here. Do I really want to pay a lot for what has the potential to be a step down from the classic album we already know and love? I think I’ll buy the 12″ and see where I go from there.

The single always had a great B-side, “Waiting.” According to the hype, the Wilson 2.0 mix of that will only be on the clear 12″ single. So there’s that. The price will be $16.99, according to Rough Trade, who will be selling the remaining stock of this title online at noon on June 21st, 2020. Making for a cyber RSD frenzy that might be as obnoxious as the real thing. We’ll see. But I will be saving my shekels for that in any case. I hope I can get one for the base price. What do you think?