Would you buy a used tune from this Man [Parrish]?

No sooner than we took a deep dive into the multifaceted world of Giorgio Moroder then the word came over the transom that Steven Jones + Logan Sky vocalist Mr. Jones revealed that he had found a few spare hours in between recording albums with his full-time partner to team up with NY Electro pioneer Man Parrish on a new album of classic electropop cover versions. A glance at the proposed roster reveals at least a pair of Moroder hits in “Neverending Story” as well as the true 80s ground zero that was “Flashdance.” Other tracks caught in Parrish’s net included Soft Cell’s “Tainted Love,” The Buggles’  “Video Killed The Radio Star,” Eurythmics’ “Sweet Dreams [are made of this],” Depeche Mode’s “Just Can’t Get Enough,”and presumably the Bananarama/PWL arrangement of “Venus.” The odds that it was the Shocking Blue arrangement… nil, probably.

I have managed to hear a taster in the duo’s cover of Telex’s still relevant “Moskow Diskow” which is the perfect track to be talking about after yesterday’s evocation of “Trans Europe Express” and “I Feel Love,” because this Telex track from 1979 was nothing if not the Belgian bastard love child of those two songs! Back in 1980/1  [memory’s blurred…] chasinvictoria passed along his US copy of “Neurovision” by Telex to me and I was quite taken with the Belgian trio’s deep plunge into the sort of electrodiscopop that Kraftwerk and Moroder were trailblazing. Unsurprisingly, Sire Records at the time crafted a Frankenrecord® [a US specialty] out of bits and pieces of 1979’s “Looking For St. Tropez” and 1980’s actual “Neurovision.” In a look at just how small the world really is, Telex enlisted Moroder veterans Sparks to write the lyrics for their third album, “Sex” for 1981!

So that was how I was familiar with “Moskow Diskow.” I used to have a cassette tape of it from 40 years ago back when Home Taping Was Killing Music®. All I have of this tune for possibly several lifetimes were memories, and yet I can state with clarity that the job that Parrish + Jones have done with this venerable electrodisko firecracker was utterly breathtaking. The high-stepping bass sequencer was shot through with portamento explosions of synths while the high-bpm rhythm track kept the wheels of steel turning. Best of all, Steven Jones managed to embody my beloved “deadpan women” trope of vocalizing for a rare example of the deadpan male voice! He has proven that you don’t actually need the xx chromosome to sign with the chic detachment of a male Grace Jones. Just the will to do it. 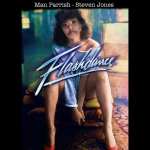 Other than the fact that it’s merely a 3:57 track, [where is the extended remix?] there is nothing wrong and everything right with their Telex cover! The notion was that Parrish will release each of these 25 pop tracks he’s recorded with Jones and two other vocalists [as well as himself] a fortnight apart with the whole project compiled into “The Art of POP” album [possibly on 2xLP] at the end of it all. Alas, “Moskow Diskow” will be the second single, due on March 1st. The first single to reach the usual streaming/DL venues will be the duo’s first Moroder cover of “Flashdance” in two days. Then the third track, their “Tainted Love” cover, will follow two week on the heels of “Moskow Diskow.” See where this is headed? Every other Saturday for a year you will have a new track to investigate. As I’m immune to the platinum charms of “Flashdance” [your mileage may vary…] below you may find a link to the glorious Telex cover.