Posted on February 6, 2020 by postpunkmonk

While I’d first heard Berlin in late 1981 when their self-released single of “The Metro” made it onto WUSF-FM to ensnare me without ever finding a copy [that was affordable], I next ran across the band when Enigma Records had released their “Pleasure Victim” mini-album and advertised it in the pages of Trouser Press ca. 1982 in an ad with the copy “what if Blondie and Moroder had made a whole album.” Eventually Geffen Records sensed something they might be able to sell and the band started to take off in an America finally giving New Wave a chance. Geffen re-released “Pleasure Victim” and I didn’t need to mail order it from a Trouser Press ad.

By the time of their full second album, the Geffen money was sufficient for the band to actually get Moroder himself to produce a pair of tracks earmarked for singles release from the “Love Life” album. “No More Words” was the leadoff single and the “Bonnie + Clyde” styled video saw it roaring across the screens of MTV; taking the tune to the exalted #23 spot on the Billboard Hot 100®. On the other side of the world, history repeated itself as the song reached the exact same spot on the Australian charts. Berlin were the third rock concert I ever saw on the “Love Life” tour and I had enjoyed their new album a lot, but I never got the US 12″ single of “No More Words.” Instead, I opted for the UK 2×12″ of “You Don’t Know” from the “Count Three And Pray” album of 1986 that to this day I have not heard. It featured the US 12″ tracks as the second disc in the gatefold double single. 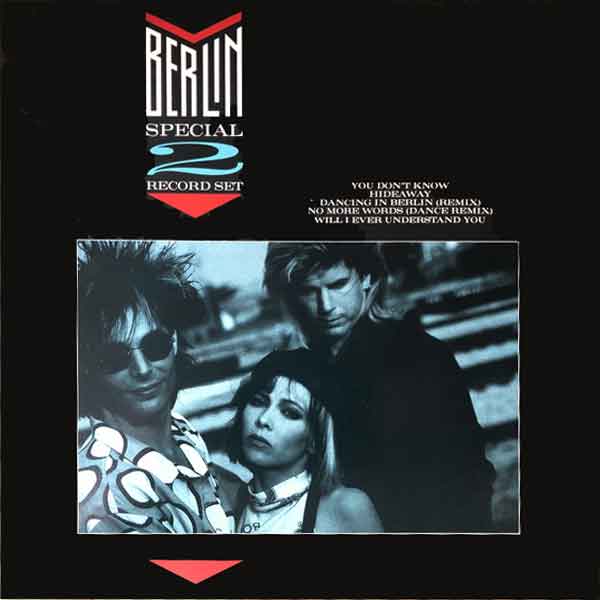 The 12″ mix of this one was 5:44 for a 3:54 song so it was definitely an “of its time” 12″ extended version. The intro began with the percussive, “water dripping” envelope synth that reminded me of similar sounds in “Mr. B’s Ballroom” by DEVO. But it had been extended out to eight bars with the distinctive Moroder bass sequencer fading in before the track got down to business with a drum fill and guitar riff. That sequencer was the only real callback to the characteristic Moroder sound that had built his reputation since 1977. Elsewhere, the band and producer were sticking much closer to pop rock than any disco sounds, even though Berlin had initially made a name for themselves with a gnarly Moroder Eurodisco pastiche called”Sex [I’m A…]” on their previous record.

The synths stayed close to horn patches throughout the song but there were a few stabs of actual sampled horns used for emphasis strategically throughout the song. Singer Terri Nunn was recorded [like much of the track] a little more dryly than was the norm of 1984. She sang with her usual power and it was a pleasure to hear a female vocalist who didn’t believe in vibrato abuse and let it belt for a change.

After the middle eight, the song took an excursion into dub space to extend the track. First Nunn got dubbed out then the percussion synths got some spotlight. Then the bass sequencer triggered the noise gate to give Nunn’s vocal the same stutter effect that was used earlier in yesterday’s single. Then after four bars of that, the sequencer alternated two bars at a time with the stuttered lead synths. Finally, guitarist Ric Olsen got a few bars for a solo while the song returned to the usual end fadeout it always had.

This single was indicative of the changes that the Moroder sound was undertaking by ’83’-84. Disco had been out for several years and Moroder was burnishing his pop chops here. This record found him moving from the superpop of the previous year’s “Flashdance” megasmash into rockier territory with aplomb. This was a very likable single that I felt could have gone top ten, but it was not quite to be. But it did respectable business for a young band. Berlin would be third time lucky with Moroder at the helm of their mega-selling single for the “Top Gun” OST a few years down the line. For what it’s worth, that was Moroder’s favorite of his records, but I prefer the slightly punky spirit of “No More Words” to  the widescreen ballad style of “You Take My Breath Away.”

Interestingly enough, the band had apparently demoed “No More Words” in a form far deeper into the typical “Moroder sound” with a mix that sounded close to “I Feel Love.” This has been revealed by the Scott Davies of Rubellan Remasters, who is  currently working on the DLX RM of “Love Life” with access to the master tapes. Fascinating, Captain.