Posted on February 5, 2020 by postpunkmonk

Following the acid-drenched splendor of “Nunsexmonkrock,” Nina Hagen might have been shocked to still have a contract with CBS records in America.  So in that framework, maybe her linkup with Moroder on the following album wasn’t all that left field. By 1983 Moroder had been a proven hit maker for almost a decade with a fat stack of gold discs [and even Oscars®] to show for it. The song here was written for the 1942 German film “Die Große Liebe,” originally as “Ich Weiss, Es Wird Einmal Ein Wunder Geschehen” [I Know A Miracle Will Happen One Day] as performed by star Zarah Leander. This new [mostly] Anglicized version would now take the actress’ name for its own. 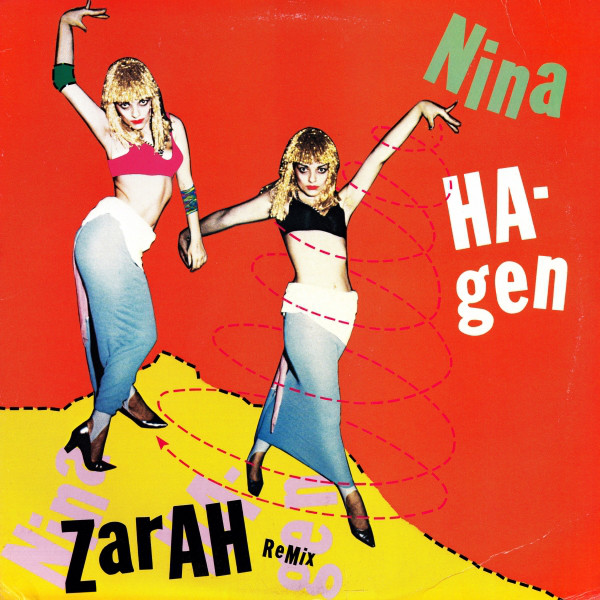 Right from the intro, we were alerted that it was not the late 70s any more as the new standard of digital sampling had been applied to Hagen’s vocals to stretch them comically; like some crazy proto-autotune effect. Samples of broken glass heralded the very current beatbox, that sounded influenced by the drumbeat of “Blue Monday.” Since the latter was released in March, this may have been the case. I can’t determine when this 1983 album was recorded and released. Elsewhere, Simmons drums thundered along with the beatbox.

Before long, the classic Moroder pulsating bass sequencer manifested as the sole link to his artistic DNA of earlier years, but in all other senses, this was a record of its time. Of course, La Hagen took the pop song into operatic disco territory with her endlessly mutable voice. After establishing itself, the song’s second movement veered left with frantic spoken work sections featuring Hagen speed-rapping in English and then German; eventually overlapping both threads as she devolved into binaural manic laughter.

The 12″ single featured a  third movement with the Simmons drums and slashing guitar chords dubbed-out along with Hagen’s b-vox run through a pulsed noise gate to render her voice into chopped vocalese percussion. Then the song circled back to its origins as Hagen ascended into operatic overkill. The odd thing was that the production on her voice as she began reaching for the skies used distancing effects to minimize the power that was obviously being unleashed as the backing track rose to prominence in the mix to take the remix to its conclusion. How I wish she had been allowed to burn the song into the red with her voice here.

This 12″ remix was unique to America and Australia, with a 6:32 remix by Lotti Golden and Richard Scher. The European 12″ had a 5:02 timing common to the version on her “Angstlos” album. The teamup with Moroder here was an instance of his collaborator refusing to let the producer have full reign from the sound of it. The end result has much of the willful eccentricity of the previous album, with a modicum of commercial grease to function as viable rock disco for the uncommitted if they want to connect with it on a superficial level. Moroder’s sound was fully digital here with potentially brash digital sampling used with a lighter touch than many. By the next year Moroder would cross a line of taste in the sand with his album with Phil Oakey, but the production of “Fearless/Angstlos” showed the vet adapting to digital gear without succumbing to overkill. And Nina Hagen would continue on her brazen path to wherever she wanted to go.