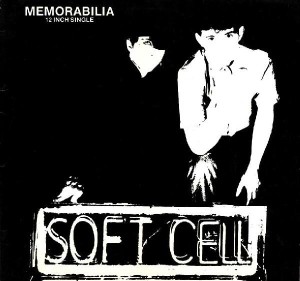 Back in 1982, I can recall first encountering the Soft Cell track “Memorabilia” on the “Non-Stop Ecstatic Dancing” remix album that followed in the wake of “Tainted Love’s” intergalactic success. The “remix album” had been born a year earlier with The B-52’s getting six tracks from their first two albums remixed as a stopgap release the summer of 1981. The next year, in the UK,  Soft Cell and The Human League picked up on that notion, each daring to sell different versions of music already released even as the notion of the extended 12″ was just getting established.

For this more convenient 3xCD set that had all of the 10xCD single box and more for 1/10th of the cost.

What I didn’t know at the time was that “Memorabilia” had been the band’s first single for Some Bizzare and had been released in March of 1981 in advance of the second single in July that had Changed Everything. Blurring the lines was that on 7″ “Memorabilia” was present in a 4:51 mix as the B-side to “A Man Could Get Lost.” On the 12″ we’re discussing, the B-side was swapped to the A-side of the disc [sort of like Spandau Ballet’s “Musclebound/Glow”] at a 7:45 length with a new track, “Persuasion” being the B-side here. I would not hear these tracks until buying the German boxed set of Soft Cell singles on CD-5 some time in 1990. In recent years, the 3xCD omnibus of that box [and more] allowed me to sell of the earlier German box for about what I paid for it in 1990, so no harm done. Apart from the cripplingly expensive “Mutant Moments” EP, this 12″ was effectively Soft Cell’s debut single.

The drum machine was one of the old analog units making a beat that any Depeche Mode fan might recognize from that 1980 zeitgeist. The two-norte synth bass hook throbbed incessantly and the single chord never changed for the entirety of the relentless number. At first I thought that Soft Cell sideman Dave Tofani had played a tenor sax hook throughout the song, but he had no credit here, so what I was imagined was a reed was actually David Ball on synth. This was a single minded track that sprawled as the song was wont to do until at 2:57 a hard splice that was incredibly jarring cut the melodic development of the song right off as it now leapt forward into dubspace with some delightfully ham-fisted effects indicating that we were no longer in Kansas.

That it was all done with the least possible in taste was terribly appropriate to Soft Cell. So there were a lot of sounds blooming into soft focus sonic puddles here. Marc Almond re-entered with more vocals in the last two minutes of the long track; vamping on Torremolinos, Andalucia and its’ tourist culture chock full of the sort of cheap, tawdry souvenirs that the song dealt with. I can’t call it climactic since the song was constructed as a relentless straight line from start to finish with no middle eight, no drop, no climax. It was dance music with few of the features that we’ve come to know and expect in the form.

As much as the A-side here was a far cry from “Tainted Love,” the B-side actually hit much closer to the avant-garde side of the street than anything else Soft Cell would release from that point onward. “Persuasion” is nothing less than a nervous breakdown that took place in a grocery store as Almond was assaulted by subliminal exhortations to “buy-buy-product” in the nearly a cappella intro that had only bleeps and drones as the accompaniment to his increasingly frantic collapse. The elements of the track piled on like the hard sell of the marketplace itself. Maybe this was the track where Soft Cel’s name was coined by?

This was absolutely an example of “miminal synth” aesthetics at their purest as the band were not far from the feel of The Normal’s “Warm Leatherette.” That was hardly surprising since it was produced by Daniel Miller, albeit with a far more layered production as voice upon voice mirrored Almond’s breakdown in the face of all of the commercialism. Well, the resulting track was the furthest thing from commercial. The detuned synths that accompanied Almonds shrieks and shouts were not too far from the sort of dissonance that Cabaret Voltaire favored in the late 70s. The drum breakdown amid only the drums and drones that accompanied Almond’s broken sobbing brought the already frayed track to a ramshackle, foreboding end.

This was precisely the Soft Cell single that you should play for a palate-cleansing exercise after too much exposure to “Tainted Love/Where Did Our Love Go.” True, it’s got nothing on the mature Soft Cell of highly emotional, knowing Marc Almond performances like those of “Torch,” or “Where The Heart Is,” but it was an effective reminder of the dark electronic roots of the band that were closer to Throbbing Gristle than Culture Club. And that could only be a good thing.