It’s been 42 years, but in the waning days of 2019, I finally got around to hearing Iggy Pop’s “The Idiot.” It’s not like I haven’t known the album by reputation for 40 years! As a big fan of Bowie’s albums made around the same time, this was a grievous omission. The cold hard fact was that one of the first gifts I can remember my wife giving me was an LP [German, I think] of “The Idiot” but when I tried to play it the album skipped. She had gotten it for me at Rock + Roll Heaven and there was some notion of taking it back and getting another copy but this never happened though I remember discussing this with owner Ray Ehmen’s brother.

The LP of “The Idiot” has been in my Record Cell for over 20 years. The truth of the matter is that unless I have a CD of a title, I usually never listen to it. Records are a hassle. So I went an inordinate number of years before running into a CD of “The Idiot” at Earshot in Winston-Salem two weeks ago. It was there. A used CD at a good price [$6.00] so I bought it without hesitation. The following Monday, I played it in the car going to work and it sounded really compelling. That’s about all I have been listening to for the last two weeks on my work commute. As soon as it finished it began playing again and there really wasn’t anything else that I wanted to hear more, so I let it loop. In spite of the title, it seems like I was “the idiot. ” Why else would I have not bought a copy of this at least by 1982 when I was all over “Low” and “Heroes?” Because this album was just as good as either of them! Perhaps more so, because this was the template that gave those albums a foundation to be built upon. 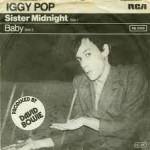 This was apparent immediately up front when “Sister Midnight” got underway. The track [indeed, the whole album] had music written by producer David Bowie who admitted that he was using his writing/production of “The Idiot” as a dry run for what ideas he was interested in pursuing on his next album, “New Music Night And Day,” which eventually was released with the title “Low.” That meant that melodic development was minimized. Monolithic Krautrock repetition [ala Neu] was maximized. Many of these songs could have been constructed from loops if that was more common in the dying days of 1976 when this album was recorded.

What the ear noticed immediately after the repetition was the drum sound. This was the first use of the Eventide Harmonizer H910 to slur the drums with a downward pitch on the decay and this was gated for further effect. Tony Visconti, who only mixed “The Idiot,” has long taken claim for introducing Bowie and Eno to the technique on “Low” but the fact remains that “The Idiot” was recorded prior to “Low” and Visconti presumably came in on the back end of things when mixing happened. But Visconti hasn’t gone on record as to whether he originated the sound on “The Idiot” or not. In any case, the harmonized drum sound served to further abstract drums into sounding more machine like. Almost prefiguring the Simmons Drum sound of four years later. Harmonized drums may have even been an influence on the sound design of the Simmons chips. That would be a good question for Richard James Burgess one day.

The propulsion for the repetitive track was down to the rhythm guitar hook played by Carlos Alomar; the man who got co-writing credit here and on Bowie’s hit “Fame” thanks to his indelible sense of timing and structure as well as his ability to render it intrinsic to the arrangement of the song. As for the singer, Iggy affected his lowest baritone while Bowie doubled him on falsetto for a bracing effect. Split octave vocals where a voice is doubled either above or below an octave from the foreground is an effective technique for generating otherness; but here there were two octaves between the voices for an even more profoundly disquieting effect. And as Iggy progressed through the song, his composure gradually unravelled.

At the song’s midpoint, Pop recounted an oedipal dream that he had as the song [unfortunately] makes a connection with “The End” by The Doors. Iggy Pop had always been massively influenced by Jim Morrison [to the extent that he eventually owned a pair of the singer’s famous leather pants] and this has always been a thing I have needed to endure while being as big of an Iggy Pop fan as I am. I can’t say the same about Morrison. But it was on the next verse that Pop completely dispensed with any remaining cool as he ultimately devolved into making animalistic noises in the song’s coda while the mutant Krautrock-cum-reggae groove lurched into the sunset.