Side two of the original album, as usual, was where the most commercial track on the album rested. “Love Breakdown” was a high-calorie example of whipped cream disco⇓. State of the art keyboards produced to within an inch of their lives with no guitars in sight. The synth saxes were preferable to the real thing and the song had no shortage of shimmery glissandos [ascending and descending] at every turn! The song itself was a perfect, shimmering disco popsicle that for all the world sounded like the missing fifth Dollar single as produced by Trevor Horn. It’s a little lightweight for this album but you can’t knock The Pop.

The odd one out on this album was “Where Do We Go [From Here].” At the time I originally bought this album, this seemed to be a stripped down, almost New Wave technopop. Filled with motorik drumbeats and a pulsating synth bass straight outta “Kids In America.” The two instrumental bars before each chorus had the richest sounding synths on offer here, and I enjoyed the phased instrumental riffage on the middle eight. What I didn’t know at the time was this was closer to the sound of the earl;y single the band had issues without my knowledge at the time. Rather than an outlier, this was the strongest link with their past on the album.

I subsequently found out that White Door had begun life as a [very] late blooming Prog Band with their debut album under the name of Grace coming out on MCA UK in the [I can’t believe this] year of 1981!  That was not just missing the boat, which had sailed by 1978 at the latest, but missing the dock, the port, and maybe the coastline as well! But “School Days” was a song that revealed the prog roots of the band with a song that resembled middle period Genesis as technopop. One can almost smell the hand of Tony Banks here as the effete middle eight reeked of Public School. If this song didn’t make clear the origins of the band, the concluding “Behind The White Door” capped the album off with a suitable opus of gravitas; complete with minor key song structure and a six minute running time. 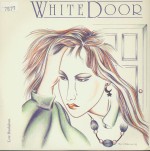 The bonus tracks here went in two directions at once. All of the cuts included were the 7″ versions only, so the masters of the 12″ single mixes [where they existed] might not have been available. “Love Breakdown [Instrumental]”  came from the UK7″ B-side and was a glittering, airy confection. Sue Quin’s backing vocals were the only voice here and her harmonizing fit well with Mac Austin’s incredibly restrained singing. I’d swear he never moved beyond a single octave on the whole album. 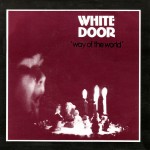 Then things got much more interesting as the prehistory of the band manifested with their two 1982 singles showing their New Wave mettle before Andy Richards got ahold of them in the studio. Neither of these had more than 8 track boards in their origins. The minimal synth footprint of “Way Of The World” [prod. Colin Richardson] was a delicious slice of technopop driven by rhythm box and a lurching beat that one could actually pogo to! It’s hard to believe that this record was released only a year after the Grace album as it sounded far cruder than that or the White Door to come. Sadly, the single’s B-side, “The Extra,” didn’t make the program here. It’s the one White Door single that I still need.

The second White Door 7″ single was here in full. “Kings Of The Orient” [prod. Frank Scarth] began with a furious little rhythm box in overdrive with “oriental” synth riffs and Mac Austin’s most mannered [yet aggressive] vocal here.  A little gimmicky, but fun. Better still was the B-side,”New Jealousies.” It was the most relentlessly motorik beat on the whole disc, and shot through with an aggressive square wave synth sawing its way throughout the whole song. The dinky little synth hook playing against this backdrop stood out magnificently.

And then to give us stylistic whiplash, the final bonus tracks was from the band’s final 1984 single on Clay Records before the band got cut free from Clay. “Flame In My Heart” was an amazing single produced by Andy Richards and engineered by Steven Lipson, so yeah, one might assume that this was the most ZTT-sounding single ever released on a small indie label that was most certainly not ZTT! This single was obviously the proof-of-concept dry run for “Two Tribes!” This was a different song entirely, but the same techs and even bass samples/sequences were crafted here into an arrangement that led nowhere else.

The syncopated bass line in the middle eight will have your jaw dropping at the similarities to “Two Tribes” that followed on this record by probably no more than a matter of weeks. The song’s climax featured the 8-Bit Orchestra Hit® hard-panned from R-to-L for added stimulation. it really must have galled White Door to have heard “Two Tribes” from summer to winter of 1984. They actually had much of the same sauce out to market first to crickets; though the two songs were night and day in the thematic provocation department.

With their final single pointing the way to “Two Tribes” yet failing in the marketplace, White Door broke up. Their sole album and handful of singles were left to be largely forgotten by an uncaring populace. I held onto my copy of the album and bought any 7″ I’d see at record shows in the 90s. Once the internet happened, I managed to snag the “Kings Of The Orient” 12″ during a time that the early singles were being feted by the “minimal synth” market and driving the asking prices up. This 2009 CD stands as a great, if not complete, testimony to the band’s virtues. As well as being the third album of the holy trilogy whose production style, along with that of the preceding year’s 2nd Buggles album, “Adventures In Modern Recording,”and ABC’s “The Lexicon of Love”  absolutely formed the aesthetic DNA of the ZTT Records production style.

The members of White Door eventually re-formed Grace in the late 80s and got in on the re-rise of Prog in the stupid 90s, but a few years back, a new White Door demo bubbled up on Soundcloud and left us wondering when and where the band would manifest again. And we’re still waiting.

⇓ – I can’t believe I just coined this term, but I can’t find it on the web anywhere…