Just How Many Roxy Music Compilations DO I Own, Anyway? 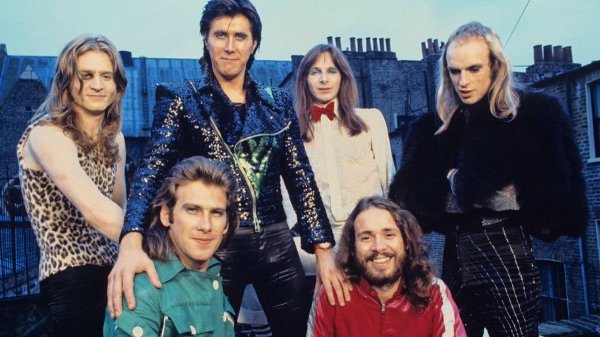 Until 30 minutes ago, I had no idea what I was going to blog about. As I sometimes do, I headed over to my collection in Discogs.com and hit the “random item” button [sort of like the one on the right sidebar of this blog] and was rewarded with an LP I forgot that I had. Roxy Music: “The Atlantic Years | 1973-1980.” One of those records you pay a dollar or two for…just because. Then I got the idea to check and see how many of the Roxy Music compilations did I have in total. There were enough to blog about, that’s for certain! Here’s the story.

This album was actually in my wife’s collection, but I probably would have bought it on my own at some point in the last 25 years! The selection of tracks is nothing to argue with. It was nice to see deep cuts like “Mother Of Pearl,” a single nowhere in the world, yet my absolute favorite Roxy Music song, was duly accounted for here. As Isaac Hayes would say, “daaaaaaaaamn right!” The cover by Mick Haggerty was a wonder with a gilded butterfly-wing fabric [?] background texture with a gold plated album sitting on it, subtly reflecting the traditional glamour muse model in the label area. I will admit that I pilfered the distorted reflection concept for my own JAPAN boxed set cover. I should play it to see which version of “Pyjamarama” it features. 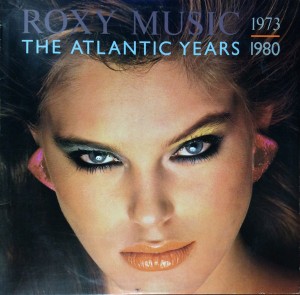 This was compiled by Atlantic Records, who held the license to Roxy in America for many years, but that didn’t stop it being released all over the world. Including the UK. Track selection is a bit strange, to say the least, but at least it only has two tracks from the previous “Greatest Hits.” I looked up the cover model on Discogs and she had hooked up with John Taylor of Duran Duran for several years following her usage on this cover. I don’t suppose that this cover had anything to do with their relationship? I believe my wife picked this up at a garage sale. She has a good eye. It’s the Peter Saville cover.

This was the first, but not the last, compilation to round up Ferry’s solo career with that of Roxy Music. How many other group leaders have their solo efforts so easily bundled together with their famous band like this? At the time I bought this, it was my only copy of “Pyjamarama” on CD, and no. I don’t know which version is here off the top of my head. It’s a good compilation for its time period with “Slave To Love” getting the nod of approval. At the time it was vital for me to have at least the singles from “Flesh + Blood” on CD format as I waited a long time for Virgin to re-issue that one on CD in the 90s. Plus, it had “Jealous Guy” on CD for the first time. The cover image of Ferry came from the early video performance of “Re-Make Re-Model” [I believe] and was nicely colorized by Keith Breeden. Apparently, this was sold with a TV ad campaign in the UK.

Only two years later another Ferry/Roxy comp hit the streets! A third of the songs were carried over from the last compilation but there were a few bones tossed to fans. “Let’s Stick Together” was a 1988 remix, the first post-modern Roxy Music remix [Bruce Lampcov/Rhett Davies], but pretty harmless. “He’ll have To Go” was another lost track from the “Bride Stripped Bare” sessions to resurface when they needed some new blood. At least the version of “Jealous Guy” was unedited here. The previous compilation had over a minute trimmed off. The best bait here was the “Help Me” single [Theme from ‘The Fly”] on the shiny silver disc. After passing up “Don’t You [Forget About Me]” Ferry made up for it in earnest in doing lots of movie themes. This was one of the good ones. The cover by Michael Nash Associates looked like something for the Japanese market. A bit perfunctory.

Wow! This one was The Bomb when it came out! The Roxy Music Boxed Set for the hardcore fan. The first three discs compiled highlights of the band’s seven studio albums. If this had been a 5xCD box, they could have fit everything on it in a “Police “Message In A Box” fashion. That said, “For Your Pleasure” was only missing “Grey Lagoons.” The real pull here for people like me with all of the CDs already, was that only the early version of “Manifesto” on LP had the original versions of  “Dance Away,” “Angel Eyes” on it. All re-pressings and all of the CDs opted for the very different hit single mixes. But that was nothing compared to the grail-like bounty of the fourth disc. All of the non-LP A/B-sides were here…mostly. The live B-side of “For Your Pleasure” was absent. The version of “Pyjamarama” here differed from the one of “Street Life.”

But there were mistakes made. “The Numberer” was in mono and the abstract ambient “South Downs” had its channels reversed. The cover looked like leftover “Mamouna” photography from the year before, but this was quite the thing to have, back in the day. The booklet was riveting reading. I’m still waiting for that Roxy Music coffee table book!!! The discs had outtakes of the album covers printed on them. I was very happy to have received this as a birthday gift from my wife after it came out and I don’t even remember dropping any hints!

It was a dozen years later since the last Bryan Ferry/Roxy Music compilation… time was ripe for another! A few tracks even came from Ferry’s 1999 solo album of jazz age covers, so it was up to date. The emphasis on ballads made this a canny product for the “VH-1” Ferry fan who didn’t want tracks like “Mother of Pearl” shaking things up. A few rarities surfaced here to ensare me. Hardcore ferry fans had already bought the OST to “Threesome” years earlier to get the excellent song “Is Your Love Strong Enough” from the [terrible] Ridley Scott movie “Legend” but for anyone else, that was a great reason to buy. “Sonnet 18” was a Shakespeare adaptation made for the Princess Diana tribute album [of course, Ferry would suck up to The Royals!] and since there was no way I would ever buy that, this was a boon for my collector’s gene. And finally, the mystery track “This Love” only ever appeared… here! The cover by Swedish designer…John The Fisherman[?] was perfunctory. 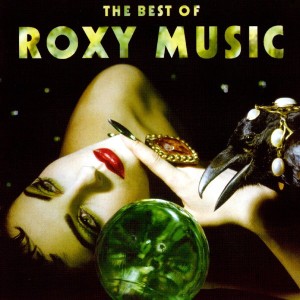 When we saw the mandatory Roxy Music 2001 world tour [twice!] of course they had to put another compilation out! Like most, this one had the edit of “Jealous Guy.” But the track order went in reverse this time. Ooooookay. I only just got a version of this since it was hardly mandatory, when I chanced across a SACD of this in the bins of the local Mr. Ks priced as if it were the conventional CD. The fools!! I’ve learned that DSD mastering is usually worth paying attention to for the best analog transfer you are likely to hear, and even though I don’t have a SACD player in my possession, many SACDs are hybrid discs with a CD layer that can be ready by any CD player. Like this one.

I’ve found that the DSD mastering makes a difference even when dithered down to CD resolution. I’ve not yet given it critical listening but word has it that this is the worst of all possible worlds: a DSD mastered disc with brickwalling! Well, for what I paid I was willing to find out! I’ve already got the T-shirt and program book with this art… why not go for the SACD? That’s Susie Bick a.k.a. Ms. Cave on the stylish cover.

Disc 2 – For Your Pleasure

And finally, we have…this! All things to all people, the 2012 studio boxed set that while it lacked any live albums from the band, bent the rules just enough to give us the one live B-side the band released! All of the albums are in gatefold laminated cardboard sleeves with inner sleeves. Even the ones that were never gatefold. But the reason to buy is more than the 2003 remasters of the albums. This time there was two CDs packed with every conceivable rarity. 7″ edits for the USA? They’re here. The Canadian 12″ remix of “Angel Eyes?” Heck, I didn’t even know about that one until I got this set. The ne plus ultra of the Roxy Music fan’s collection.

Strangely enough, there are only a few Roxy Music comps missing from my collection. The main one I don’t have is at left, but I do have the all-important [at the time] JPN laserdisc version of that title that was packed with Roxy Music and solo Ferry music videos! I never set out to collect this many compilations, but the manner in which they trickled out was most sly indeed, ensuring my eventual purchase most of the time for one track or another. It helped that none of these were purchased as as new items [save for the gift my wife gave me].

29 Responses to Just How Many Roxy Music Compilations DO I Own, Anyway?