Posted on November 7, 2019 by postpunkmonk

Then the album sauntered across the finish line with the sequel to “Night Spots” called “Dangerous Type.”  This made for a hat trick of Farfisa New Wave tracks with the sound of “96 Tears” cheek by jowl with the glam rock chug of T-Rex’s “Bang A Gong [Get It On].” [as it was known in America to any of the pedantic Brits reading this]. The song was actually finished by the 3:00 point but seeing as it held the ultimate position on the album it was allowed the luxury of a 90 second coda to reach for the necessary gravitas. At a still trim 4:31 it was the longest song here.

The DLX RM then had another six tunes to flesh it out. The monitor mix of “Let’s Go” has some, but not all, of the earmarks of the final arrangement for our examination. The vocal has a casual quality to it, and the engineer has de-emphasized it in this mix. Crucially, Ben Orr [or perhaps the producer Roy Thomas Baker] had not yet arrived at the notion of delivering the vocal hook on the line “she’s so beautiful now, she doesn’t wear her shoes” by rising an octave on the last two words. And now we know why this was just a monitor mix.

Several songs were recorded at Northern Studios in addition to the final material, which was recorded in Cherokee Studios. The Northern Studios version of the title track featured a great vocal by Ben Orr, and a rare instance of the bass being high in the mix [it’s almost nonexistent on the album] but the distinctive sequencer hook running through the song was not there, and Elliot Easton’s solo was obviously in rough draft form here. “Night Spots” was very close to the form it eventually took. The vocoders were not there, but the Northern recording was 30 seconds longer.

Similarly, the great “Lust For Kicks” monitor mix also buried Ocasek’s vocal and emphasized the band playing, and it was also 30 seconds longer owing to a Greg Hawkes solo in the number’s coda. The Northern take on “Dangerous Type” revealed that the song was just fine at 3:30 but it never would have passed muster as the final song had it been that brief. Giving it some room in the album was the right decision. But the guitar boogie dominated the song without the keyboard Farfisa melody lines to offset it. That was an important addition to the song. 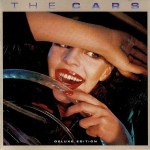 Finally, two songs not on the original album ended the program. “They Won’t See You” was one of the early songs that showed up in demo form on the DLX RM of “The Cars.” Here it was a more finished recording that was very hooky New Wave that was nonetheless discarded as the notion was to write new material going forward and to jettison the older, unused material [with the exception of “Night Spots” which was just too damn great to lose, in my opinion]. I found it stronger than the one non-LP B-side here, but the somewhat annoying backing vocals were a demerit for sure.

Finally, the non-LP B-side of “Let’s Go” was finishing up this CD. “That’s It” had a loaded title, considering how slight the tune was in comparison to “They Won’t See You.” Ben Orr took lead vocal duties as he had on the A-side but since all of the songs here were Ocasek numbers, maybe Ric was being expansive with the vocal duties in recompense for no Orr-penned songs this time.

I have to say that time has been very kind to this album. We all know the debut forwards and backwards, right? It’s a classic for a reason. And the less loved third album “Panorama,” somehow made a lasting impression on me with very few plays, comparatively. Even so, I was prepared to have a dim view of “Candy-O” that was absolutely not merited by the actual music it had to offer. To use a Prince metaphor, if “The Cars” was “Purple Rain” then “Candy-O” was their “Dirty Mind.” Some might think that “Heartbeat City” was their “Purple Rain” but that’s only true if we regard the sales success. I’m talking about the artistic success.

Quite frankly, I think that many of their best songs were on offer on “Candy-O.” The debut was forward thinking pop rock that flirted with New Wave but this album makes a real commitment to that genre. The synths didn’t dominate heavily but they shared the melodic development of the music 60/40 with the guitars. Elliot Easton let Hawkes do most of the heavy lifting; preferring to be a team player until his concise, vibrant solos were given the spotlight. His tone shifted throughout the album, making the solos eclectic but well worth the 2-4 bars he was given to use.

The album that followed sounded like they had been listening to lots of DEVO and they ran with it. Only to see a precipitous fall off in sales and popularity. Then the triangulated back to a safer form of pop rock that I had little interest in listening to going forward. “Shake It Up,” “Heartbeat City,” and “Door To Door” were albums I’d only ever heard the music videos for. The Cars had not been very central to my listening but after 1980, they were less than that. But “Candy-O” was a much more interesting album than my overall memory had painted it as. Sure, sure. “Shoo Be Doo/Candy-O” was amazing, and made a huge impression, but there were some other very strong deep cuts here to flesh out the album. “Night Spots” and “Double Life” in particular showed the band moving deep in to the New Wave genre. Quite frankly, I can’t think of any track by anyone, be they New Wave or Post-Punk, that competes so strongly with the likes of “Warm Leatherette” for a neck-snapping level of sonic violence as did “Shoo Be Doo.” I doff my Aztec Energy Dome in awestruck reverence.