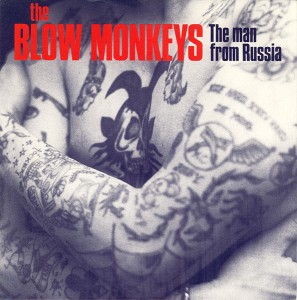 I was intrigued by The Blow Monkeys after seeing the unbelievably smarmy video for “Digging Your Scene” and sharing it with my friends, as we did back then. My friend Tom made the first move and bought “Animal Magic” and when he shared it with me, it was definitely one of the bright spots of the mid-80s. We both became fans and collectors after he took the first plunge. So much of the band’s sound called back to the pre-punk 70s that it gave them a cachet of individuality as they swam against the tide of the increasingly clueless mid-80s.

This is a song that, once played, can get stuck in my mind for hours. I’ve been singing it to myself all day thus far and I’m still not sick of it. For my money, this was the transcendent single from the Blow Monkeys debut album, “Limping For A Generation.” However, I first encountered it in 1985 on the B-side of the “Digging Your Re-Mix” UK 10″ single. The version there was a 3:26 “re-mix” by Jeremy Green, but it’s really a completely re-recorded version that was much smoother, in keeping with the “Animal Magic” vibe of the second album. Either version gets The Monk’s nod as an unbeatable pop song. I play whatever is easier to hear, so that means that 99% of the time, the original mix on either of my “Limping For A Generation” CDs gets the nod.

The song was a showstopper of dark camp that singer Dr. Robert gave his most florid delivery. The cover had a clue by way of the fully tattooed man depicted. Back in the simpler times of 1984, the only such “man from Russia” who looked like that was undoubtedly a criminal. Tattoos were far from being mainstream then and the Russian Mob used them to mark their men. The lyrical scenario suggested a homoerotic relationship between one such man and a younger one who remained possibly naive about the whole scenario.

“I just lost my soul in the snow
And I just lost my pain in this rain, yeah
Was I too young for that boy to come
The man from Russia
Whoa-whoa, yeah” – “The Man From Russia”

The melody and production here was warm and acoustic with no synthesizers [yet] on the horizon for the band. The song was one of The Blow Monkeys’ earliest with bassist Mick Anker atypically sharing credits with Dr. Robert. The only synthetic moment came during the middle eight with Neville Henry’s chorused saxes playing an Eastern European melody while drummer Tony Kiley switched from his acoustic kit to Simmons drums in a move that made the bridge all the more jarring.

The B-side on 7″ was the relentless “Resurrection Love” which occupied the same “punk jazz” space as “Trashtown Incident” which closed out the Blow Monkey’s debut album; albeit at half the length. It’s use as a B-side therefore made perfect sense. only one of these songs was destined to close out the first album, and it was not the shorter one.

The prize on the 12″ single, since there was no extended version of the A-side, was the extra B-side, “Slither.” The swaggering instrumental began like a next-of-kin to “Peter Gunn” before the unexpected free jazz breakdown at 1:20 took the song in a completely different, altogether more dark direction. First Dr. Robert took a minor key solo that was all sharp angles before Neville Henry unleashed the skronk while Robert contributed organ drone over the increasingly skittering drums of Kiley as the song ultimately retreated to the shadows to lick its wounds after having inflicted more damage on the listener.

This was only the band’s third single ever [their second for RCA] but within a little over a year, the Laughing Clowns influenced “punk jazz” band would have a worldwide hit single with “Digging Your Scene,” whose success made me hungry for more. As usual, the earlier, commercially unsuccessful material made me an even bigger fan of the band. The Blow Monkeys would continue to mutate and make whatever music they wanted to hear over the next six years before taking a 17 year break before regrouping in 2007. It pains me that I still don’t have the band’s 2009/2013/2015 albums, which tend to be extremely scarce on the ground in the USA.