Posted on September 4, 2019 by postpunkmonk 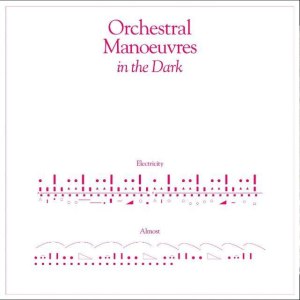 It seemed like only yesterday when OMD was releasing a BSOG® to celebrate their 40th anniversary. Well, I hope you pre-ordered one if you wanted it. The OMD webstore was sold out within a week. There was no way I could find the funding for that one under such battlefield conditions. How I detest this high-pressure “BuyThisNOW” world we find ourselves in. Well, it turns out that OMD have only begun to work that 40th anniversary action. Last week, while I was out of town, the notion of their new 7″ reissue of their debut single dropped. 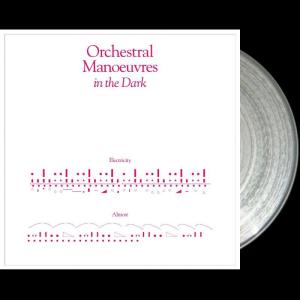 There have been many re-issues of “Electricity” b/w “Almost” and each one seemed different. This one will be very different. First of all the sleeve will be a radical variant of the famed Peter Saville sleeve. Sadly, the textured black-on-black thermographic printing will be a non-starter this time. Instead,, the cover will be white with the formerly textured typography rendered in… magenta? Of more interest will be the clear vinyl used for the disc itself. Bringing to mind many classic Ultravox 7″ singles of yore. Of the greatest interest will be in exactly which versions of the two songs will be doled out this time. 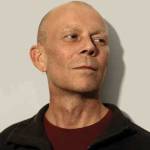 The A-side is said to be the original Factory Records first release version, which means it will be the Chester Valentino/OMD production of their debut. So that’s nothing new there. This time, it’s the B-side that may possibly move my hand. It will sport a Vince Clarke remix of “Almost” which is appropriate, since this single was what gave Clarke the synthpop bug 40 years ago. I can’t imagine Vince Clarke improving on the iconic Martin Hannett production of that brilliantly melancholic tune. Quite the opposite, as I envision him reducing its dolorous beauty into something altogether more perky. But since I have been trying to buy every one of the modern OMD singles on vinyl thus far, [I failed to get the “The Future Will Be Silent” and “Julia’s Song [dub]” 10″ RSD singles] the notion is to dump my bi-weekly stipend into this title.

Given that the original Factory 7″ is a solid three figures, I might have preferred to have a thermographic re-creation of the original 7″ single with black-on-black textured printing. If only to get a mint copy of this for <$150 just to gawk at. Then maybe they could have charged more than the "reasonable" $15/£11.99 for the actual disc here on offer. I would have paid $30 for such a pressing, but may still get this next week, once I get my mitts on my discretionary budget for next pay period. Of course, this modern hell-world of two figure 7" singles causes me no end of grief but that's how it is. If I fail to buy this now, I guarantee that it will cost more in just months following its September 27th, 2019 release date. If you also have an interest, buy it here.