REDUX: A Young Person’s Guide To Associates – “Heart Of Glass” 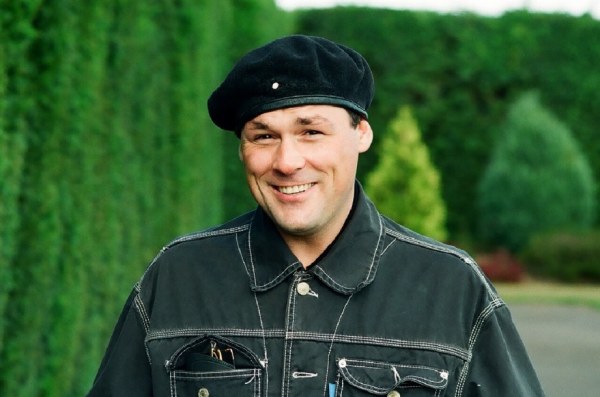 This smile could solve the world’s problems…but not his own. Billy MacKenzie © Gilbert Blecken

I think I actually first heart The Associates expansive cover of Blondie’s “Heart Of Glass” being played in a club! This was the pre-show disco for some show at Visage in Orlando during the late 80s-early 90s period, as I recall. At the time, I definitely did not have “Popera” by The Associates, so I had not a clue in the world, only noting that – hey, this was a great cover of “Heart Of Glass” with some guy singing! It’s hard to believe such naíveté now, but that was certainly the case. By late 1990 I was hip deep in my magnificent Associates obsession and by the end of the decade, had obtained the requisite original single forms of the release.

The initial 12″ was remixed by Robert Gorgon of FON Force and naturally reflects their acid house leanings. The cleverly named mix reflects the community in Dundee that Billy hailed from as well as the acid house sounds that Gordon brought to the table. Lots of bleeps instead of the somewhat grandiose showbiz technopop that original producers Chris Hughes and Ross Cullum provided sounds somewhat thin to my ears, though acid house usually has some pull with me. Had I not been familiar with the original mix first, this would have certainly passed muster as a fantastic cover of the Blondie classic.

The B-side contains the requisite instrumental dub mix, sans MacKenzie and therefore a lot less spectacular. More intriguing is the B-side, “Her Only Wish,” a nervy MacKenzie production that shows that he didn’t need Alan Rankine to make music that was fully worthy of The Associates name. The resulting track had a vibe that could have seen it rubbing shoulders with “Fourth Drawer Down” material, had it not used tech that didn’t exist in 1981. 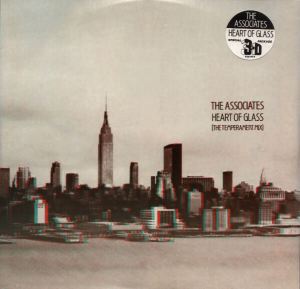 The anaglyphic 3-D printing [complete with tiny glasses] let the buyer know that this was not the other “Heart Of Glass” single. second 12″ was remixed by François Kevorkian and Goh Hotoda and if you loved the original 7″ mix, this is your 12″ single! The widescreen glamour of the original was expanded dramatically with every ounce of gloss and polish available, and it’s almost twice as long as the original experience. It managed to make the stellar original mix sound puny and impoverished in comparison. What more can one ask from a 12″ single?

Said original mix also appeared for completists, and so did the edgy B-side, “Her Only Wish.” Of greater interest to collectors of the MacKenzie muse, was the extra B-side “Heaven’s Blue,” which was exclusive to this disc. The brief, piano-led instrumental presaged the sort of music that MacKenzie would record later in the 90s, as part of his posthumous releases “Transmission Impossible” or “Beyond The Sun.”

Finally, it took a while to track this down, but I managed to snare the CD3 of this single, which in keeping with the tiny format, only had the short, single mix of the song as an A-side. “Her Only Wish” appears here in digital form, and the other two songs here are unique MacKenzie rarities on this disc only. The take of “Breakfast” from the “Perhaps” album was also produced by Martin Rushent but it is an alternate take to what had been released four years prior on the album and associated single. Finally, the version of “Those First Impressions” here is unique for the slightly longer drum intro that was edited off of all of the previous issues of this single from “Perhaps.” One would like to think that MacKenzie was particularly enamored of the drum fillips and lamented their excision on all previous issues of the song, and putting his foot down, demanded its appearance here. Note to self: I still need that 7″ single of this!

4 Responses to REDUX: A Young Person’s Guide To Associates – “Heart Of Glass”