For anyone reading this who hasn’t been hanging around for nine years or more, I took the name Post-Punk Monk for blogging when my friend saw an elaborate boxed set of god® that I had made. He likened the one-man research/purchasing/remastering/design effort as being like unto a monk copying an illuminated manuscript by hand. When I was searching for a name to begin blogging under, it took me all of an hour before I hit upon this branding I have used. It was just too natural. Especially in the olden days, when I would manually denoise clicks and pops from vinyl by hand using the effective interpolation filter in Sound Studio, which could work near miracles when carefully applied. Sometimes songs would have several hundred time-consuming manual edits to achieve the clean sound I shoot for.

So I have created dozens of CDs from my vinyl collection since that’s the way I like to roll. There’s no better creative thrill than holding and regarding the actual CD of [fill-in-the-title] that would never in a million years be actually reissued by a real label. Except that such hubris is often punctured by reality. Many was the time that I would have invested dozens of hours of scant free time making a CD that eventually would come to market for real! This then, is the story of those times that it has happened. 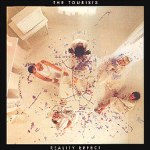 One of my earliest efforts was of the second, miraculous album by The Tourists; the earlier band that Annie Lennox and Dave Stewart made three albums with before forming Eurythmics. My copy was sourced from mostly CD compilations of the band but two tracks came from a Portuguese pressing [the only one of the original UK pressing/track listing] that I have ever been able to find. If you’ve not seen or heard a Portuguese pressing, I wouldn’t be surprised if the label simply mastered what they released form another UK vinyl copy. It looked and sounded like a pirate copy, but was probably legit. BONUS TRACKS: I filled out the disc with a BBC transcription disc concert recording from this tour.

In 2007 I was floored to see this under appreciated album get a release by American Beat Records, a small US reissue label. But there was a hitch. They licensed the US Epic Records version of the album. ironically the one that made me a huge fan in 1979, but Epic had swapped out the two less than perfect songs from two singles cribbed from the first Tourists album [which had never been released in America]. So this disc, which I should have, was slightly off-putting to me. That said, the US edition was that much better than the original UK running order of the album, so I’m ambivalent about this version being the only one on CD. I should buy this before it’s three figures. It’s getting there now!

In 1999 it didn’t look very likely that the fourth Associates album would get a release on CD. Billy MacKenzie had killed himself two years prior, but there looked to be limits on the commercial exploitation of his back catalog, which had been criminally under represented on CD at that point. I remastered the album from a Germen Teldec LP pressing I had. BONUS TRACKS: I used the long 12″ single versions of tracks like “Waiting For the Loveboat” and “Those First Impressions,” which were transformative in their full length versions.

I was wrong about the MacKenzie legacy not having the movement. Three years later WEA reissued not only “Perhaps” but also the unreleased follow-up album of legend “The Glamour Chase” in a two disc edition. The bonus tracks were scant. Just two on “The Glamour Chase,” but beggars can’t be choosers. I decided to roll all Associates rarities into a BSOG that was started but never completed…yet!

2 Responses to Scooped! When Personal CD Projects Get Superseded By Real Labels [part 1]