I’ll wager that for many of my generation, this might have been the first Japanese import anyone reading this may have bought. There were practical reasons why. Japan was ground zero for Durandemonium as the band [surprisingly to their notions] became teen-beat stars in Japan first, before pubescent females worldwide eventually joined them in plastering photos of the Phab Five on their walls. Naturally, Toshiba-EMI worked that action like pros by licensing single tracks and cobbling together this first of many foreign DD EPs for the local specialty markets. They probably sold tens of thousands of this for export only. It is, reliably, a record that I see at least twice a year shopping for records even 36 years later!

Due to the enormous popularity of DD by 1982, this EP got imported pretty much everywhere where records were sold. It was the first Japanese record I every remember seeing in stores, that’s for certain. It graced many an import section I recall browsing. We all got introduced to the notion of the obi [see left], or paper band with the Japanese kanji text so that buyers locally would be able to know what the record was about if they didn’t speak English. If one could read Japanese, this would probably be like a deluxe “hype sticker” and every release got it. One of the most interesting things about obis was that they told you the date of release for the record, but also had the price listed on it. This EP was ¥1,500, or about $15 US dollars. US importers usually placed a premium on Japanese records, so this went for $15-20, back in the day. I did not buy it new, but found a used copy at Crunchy Armadillo Records some time in 1983, I’m guessing. It’s been in the Record Cell ever since. I bought it because I already had the “Careless Memories” UK 12″, where the two non-LP B-sides here came from. As I’ve already written about those, we’ll concern ourselves only with the “Nite Versions” available here. 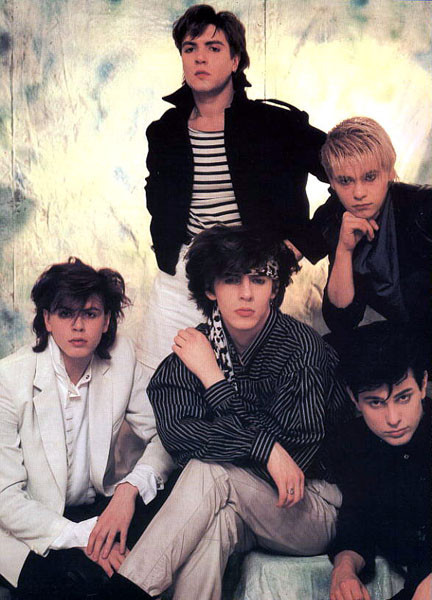 A ca. 1981 shot of DD when Nick was in his shocking brunette phase

I had bought the US pressing of “Duran Duran” in 1981, so US Harvest Records [a budget line of the Capitol Records mothership] had already messed around with the running order of the album. The 12″ version of “Planet Earth” was included instead of the 7″ version and the LP deep cut “To The Shore.” The Nite Version of “Planet Earth” was heavily indebted to Chic with its in-your-face disco bass lines courtesy of John Taylor. JT was probably the most talented member of the band at this point as I thought his bass work on the album was pretty good. The long disco buildup on this version had John Taylor performing bass solos; trading licks off of the sax player [presumably Andy Hamilton]. Then the song was a slicker arrangement of the song going forward that threw out niceties like the [interesting] middle eight on the 7″ version to be a more propulsive dance-floor filler.

The Nite Version of “Girls On Film” sported a new arrangement that gave the song a new backbeat bite that added some complexity to the song. Roger Taylor added even more timbale fills here and there which contrasted nicely with the synthetic claps. As with “Planet Earth” they stuck to the tried and true “long slow buildup” paradigm for crafting an extended version. It’s perhaps telling that at the early stage of the game the band made a new arrangement of the song that was longer and re-recorded it! They [or apparently producer Colin Thurston] had not known that in most cases, the multitrack was remixed to create a 12″ mix! It’s for this reason that the Nite Versions here are so endearing. “Girls On Film” was never a favorite, but the version here had a little more class than the straightforward pop of the 7″ version.

The success of this Ep probably led to the practice of making EPs for many of the world markets where DD records were suddenly selling big in the next few years. This was the first shot of the starting gun, but eventually releases like “Carnival” would be issued in multiple countries [even America!] with different covers and contents for each territory. This continued for at least another five years as Duran Duran had their five year run at the brass ring.