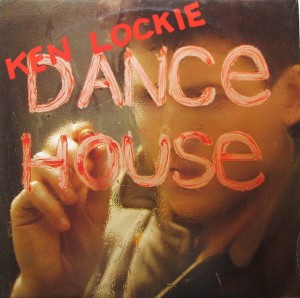 I was en route to may haircut yesterday when I thought I had a spare 12 minutes to stop in at Harvest Records and window shop. I had a little cash with me and the impulse was there. I saw the used CDs with the ultra synchronistic Cabaret Voltaire title “Methodology ’74 / ’78. Attic Tapes” a 3xCD collection of proto work that Mute issued in 2003 when I absolutely could not have bought a copy. At $24 they are ahead of the Discogs mean price, so I was not going to bite. Besides, I  only had $16 “mad money” in my pocket. I saw a copy of another timely title: The Human League’s “Credo” in the $3.00 bin. Where I live, everything is so expensive our cheap CDs are not one dollar, but three. I wanted it, but not right now. Then I saw that their previously anemic New Wave/Punk 7″ bins had swollen since my last visit. I looked. I gasped.

Among the nice selection there was something I was not leaving without. Ken Lockie’s “Dance House” 7″ single. I have two copies of Lockie’s “The Impossible” solo opus awaiting remastering in my Record Cell to digital forms, but I was awaiting the singles from it to get the needed bonus tracks for any REVO edition I would make. I bought the disc and took it home last night to quickly digitize it. It only helped that it was 6:10 of music en toto. I am a big fan of Cowboys International. How would this compare?

Yow! Right from the start this sounded like almost nothing I had ever heard before. Over a stomping beat punctuated by shrill 8th notes of synth and funk bass, there was nary a guitar to be heard on the track! But what it did have was Lockie on sax. His elephantine braying sprawled all over the lurching funk of “Dance House” while his vocals kept the melody moving along with the dominant rhythm section until it all ended abruptly before even three minutes had passed. Wow. What had just happened here? I’m reeling.

The B-side was a different proposal entirely. It actually had some sonic footprint that was semi-recognizable to my ears. Imagine the sinister circus march of Simple Minds’ “Garden Of Hate” with the drum track from “New Warm Skin” overlaid on top of it. This time there was guitar audible. Ken Lockie and Simple Minds had guested on each others’ 1981 Virgin albums so they were obviously a mutual admiration society of sorts. As I listened to Lockie’s yelping vocals I thought to myself that “I don’t think I’ve ever heard anyone sing quite like him,” only to in the next 20 seconds realize my error. Good lord, Tim Booth of James had obviously listened to a lot of Ken Lockie.

I can only imagine that Virgin Records might not have known what to make of this sound from Lockie. It’s further afield from the Post-Punk sound that Cowboys International made, and I have to say that I appreciated the eccentricity of it, even if the label might have had fits wondering how to market this lurching, idiosyncratic  music in the increasingly aerodynamic musical environment of 1981.