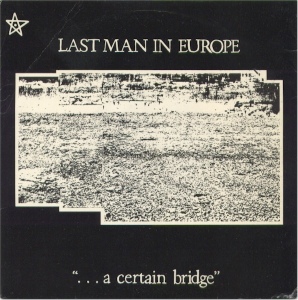 This was a band that I first heard of in the advertising flyer included with the Bill Nelson boxed set of 7″ singles, “Permanent Flame.” They were one of the other bands signed to his indie Cocteau Records, but it remained until four years ago during a trip to “Time Traveler Records in Akron before I actually saw a copy. At this point in time, I’d buy any Cocteau Records release that I don’t already have [and I have quite a few…] so I plunked down my $1.99 only to discover that – gloryoski! This release comfortably sells for $25-50 on Discogs. Let’s see if we can find out why.

The raw rhythm box chug and the swooping synth fading up recalled nothing so much as the sound of 1981 on an indie budget. The rhythm loop was a close cousin to the one in The Nails “88 Lines About 44 Women.” Eventually guitar, synths, and drums came to an agreement and the groove percolated along for a few minutes without much change. The vocals on the “A Certain Bridge” had a whiff of Positive Noise in his declamatory insolence. Only two bars of a portentous descending guitar figure that marked the [brief] bridge provided any variance here. The inconclusive song lasted almost six minutes to little change in tension, though to its credit, it seemed only 4:30 long. ironically enough, there is a 4:11 edit that appeared on the “Cocteau Signature Tunes” compilation years later. Here it is for your inspection.

“T.V Addict” had a similar reliance on a programmed rhythm but the guitar and bass were much more prominent here; resulting in a sound that felt a little closer to early Bauhaus without putting their boot in. The song was presumably the sequel to The Normal’s “T.V. OD.” The final track, “Complications” featured a lurching beat that was front and center; dominating the guitar and synths. But it was the perkiest song here. The berserk and tasteless synth solo at the song’s surprising coda felt like a conscious attempt at some Enoesque thrills ca. “Roxy Music.” But that outburst showed, finally, some signs of life with Last Man In Europe. Their reliance on canned rhythms lent their songs a sort of plodding dullness that this one finally rose above to put the boot in. 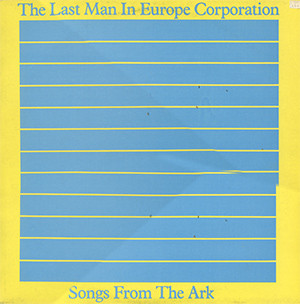 On the whole, the band’s debut single was typical of its time, I suppose, but with not much in the way of dynamics in their arrangement; synth freakout solo at the end of the record aside. This was the only release by Last Man In Europe, but the next year there was a personnel and [slight] name shakeup with them becoming The Last Man In Europe Corporation. New vocalist Paul Martland sang on their sole Situation 2 release, “Songs From the Ark.” And that album’s also going for decent money, so one mustn’t discount the lure of the “minimal synth” sound in today’s crazy vinyl aftermarket. It irritates me that records that seem worth <$10 to my ears are commanding many times that and I can only say that I would barely give this release the time of day even at $2.00. Even Bill Nelson’s production here sounded perfunctory.