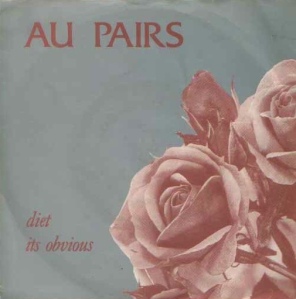 Wow, I really remember seeing the debut album by the Au Pairs all over every import bin in town back in late ’81-early ’82. Considering that the band were on minor UK indie label Human Records, it’s staggering to me now to realize that the label somehow exported what seemed to be a truckload of the LP to the USA. By its ubiquity, I had assumed that this was undoubtedly a big thing in the UK music scene. By the same token, I never managed to hear Au Pairs at all. Not the first note, so I never took the bait. 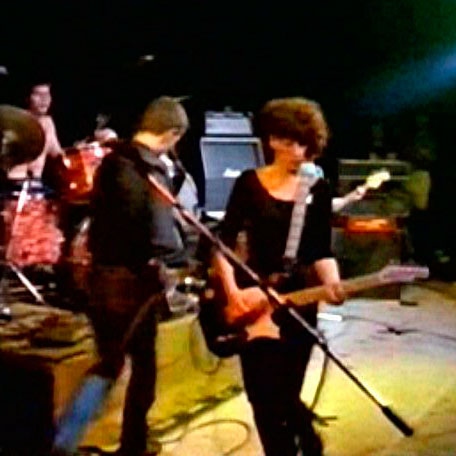 It was down to my making a DVD of a ßeta video of “Urgh! A Music War!” that I finally heard Au Pairs in 2012 and determined that I should have their music in the Record Cell. It so far has come down to their 1980 single here. Both sides were included on their debut album, but since I don’t have it yet, I’m not certain if they are the same versions. “Diet” opened with a spare, minor key guitar figure not a million miles away from B-52’s same gambit on “Quiche Lorraine.” But in service of a song that was diametrically opposed to the B-5s’s world of fun. Lesley Woods pained an incredibly bleak portrait of a woman desensitized completely and eroded by her role of a wife and mother. the plodding march beat was enlivened only by the tension of the thin, trebly guitar. The sound here was not far from the ground zero of early, TVLKING HEVDS ca. their debut. But there is no sense of any of the joy or abandon that crept into the margins of Byrne’s songs. The subject here needed to be tranquilized. Not only did she not have any political views; she had no views at all. Devastating stuff.

The B-side, “It’s Obvious” was a longer, slightly more upbeat track that flirted with latent ska energy as it examined gender roles in a modern relationship of equality with a more ambiguous bent. The chorus only concluded “we’re equal, but different [it’s obvious],” as the chorus repeated in the cods many times before coming to an abrupt, cold ending.

Not surprisingly, the band covered David Bowie’s congruent “Repetition” from the previous year’s “Lodger” on their own album. Lesley Woods had a lot to say about the roles of women in relationships and society at large. The music that accompanied this was similarly enervated as with Gang Of Four, but their lyrical stance was far less didactic. I feel that the music hit closer to the TVLKING HEVDS end of the spectrum. It’s much less groove oriented than either of the other two bands.

One fascinating aspect of these songs was how Au Pairs baked feminist thought right into the band itself, formed here by a pair of women and men. It was interesting noting how guitarist Paul Foad supported the lead vocals of Woods here in much the same way that countless women have sang backup on a male singer’s songs. Foad contributed something closer to spoken word echolalia for the dominance of Woods lead vocals. And he was mixed down low to add his part with much subtlety. I’m very impressed [39 years late] by Au Pairs, much to my chagrin. I need to buy this sooner than later.