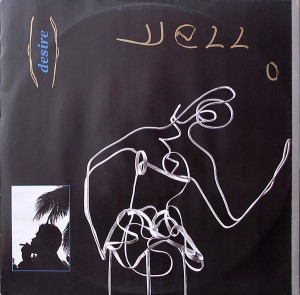 Collecting Yello meant that I would end up with a lot of releases from mostly three countries since their market was pretty diverse. That meant Germany, the UK, and America predominated in my collection, with some titles getting a release in one country, but not another. If you wanted everything, it was best to snap up what you could with no regard to a “perfect collection.” Since Yello were Swiss, the “native release” was generally the German/European one. Most of my Yello singles that I had up to the point of this single were US releases but I never saw anything but the UK releases for two of the three singles released from their fourth album, “Stella.”

I remember when “Desire” was in the import bins at my local Peaches. That meant that this cost me $5.95 in 1985 dollars. I think that import 12″ singles were generally $5.00 until that year. This was from the summer of 1985, and was the first single I bought from “Stella,” which I already had on CD possibly. I do recall that was the first Yello album that I heard on CD format as a new release as it had come out in January of 1985, with the import CD probably reaching my local Peaches by the early spring at the latest. Peaches was the bomb for import CDs in that era. Almost singular among the bands I collected, the first CD by Yello would be one of the few that was not a big letdown. For all of the coverage that “Oh Yeah” eventually got [and deservedly, in my view] “Stella” still remains one of my go-to Yello albums that I would probably grab right after “Solid Pleasure” if a tornado was coming.

The extended version of “Desire” was a tasty serving of Yello at their suave best, and as we know, that could be extremely smooooooth. The track opened with sampled shaker and gradually, real drum fills courtesy of Yello’s human drummer, Beat Ash, peppered the rhythm and distant peals of the yearning guitar of Chico Hablas pulled us into the song. Meier was delivering another of his late night noir melodramas this time, and at almost a minute in, the solid, four-to-the-floor beat [it sounded like a drum machine] laid a claim to the song to give it the solid impetus it needed to cruise the night streets until dawn.

Hablas’ guitar delivered a smoldering solo halfway into the song that was all the most powerful for its brevity and economy. The middle eight of the 12″ version was a dub breakdown of the song for the better part of a minute before the song circled around for a return bout as Meier painted an image of a former night traveler preparing to move on in the morning after.

“Morning heat puts a thin film of sweat on my face
A little man, his eyes half closed
Puts chairs on tables admires his work
And collects a quarter from the floor
I head over to Broadway where I watch myself
Having a slow breakfast
Trying to impress the barman with a fresh voice
When I ask for the bill” – “Desire”

To hear this 12″ mix and see the extended, Cuban travelogue meta-video by Deiter Meier, click here. Yello did not allow for embedding.

We all are more than familiar with the ubiquitous “Oh Yeah.” I have to admit that the cartoonish confection was an early favorite of mine when I bought the album, and the ensuing playback of that tune in a myriad of film and advertising settings in the last 35 years have dome little to dim my view of it, but if you are not able to say that, then perhaps the Indian Summer remix on the B-side of this 12″ might change your mind.

Rather than it being a goofy sonic cartoon, the entire vibe of the track was altered by this remix. The intro was a slow, orchestral swell fadeup that eventually cross faded into the pulsating rhythm that we’re more familiar with. But the change had already happened. This mix gained a minor key feel far more ambiguous than the original mix provided. And while the bulk of the song was not substantially changed [apart from having more interjections of Dieter Meier’s downpitched vocals, the cold ending was as expendable as the cold intro had been, and the coda cross fades into another cinematic mood piece as the vibe became deceptively chilling. I always appreciated the vividly cinematic arrangements of Boris Blank and it stymies me that he has not scored any films to my knowledge. I can verify that playing “Stella’s” “Stalakdrama” over the end credits of “The Terminator” improved the end of that film immeasurably.

In 1985 Yello were at the height of their imperial period, but the years following this would see their energies ebb and flow; generally to their misfortune as they eventually excised their durable drummer and guitarist to go full on electronic. Eventually, even marginalizing Dieter Meier’s presence in the band as well. But in 1985, all was right with the world and Yello. They were one of my favorite bands then, and this 12″ single showed them at the top of their commercial form.