It used to be that merging pop bands with orchestras resulted in kitsch-bombs like “Days Of Future Passed” by Moody Blues, but the best brains behind the more-influential-than-we-knew Visage Orchestral album have obviously sensed a trend. They also produced an orchestral album with A Flock Of Seagulls last year, and now August Day records has picked another UK New Wave band with a much higher profile Stateside than in the UK to get the nod.

Wang Chung have been in various states of activity from 1997 onward. They actually produced a [great] album called “Tazer Up,” in 2012 that has been DL only, so it has been lower of profile. They have toured both with and without core members Jack Hues or Nick Feldman, depending on either’s availability and inclination. When Hues was not there, Gareth Moulton of Cutting Crew has taken the lead vocal spot in those cases. Hues has had a parallel career with his own prog/jazz band, The Quartet. So they have been keeping busy but not so busy of late as when the band were swept away to join the Prague Philharmonic Orchestra in the creation of their upcoming album, “Orchesography.” 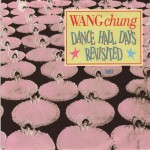 As usual, John Bryan and Sare Havlicek have been mixing and producing the sessions with the orchestra. With Hues having a classical musical education, his abilities were certainly up to the challenges of arranging the material for the new cost of sonic paint and he joined the production team with their usual arranger, Pete Whitfield in the writing for the orchestra. The album will be released on May 10th, but the lead single, a revisit of “Dance Hall Days” [but not “Dance Hall Days Revisited!”] has been out for almost a month.

The single is available in DL and CD5! We should all be so lucky, but August Day have never shied away from my preferred single format, so huzzah! The album mix is not a radical shift for the song. The song still has an effulgence that gives it a pass no matter how many times I’ve heard it in public. The Daniele Baldelli & DJ Rocca Vocal Remix deep-sixed the smooth orchestra for a clattery, synthpop re-build that sounded gimmicky to these ears. Better was the Kim + Buran Disco Mix which imagined the song as a Barry White Love Unlimited Orchestra production. The funky rhythm guitar slinked through it just right. The Psychemagik Remix was another gimmicky dip into the synthpop pool. Better was the Orcapella mix that isolated the reason why we’re all here; the orchestra.

So the single is a go for the Kim + Buran mix and the Orcapella. I might just opt for those two mixes as DLs, but since it’s actually a CD single, I’m inclined to take the “hard format” plunge. If I ever get some pocket change. We’ll find out what the full album holds in just 20 days; probably sooner as the wheels start turning. As for me? I’m laying odds that August Day will be calling The Fixx right about now with an offer they could not refuse.