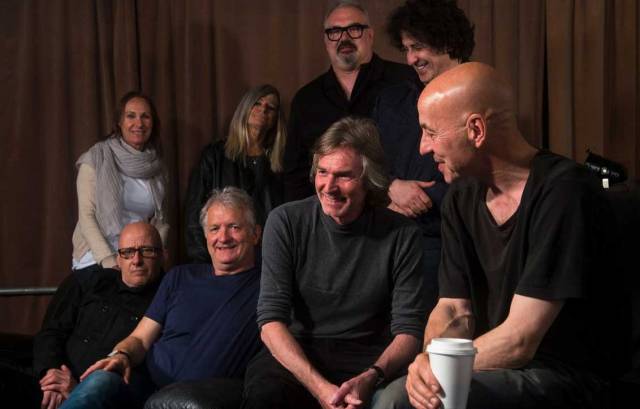 It’s 2019 and the band that Shriek’s together…uh… peaks together? Yeah, I meant to do that!

We’ve been deep in long threads [more to come soon…] and simply dealing with life, but the world never ceases turning just because we’re in the weeds. Last week Shriekback launched their latest crowdsource campaign. This time for their next album, rather than the successful… and unsuccessful  stabs at becoming a live band again in Europe and North America.  The last campaigns were on Kickstarter, but the music industry had flocked to the PledgeMusic platform…until they collapsed like a house of cards this February. Looking elsewhere, the band have opted for the Indiegogo platform to get the financial juices flowing this time.

“O Monk,” I hear you saying, “The band cut their crowdsource teeth in 2003 with ‘Having A Moment’ so early in the game that the word ‘crowdsource’ had not been coined yet! They have managed to release five canonical albums without any rattling of the virtual busker’s cup. Why this? Why now?”

In the background on this campaign, Mr. Andrews released that while it’s all well and good that the band can make albums on laptops and home studios scattered hither and yon, the last album was such an accomplishment, that they feel that to move forward artistically, they should get together in a room the old fashioned way and write together and bounce ideas dynamically off of each other.

¡Mamacita! If you mean to tell me that the wondrous “Why Anything? Why This?” was cobbled together in bits and pieces then I am well and truly amazed. By all means, let’s pitch in and get the band in the same place and see what magic will be the outcome. Goodness knows that OMD have benefitted from using that approach on their last two albums, and that is also the methodology that Heaven 17 has subscribed to for their next album [should it ever appear]. But the glory of the last Shriekback album was that I never would have guessed that it was made any other way. My bet is that if Shriekback pull off this latest campaign, then even the lofty achievements of album #14 could recede into the woodwork of revised history. So this money will pay for travel/lodgings/rehearsal studio time for the group to unite for this noble cause.

As with any crowdsource campaign, the buy-ins are highly stratified. Let’s observe:

Happily, after a week’s campaign, the band have netted a third [$10,766] of their $33,500 goal. But as we’ve seen, this by no means guarantees the finish line. On the further upside, only one of procured pledges has been at the highest [$2,600] level thus far. Meaning that the rest has been achieved via the middle range of pledges from $20-$260. None of the $650-$1300 price points have pledges yet. That gives me hope. As much as I’d love to drop $2600 on the gig, that’s surrealistic. I would like to hit the $39 price point but may have to just go for the $20 CD, which I will need in any case! Right now the budget is squeaking like a pinched balloon neck after all of this travel! The album will be ready in December, so this is on the front end of the process to ensure that it is the Shriekback album that we all richly deserve. Pledge by hitting the banner below!