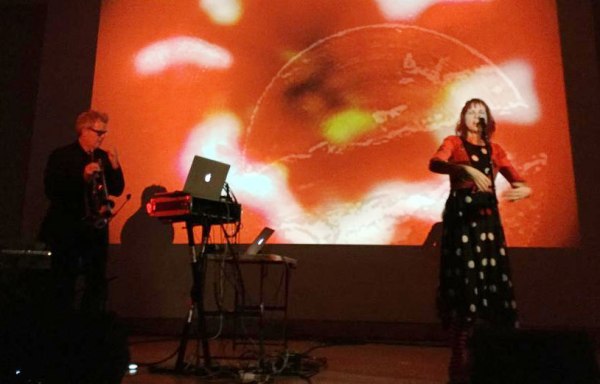 Saturday started for us when we were shopping for new sunning shoes and delved deep into the heart of suburban Knoxville to find a shoe store my wife had scoped out. I had immediate success with finding a pair of incredibly comfortable Asics to replace my aged gym shoes. My wife was not so lucky. We spent as much time shopping as we dared. We got back to downtown Knoxville and the Museum of art in time for Ian Chang’s show in one of the galleries, but we were already too late. The show was at capacity before it started and we were in the queue. Then he began playing at 2:00 p.m. and we realized that hearing that loud of an enhanced electronic percussion show in a small gallery was too overpowering. We opted to shop in the museum’s gift shop until our next show on the schedule; also in the museum. 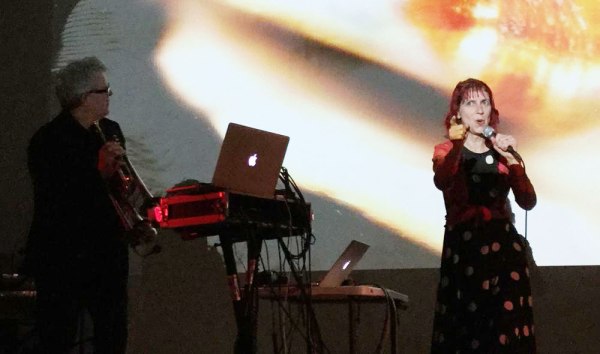 We ambled into the Ann + Steve Bailey Hall at the Knoxville Museum of Art, the site of the Joep Beving show from the previous day, where we assumed that Mimi Goese + Ben Neill would be playing. An audience had begun to grow for the 2:45 p.m. show, but fortunately, someone more clued in came by and told us that the show was in the KMA auditorium instead. Their music sounded promising. I was barely familiar with Ms. Goese’s origins in Hugo Largo from the late 80s so we settled in to see what awaited us. 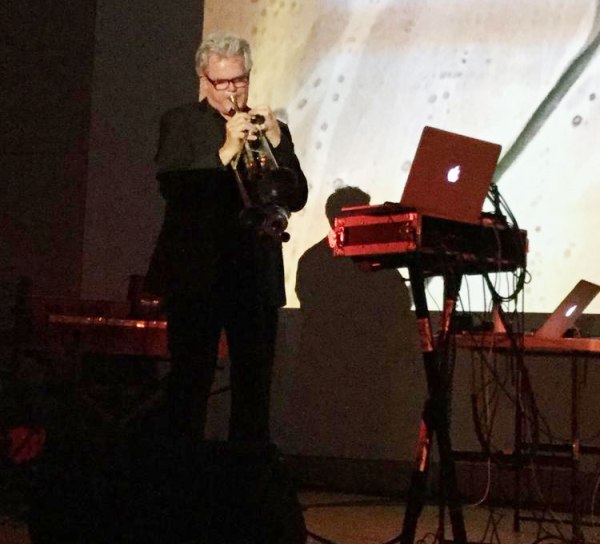 What awaited us was electrifying! After the damp powder of the Ian Chang performance we skipped, this was immediately explosive. The twosome proffered sometimes danceable art rock with a hi-tech under pining that saw multiple computers linked with Neill’s “mutantrumpet.” This was a three belled horn [one was a slide!] with heavy electronics embedded in it to allow Neill to manipulate the sounds occurring in dramatic and head-spinning ways. The closest thing to the vibe I could grasp for was early Björk, but I hate to suggest musical comparison. Musically, this had no peer. Neill was sampling loops from his instrument as well as Mimi’s vocals and manipulating them in real time on its hardware. Only in Ms. Goese’s intensity of performance could I make a valid comparison with the Icelandic thrush.

Mimi’s stage presence was riveting. Her cliché-free music and powerful voice was fully compelling as she sang and embodied the various points of view inhabiting her songs. Movement and poise was clearly an important part of getting her art across. Why was I just learning about her now? She seemed to be every inch the dynamic artist teamed up with a man who was determined to push the trumpet far past the boundaries that had held it back for centuries, obviously! They even managed to fit an astonishing cover into the mix with a version of the title track to Echo + The Bunnymen’s “Ocean Rain,” which Mimi introduced as a song to break your heart. Astonishingly, after their mesmerizing hour onstage, they actually returned for an encore. How many times does this happen at a festival set? Note: the row of Mimi’s siblings sitting behind us may have had an influence beyond our fervor. 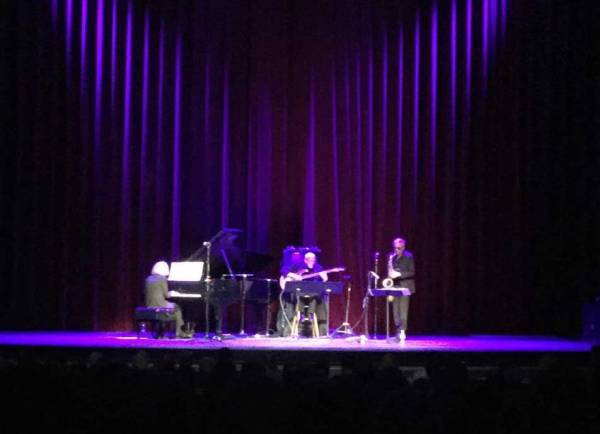 Modern jazz was the prerogative of the Carla Bley band set

Since I didn’t normally move in jazz circles, I first heard of Carla Bley in 1981 [two decades into her illustrious career] when she wrote and her band played on “Fictitious Sports,” the first Nick Mason “solo” album, which Nick just played the drums and percussion on. In the ensuing years I’d hear her name mentioned more and more as I became slightly conversant in jazz. When I saw that she would be playing here, I made a mental note to try to see her if there were no Budd conflicts. At 82, she’s the same age as him and this would certainly be the only chance I would get to see one of her performances. Jazz doesn’t travel  so well where I live.

We had plenty of time to get good seats in the Tennessee Theatre for the 75 minute set late in the afternoon on Saturday. The playing was crisp and exciting as Carla held down the pacing with Steve Swallow and allowed Andy Shepard carry the melodic invention on his expressive and peripatetic sax solos. While it’s hardly my main musical diet, I still have a taste for jazz and this was classic modern jazz from a woman who has a long and storied career in the field. Having led bands for over five decades, Ms. Bley was one of the first women to crack the boy’s club of jazz band leadership, so she has filled a role larger than that of simply “artist.” My wife also greatly enjoyed their set, and it pleased me to see her enjoying some modern jazz that was full of complexity if not dissonance. We stopped at the merch table on the way out to buy their latest disc. Interested ears may catch Carla Bley Trios at their next performance at the legendary Spoleto Festival on May 31st in Charleston, South Carolina.

Next: …Budd Is Love