Rafiq Bhatia begins the day with some psychedelia

I started the morning with Rafiq Bhatia at 12:30 but the guitarist was at The Standard and the next show was Joep Beving at the Museum of Art from 1-2:00 p.m. so some festival math came into play. I was able to hear two songs by Bhatia and it was interesting, but my wife would not have liked it as much as I did, so she was right to sit it out. Ian Chang was playing drums and we had added his set at the museum to our schedule. I left by 12:45 and met my wife so we could walk to the museum for Beving.

We got to the hall on the museum where Beving had begun at 1:00 p.m. sharp about 2 minutes late. I couldn’t help but notice that I saw Christina Horn of Hudson K sitting on a bench taking the show in. I had tried to get her set up with a concert date in Asheville but I think my effort was too little too late, but I had wanted to say hello to her after the show in any case. Beving was a huge Dutchman playing a small upright piano with the front panel taken off to show the action of the hammers. Interesting… I’d never seen this before but would later learn that it was not just for show. Beving played beautifully with a clean tone except for near the end of his set when he used a pedal to fill out the sound for one number. He then removed the damper that was on the strings for the last number where he really let it rip. His set was lyrical and passionate with some real fortissimo happening in the conclusion of his set. He had the crowd hanging on his every note. After he was done, the gent stood up, towering over the piano, red-faced as he had been playing very physically. After acknowledging the generous applause of the crowd, he quickly exited to the exterior of the building. As we left, I notice that Ms. Horn had left earlier, so I missed her this time. Maybe I would get another chance to say hello.

In just an hour after Beving’s set, it was time for the first of three Budd shows at the festival. We walked to the United Methodist Cathedral for the concert and there was already 100-200 people outside of the chapel queued up 45 minutes early. We got in line and a friendly chap in a red flannel shirt began talking with us. Over the course of the festival we would learn his name was Travis and he used to run a record label in his youth and was now transitioning to a life as a physical therapist. Making connections like this is one of the nice upsides to a festival. We waited as the lines [general admission, premier, and VIP were all separate for the venues at the festival] got extremely long. Until we could not see where they were wrapping around the building. At 1:30 we should have been entering to sit but that did not happen. Things were running late. 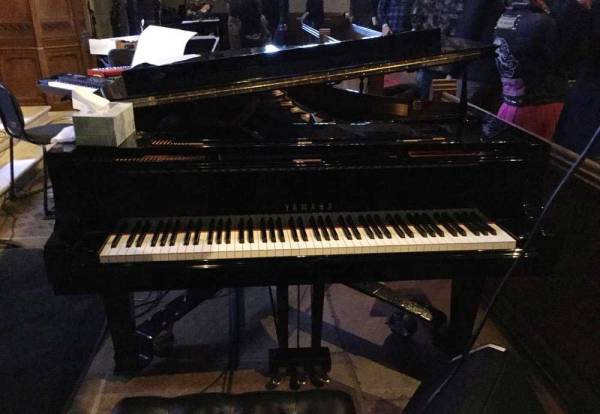 We finally got in and selected a place about halfway back from the stage, even though we were close to the front of the general admission line. There were that many premier and VIP holders queuing ahead of us. This was the only concert of the three that Budd would be playing piano in. The rest of the music was down to Knoxville’s nief-norf, a Knoxville experimental new music collective, and harpist Mary Lattimore. The concert today was a premiere of new work by Budd and it was exquisite. 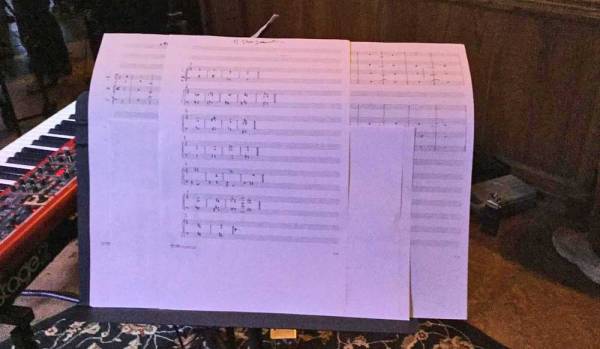 Budd’s score of the new music played this day

Budd has of course pared down his work to the bare minimum of notes necessary to convey the almost heartbreaking beauty of his music with the utmost in efficacy. As the concert began the juxtaposition of his piano and a single chord on the vibes was making me misty-eyed.  The acoustics of the space were well considered and it sounded marvelous.  Can you imagine how lustrous the music of Budd would sound with a harpist playing along? It was that exquisite. I could not help but notice that it was a very different sound to the previous Budd concert we had seen at Moogfest in 2012, where he played with a double bassist. But apart from the gong player who began this show [as had happened also in 2012], I would eventually discover that no two Budd concerts are alike!

Absint did not make the heart grow fonder…

We left the Budd concert at 4:30 p.m. and it was time for dinner. We found the nearby falafel restaurant and had what was the most mediocre falafel I’ve eaten and had two and a half hours before the next show we’d try to take in; Absînt in The Standard – on the north side of town. This quartet had some promise. The room adjacent to The Standard’s stahe room provided a clean sofa to rest on as we discussed the day. We’d missed the duo performance of Bill Frisell on Thursday in order to see the ballet. His tone sounded wonderful, so this was another chance to see Frisell play. The new combo also sported Aurora Nealand, Tim Berne on sax, and David Torn on 2nd guitar. I had seen Torn in a house concert that had done nothing for me in 2017, but his playing on Sylvian, Bowie, and Karn albums was excellent, so maybe he needed to be in a group setting to work for me. Their show began on time and I say that only in the literal sense of the word. What it delivered was four individuals playing as if in a void with absolutely nothing gelling. Berne’s sax provided any melody but it was at odds with the noodling coming from the others. Ms. Nealand was sitting on the floor playing with a box of chains. After about 90 seconds we left. Gladly.

Please remind me never to see David Torn play live again, no mater how much I like some of his performances.

Since the Mill + Mine on the same side of town as The Standard, it was an easy walk. We got to the large venue and had no problems getting in as the doors opened at 8:00. We got places about halfway back. Maybe a little better. The band were on the stage at 8:30 sharp and as the show began, I was hopeful that we might see a show this evening but after a false start that was delicate and tentative, the sound erupted and we quickly exited the venue. My wife conceded that she might enjoy them on disc but the volume levels were too much. We left the festival since there was nothing else of interest for us. We had been interested in Tashi Dorji and Tyler Damon,  but there was no way we were going to The Pilot Light again.

Next: …The First Revelation Of Big Ears 2019