In the last obituary here, regarding Mark Hollis, I invoked Scott Walker just three weeks ago when using him in a comparison of artistic temperament to Hollis. Just last night, around midnight, my friend JT emailed me the news while I was asleep. I saw it first thing this morning. The difference between Walker and Hollis is that while Walker was capable of a decade or more of silence between projects, he did not ever fully retreat from producing his art as Hollis did. Both were uncompromising in their pursuit of it. 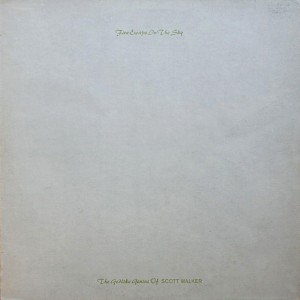 Being an American of a certain age, the music of both Scott Walker and the Walker Brothers were unknown to me until 1981, when Julian Cope curated the compilation “Fire Escape In The Sky: The Godlike Genius Of Scott Walker.” A title like that certainly grabbed one’s attention! That record emerged at a time when Scott had been resonating with a new generation of British performers ready for the combination of his sweeping baritone and his adult take on richly orchestrated pop music. He had been the voice of the Walker Brothers, but I had never heard them in America. Instead, the pop combo were the expat toast of England in the Swinging Sixties. Not America. Their Spector-like takes on the Bacharach songbook had made them superstars in England, but I never heard the tunes at the same time on US pop radio as I would have of, The Four Seasons, for example.

I had read a review of the Cope compilation in Trouser Press at the time, but never saw the album in stores. It had too low a profile. At best, I recall someone talking about the album in Vinyl Fever during my first trip there in 1985 and I could discuss the gist of it with the fellow shopper, but that was it. I did not hear any music of Scott Walker until David Bowie recorded cover version on his 1993 “Black Tie, White Noise” album. The song “Nite Flights” was amazing; by far the best thing on the album, and yet it was a cover version of a song by a guy named Engels, according to the credits. It was not until I got the laserdisc of “Black Tie, White Noise” that helpfully had Bowie discussing the genesis of the songs he had sung on the album that I realized that this was Scott Walker. And yet, the material was awfully scarce on the ground. CDs of the “Nite Flights” album didn’t exist. And LPs were simply not in Florida where I lived.

It remained until 1998 until I actually heard the music of Walker with “Boychild: The Best of 1967-1970,” another compilation drawn from his seminal first four solo albums. By the mid 90s I had begun to read many references to Walker in music writing. He seemed to be an éminence gris that had influenced most of my favorite artists. Bowie. Ferry. Big players. He was the meta-influence behind most of my already meta-influential artists. I had read many references to him in things like Q Magazine that I had actually been reading in the early 90s. I began to get curious, and it was during a road trip from Cleveland to Chicago to see Kraftwerk with a friend of a friend, that I got roped into a conversation with the gent I was riding with about Scott Walker. He did me an extreme service when after we had seen Kraftwerk with commenter JT. He took the step of sending me the “Boychild” compilation CD as seen above. That changed everything. The coin dropped and I worked my way back through solo albums Scott I-4 as I appreciated the explorations of a man obviously influenced by Jacques Brel and driven to explore an Anglicized approach to that kind of vivid guttersnipe chanson. No wonder they got Marc Almond to write the liner notes! 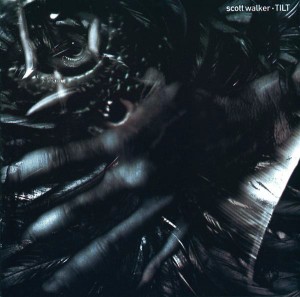 But by 1998, Walker had already broken the 12 year silence that had remained in the gulf between his only 80s album, “Climate Of Hunter,” and “Tilt,” his return to music from 1995. But “Tilt” was still a rare bird where I traveled. I kept an eye out and finally found the 1997 US edition on Drag City when in Atlanta in… was it 1999 when we saw Link Wray? Possibly. At any rate the sounds that awaited my ears on that one were nothing short of an existential deep space probe into the heart of darkness surrounding the horror of the human condition. The juxtaposition of abrasive blocks of orchestral sound and unresolved chords with Walker avoiding his patented baritone entirely for a strangulated, deliberately thin vocal that reflected the emotional and intellectual contents of the songs.