REDUX: New Wave Comps: We Do ‘Em Our Way 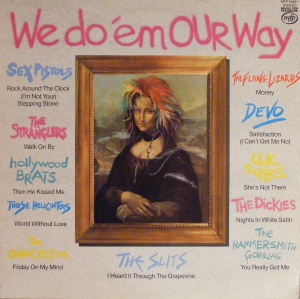 We hinted about this record in the comments on the last post. This was one of those “cheap, nasty” MFP compilations that commenter Nick alluded to on the last post. This was an album that I bought in a Camelot Music store during a rare 1981 visit to the glittering [now long razed to the ground] the Winter Park Mall. I had a few dollars in my pocket and took the initiative to see if there were any albums on sale there that might be a good fit with the burgeoning Record Cell. This one looked nasty, but was the right price: $3.99. Not bad for an import pressing dated the previous year. I had the DEVO debut album at this time, but none of the other tracks on this release were in my collection…yet. So it was a no-brainer.

The first track was an awful cut from the “Rock + Roll Swindle” OST with Eddie Tudorpole standing in for the departed John Lydon. That the remaining Pistols slogged along a path of severely diminishing returns as engineered by Malcolm McLaren for a period after Lydon leaving the band is a sordid tale, indeed. Eddie Tudorpole’s sub-moronic delivery of the rock and roll classic was insult to injury. DEVO‘s deconstruction of “Satisfaction” raised the bar considerably following this debacle.

The Golant Pistons, actually appear only on this single release! Their cover of “Friday On My Mind” exists nowhere else. The band were actually the “house band” of Sawmill Studios, but they do the Easybeats classic no favors here; opting instead for a dubious merits of a Judas Priest-lite, pseudo metal approach that really points out how the distance between punk and metal, even in the late 70s, was perilously close on the face of it, with only the band’s heads making the crucial difference.

The real Sex Pistols mark their return to this album with a much more superior recording track included on the “Swindle” soundtrack. Their take on Boyce + Hart’s sneering proto-punk Monkees classic is flat out excellent! The song’s sinister chord sequence made another appearance in The Dead Kennedy’s masterpiece “Holiday In Cambodia” proving that bad attitude can have a supremely long reach in rock.

Those Helicopters, released only three singles, but their extremely Cockney take on “World Without Love” was actually a B-side to their debut single. The end result is practically punk-by-numbers, but the version is brief enough not to overstay its welcome. Hollywood Brats had a fascinating history. The Norwegian glam-rockers formed their band as Andrew Matheson and the Brats in 1971 and disbanded in 1974, with their sole album, “Grown Up Wrong” getting a posthumous release in Norway only in 1975; selling only a handful of copies. Then the story gets interesting! In 1979, Cherry Red reissued the album as “Hollywood Brats” where it presumably sold somewhat better. Their non-gender switched cover of “And Then He Kissed Me” doesn’t do anything that Bryan Ferry didn’t do first and better with his cover of “It’s My Party” a few years earlier. They could have shaved off a few repeated verses, while they were at it.

The Flying Lizards dub-deconstruction of Money” had already attained classic status by the time this record had been released, but its inclusion here was certainly a draw for me in 1981, since I hadn’t gotten a copy of their debut album yet. In 1981 I was listening a lot to WPRK-FM and surprisingly, I was already conversant with The Slits brilliant cover of “I Heard It Through The Grapevine” from airplay there. This is probably my favorite Slits recording, ever! The production works even better for me than the Dennis Bovell work on their debut album. Ari Up’s vocal performance is intensely charismatic, as was Viv Albertine’s bone-dry guitar skank. The backing vocals are almost subliminal, but they effectively carry this song forward from start to finish. This was an all-time favorite New Wave coverer of mine and time has in no way diminished it’s appeal to me.

It’s a mark of this album’s class that it managed to include the full length, nearly seven minute version of The Stranglers’ cover of “Walk On By.” Better to let Dave Greenfield work out his Ray Manzarek fantasies. Of course, in J.J. Burnel, The Stranglers had something The Doors could never touch; a bass guitar! Next up was another weird time-travel cut from 1974. The Hammersmith Gorillas offered a proto-punk version of the Kinks classic festooned with incongruous pumping Mott The Hoople piano. Pretty faceless, otherwise.

The U.K. Subs fared better with a cool version of a cool Zombies song. It dared to step away from punk orthodoxy to try something a bit more challenging than cod-metal with a Cockney lead vocal. And finally, The Dickies wrap this up with the stellar cover of “Nights In White Satin” discussed here. This was a compelling purchase in 1981, with only one track already on the racks. In 2014 it becomes a whole different ball of wax with much of the high points of this collection on shiny, silvery discs. The two cuts that ensure I keep this record are the brilliant “Stepping Stone” and “I Heard It Through The Grapevine” covers. Since I opted for the first CD issue of “Cut,” my copy does not have any of the bonus tracks of the 2000 DLX RM. While I may upgrade my copy of the Slits album, the one track here I’ll probably keep this for is “Stepping Stone” since the odds of buying a copy of “The Great Rock + Roll Swindle” are about nil. It’s to my eternal detriment that I ever watched the train wreck and the embarrassments on the OST ensure I will never buy it.

graphic design | software UI design | remastering vinyl • record collector • satire • non-fiction
View all posts by postpunkmonk →
This entry was posted in Blast From The Past, New Wave Compilations and tagged 1980, New Wave Cover Version, We Do Em Our Way. Bookmark the permalink.

6 Responses to REDUX: New Wave Comps: We Do ‘Em Our Way