REDUX: A Young Person’s Guide To: No Wave

There also existed a US picture disc LP of this same title! I’m certain that chasinvictoria must have one of these in storage as well. The album featured the same, delightful cover art on the A-side, but the B-side was completely out to lunch.

I want an anchovy to go… and hold the pizza!

Almost literally since the album was not titled “No Wave… To Go! Why Pizza? Well, it was round. The PicDisc version was a numbered edition [probably less than 5K, I’m guessing] and it came in the requisite clear PVC sleeve that such editions sported. For that reason, the credits were appended to the B-side of the sleeve on a sticker. The A-side featured a cheap come-on and both of these are reproduced below. 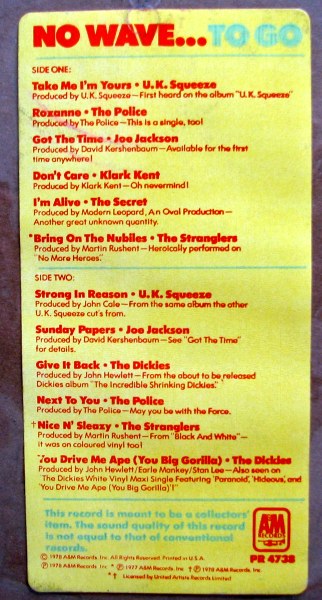 Seeing that tells us that Joe Jackson was not yet assaulting the pop charts since this album featured two pre-release cuts from “Look Sharp” which had yet to be released according to this test pressing dated December 5, 1978. So wow, this was not a case of putting a breakout artist on this sampler as Jackson had yet to hit the bins, much less wrangle his way onto the FM Rock airwaves.

If you clicked the link yesterday for Ron Moss, the A+R coordinator of this album, he told an informative tale on his LinkedIn page. He gives credit where credit is due, citing Derek Green, the man who ran A+M’s UK division [and famously signed the Sex Pistols]. So this was a case of a mentor influencing Moss, and this tells us that Derek Green was probably the man at A+M who we can thank for all of the unusual signings that they brought to American record stores.

But this record didn’t just appear in American record stores! There also exists a Canadian version of this album which looks like this: 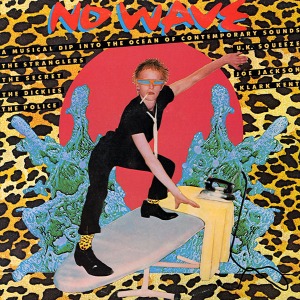 …but two of these things are not like the other. Did you spot the difference? Some Canadian A+M employee probably blanched when playing the test pressing of this puppy and changes were made, no matter what the cover said! The cover touts The Stranglers, but one David Kubinec found two tracks produced by A+M staff producer John Cale from his 1978 album “Somethings Never Change”in the place of “Bring On The Nubiles” and even “Nice + Sleazy!” I’m all but certain that chasinvictoria probably has one of these in his home, so perhaps he can tell us more.

Back In The UK

Yesterday, commenter Nick brought to my attention the heretofore unknown fact that there is also a UK edition of this album and it is so different as to be practically another release entirely… which is why it is not linked in the Discogs.com database with the North American edition in any way. Discogs are funny about that sort of thing. Same label,. Same title. Half of the same tracks… nope. It’s a stand-alone release with its own deep entry in their database. And deep is it because this album came in a bewildering array of colored vinyl options and a drastically different cover as evidenced below.

This puppy came in four different colors: opalescent, purple, orange, and blue. It featured four more cuts, with no Stranglers in evidence, since they were signed to UA in their native land. Once again, David Kubinec figures again in the mix, and The Secret get two cuts here. The one gem for my eyes is the Klark Kent B-side, “Office Talk.” Then there are two cuts from the Oval/A+M Records label that I had never heard of before.

Shrink released a titular 10″ EP but the “Valid Or Void” track same from a non-LP single. It’s hard to tell from the cover art, but the enigmatic Shrink had the whiff of glam too far past its sell-by date shoe-horned into New Wave, until the back cover makes this [and Shrink’s desperate half-shaved hairstyle] most explicit. 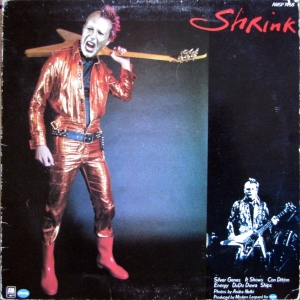 Another Oval artist I’ve never heard of was Bobby Henry, who looked a little out of place, situated next to the outré Mr. Shrink. But the sleeve had at least one link to New Wave greatness: Oval friendly Lene Lovich was credited for the sweater Henry is wearing on the cover.

Now I need to ask chasinvictoria is he has one of these UK LPs, since his “No Wave” collection is incomplete without it! The unimaginative cover has nothing on the exquisite North American sleeve by art director Chuck Beeson, who looked like he had a lot of frustration to work out from all of those Styx and Pablo Cruise sleeves that he had to chew on in the 70s.

7 Responses to REDUX: A Young Person’s Guide To: No Wave