This week is only the second time I’ve attended a full festival. Usually we lick the one day when we have to attend and that’s it, but this year Big Ears has a Harold Budd residency, so all that went out the window. And we’re fine with that! We had seen Budd at Moogfest 2012. We had planned on seeing him at Big Ears 2014, but he fell and broke a rib days before the event. This time it’s hours of Harold Budd playing both solo and with varied accompaniment. Budd is 82 and picks his concert events carefully. We respond accordingly. So there is four days of music and art waiting for us. What tickles our fancy?

Fascinating. Tim Story has taken hours of Roedelius piano improvs he had recorded and has crafted a sonic collage of the notes, splayed across an 8-channel environment. The result is a sonically immersive pool that runs for hours a day that anyone can dip into for something beautiful in their day. More on Tim Story later.

This British filmmaker has  created films focusing on her interest in experimental music from Stockhausen to Cardew. This is her first large program of her work in the United States and will include a showing of “I Hope I’m Loud When I’m Dead,” which was conceived following the last US Presidential election. Sounds lovely.

I was not intimately familiar with Bill Frisell [and should have been], but my wife has been digging into the lineup and Frisell clearly came up a winner with his guitar playing with Ryuichi Sakamoto and David Sylvian being safely ensconced within the Record Cell! His tone is immaculate, and he will be paired on Thursday with double bassist Thomas Morgan.

This is an audacious new ballet based on poet Caroline Randall Williams collection called Lucy Negro, Redux. An imagining of Shakespeare’s “dark lady” as an African woman. Live score by Rhiannon Giddens and pianist and percussionist Francesco Turrisi. The original poetry will be incorporated into the performance. How many other music festivals also feature a ballet?

Something different here with Steve Poulton giving his sophisticated take on the kind of white soul that once flowed from the pen of artists like Boz Scaggs but has been relatively scarce in the world of the now. Having heard this man, yeah, Boz Scaggs was the immediate comparison that sprang to mind.

I swear I’ve heard the name Mercury Rev for decades, but I never brushed against anything more than the name in passing. Having sampled the band they have now found a late night berth on our festival schedule. The closest thing to rock on this first day of the festival.

An electroacoustic trio with Ian Chang and Jackson Hill. The combo have a full multimedia component to accompany their fractured, but nor, discordant jazz. Elements of techno juxtaposed with lyrical blues guitar. Should be interesting. 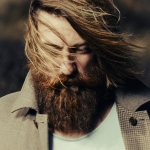 This classical pianist has a strong line in Erik Satie-esque piano explorations which are the kind of things that have great currency with my ears. He will be playing on two days of the festival so we may partake both of his performances. He sounds marvelous.

Another Cal Arts alumnus like Harold Budd, Stone studied under Morton Subotnick and had been performing computer music live since the early 70s. His compositions are less serial than Subotnick’s; favoring a modern jazz element to my ears. 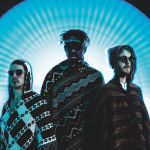 The Comet Is Coming

Hard-edged industrial funk-jazz? What I heard has lashings of the Material approach of Bill Laswell running through its DNA. My wife was not convinced, but I take to this sort of thing like a duck to water, so we may part for this show… 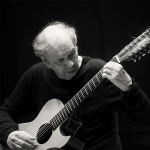 …If only I can tear myself away from the notion of hearing the acoustic jazz guitar of Ralph Towner! The 5-7 p.m. timeframe of the Friday schedule is rife with things worth hearing! Hard decisions will have to be made during this period. Because we also have…

…This gentleman playing everything but the kitchen sink [and maybe even that] as he voraciously explores the percussive potential of everything under the sun in his pursuit of rhythm.

Bleckmann’s Post-Modern take on vocal jazz even includes a Kate Bush cover album in his canon. His abstract take on jazz singing has more in common with Fripp’s guitar soundscapes than anything we might have heard before. Color me intrigued. But happening at the same time are also…

The world premiere of a new combo that Aurora Nealand has built around herself with Tim Berne, Bill Frisell, and David Torn along for the ride. The jazz artist has some heavy hitting company and when Sylvian vets such as Frisell and Torn are playing guitars, I might want to be there. 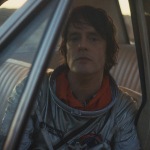 Another act to sit in the same box with Mercury Rev. They have been around forever without troubling my ears, but when I sampled the wares, it was not off putting, so they’re on the list. Goodness knows I’ve seen their elaborately packaged releases forever and a day.

Phew! out of room! This multimedia performance will feature Roomful Of teeth singing and the photography of Robert Mapplethorpe.

Improvisational guitar and drum due with guitarist Dorji having moved from Bhutan to Asheville, where he attended college at Warren Wilson, so technically, a local act! We used to live near Warren Wilson when we first moved to Asheville.

And that’s an action packed Thursday and Friday with more to come tomorrow as we count down the hours.

Next: …Waiting For The Weekend