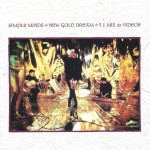 The final disc was a revisit of the DVD-A that came out in 2005. I was lucky enough to have gotten a copy back then even though 5.1 surround sound was still six years into my future at that point. The album as heard here used the longer edits and had a few alternate takes with Ronald Prent having mixed the masters into 5.1. With the exception of “Colours Fly + Catherine Wheel” and “Promised You A Miracle,” where the multitrack masters were lost so no 5.1 for those.

I enjoyed hearing an absolute favorite album in 5.1 back in the day, but I maybe listened to it twice while sitting in the “sweet spot” required for 5.1 since that’s so how I don’t roll. But my old DVD player was DTS compatible. The 2005 DVD-A was 24/96/5.1 in DTS DVD players and on the briefly available DVD-A players that were available for a year or three back then in the cold, cruel format wars. The sad thing for me was that the old DVD player stopped working so I got a new player and it was no longer DTS compatible. It only supported 5.1 on AC-3/Dolby Digital format, which is compressed audio that tops out at a 48 KHz rate. I could only listen to the audio in 24/96 LPCM 2.0.

Prent’s 5.1 master was repurposed for this box set on disc six and the story was happier this time. This disc supported:

So the dedicated DVD-A players [all 327 of them…] lost out, but everyone else with just AC-3 DVD players won in this scenario. I can once again hear the sounds of this album in a 5.1 mix. As with the 2005 disc, the music videos for “Promised You A Miracle” and “Glittering Prize” were added on. The band discography on the 2005 DVD-A was missing [no loss, that] but instead this new DVD had the Top Of The Pops appearances of the band for both of those singles. One could gasp in awe at the fashion sense of the young Kerr with a penchant for both white pants and black boots [striking, but odd] as well as a troubling line in metallic black ascots [a fatal fashion flaw]. Both outfits were the sort of thing he dared only to try in his Kohl eyeliner days. The drummer for those TOTP sessions was still Mike Ogletree who had his brief moment in the sun at just this instant.

This DVD disc remains the finishing cherry atop a luxurious sonic sundae® of decadent proportions. It really made sense for “New Gold Dream” to get the sort of super deluxe workout that challenged its most ardent fans [raises hand] to eat it all in one sitting. Well, this has been the crux of my listening for several weeks now and I’ m quite happy to have spent the $49 [used] to have bought this before it slipped out of my fiscal reach for good.

Yes, some aspects of it are gilding the lily, but better to have too much than not enough of this album. While I still can’t hear the difference between “New Gold Dream [81, 82, 83, 84] German 12″ remix” and “New Gold Dream [81, 82, 83, 84] German 12″ remix with drums” I stand by their decision to go there. The main album is an unassailable classic. Disc two features every conceivable 12″ version; including some I hadn’t a clue about. Okay, so the third disc is a formality. The 7″ mixes were needed to fill out the trio of B-sides. They could have put these on the album, but when going super deluxe, it’s fine to keep the album intact as released.

The fourth disc [radio sessions], was worth the cost of entry to me. Now I could have my fulfillment of hearing more of Kenny Hyslop and Mike Ogletree behind the drums with the band, who were peaking just then. The bonus of the all time best recording of “Promised You A Miracle” [sometimes the first cut is the deepest] was icing on the cake. Also, hearing the NGD era band tackling the immediate past with “Sons + Fascination” material was surprising.

The alternate version of the album on disc five was the answer for my desire to hear more instrumental takes of these songs. One of my fondest projects, one that I’ve done whenever I could actually do this, is to compile an alternate version of a favorite album with completely different versions or mixes. In fact, my friend JT did this ages ago for Duran Duran’s “Rio.” You kids with your playlists probably do this all the time now, in the modern age [gestures vaguely with a hand flutter]. While we don’t get the Full Monty in instrumental, I can only say that the sumptuous “Colours Fly + Catherine Wheel” never sounded better than without Kerr distracting from the bass playing. Along with disc four, disc five was well worth moving beyond the 2xCD version that was just the album and disc two of this set. The glory of this box is that the deeper one sinks, the harder it is to get up out of the pool of rapturous sound that seeks to pull you under every time you succumb to its manifold charms.