Posted on February 8, 2019 by postpunkmonk

I can recall the early 90s when the first New Wave Comps began to manifest. The first batches came from Oglio with their Richard Blade curated series and from Rhino with the “Just Can’t Get Enough” series. The latter was an especially far-reaching program with 15 volumes and four themed supplements between ’94-’98. At the time, I didn’t fall too hard for these, but I can remember chasinvictoris, then in the throes of his “Chas’ Crusty Old Wave” radio show, hitting this action but hard. Just one of these volumes could sate a dozen requests. Me? I already had the original albums of most of the songs on these volumes. Either that, or I planned on buying them. But volume 7 was Monk bail, largely for the appearance of the rarely anthologized Fashiøn single “Love Shadow.”

Yes, there was a time where I would buy a CD just to hear one song on the shiny silver disc. But even though I eventually got the “Height Of Fashiøn” CD years later, this CD was worth hanging onto. I’ve been recently revisiting it and it was an exceptionally well curated  disc of material. It’s very scanty on the over-anthologized New Wave songs we’ve heard too many times already. The closest thing to that here might be the Haircut 100 song, and really, “Love Plus One” would better fit that profile! “Favourite Shirts” hewed much closer to the post-New Romantic vogue for latin funk ala Kid Creole than the Culture Club-esque pop that they had a bigger profile in America with. 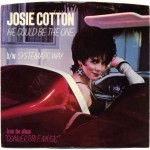 We’ve all heard “Johnny Are You Queer” a few too many times, so it was nice to hear a different girl group New Wave cut from Josie Cotton. Her fun throwback sound was better served by something a little less crass. I recall when The Blasters emerged in late 70s L.A. scene with their greasy take on R+B/rockabilly. I had always planned on getting their slash debut album but until then, there’s “I’m Shakin’.”

Paul Carrack had an interesting career that first saw him fronting Ace whose late 70s hit was “How Long.” I next noticed him as a keyboard player on Roxy Music’s “Manifesto” and “Flesh + Blood.” He made a successful solo turn in 1982 with “I Need You> as included here. It’s a good blue-eyed soul record. I once bought the full “Suburban Voodoo” CD but found that it was not as succinct as the pleasures in this single.

I have the 1982 12″ of Animal Nightlife’s “Love Is The Great Pretender” but the  version here was a re-record from their album in 1985. A far slicker, and bloodless version of the campy song. Too bad that the ’82 version was not here instead, but the fact that Rhino picked this song that never got a US release for this anthology shows class.

I have never been a fan of L.A’s X, owing to the tuneless wailing of Exene Cervenka, so “Blue Spark” was a revelation! The riff rocker sported John Doe lead vox and Exene actually harmonized with Doe for a change. I didn’t think she was capable. Billy Zoom’s high pressure guitar riff hook needed no apologies.

The one song here I have to hit the skip button on is probably the biggest hit here: Musical Youth’s “Pass The Dutchie.” Not my cuppa. Not by a long shot. Bad Manners was always a ska band that I never paid too much at the time, but their cover of “Samson + Delilah” was a more acceptable form of cod-reggae than the preceding song. 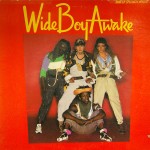 Wide Boy Awake was the band fronted by Kevin Mooney ex-Adam + The Ants. “Chicken Outlaw” was like a more listenable version of what Haysi Fantayzee were trying to do [and what ultimately Malcolm McLaren did first and best]. The full 12″ version was used here, and I’m thinking that maybe the succinct 3:05 7″ mix might have worked a little better for me. This was the second longest song here and it showed.

Trio’s great “Da Da Da I Don’t Love You You Don’t Love Me Aha Aha Aha” is one of those songs that I never tire of. Its deadpan minimalism always manages to put me in a good mood. It;s probably the second most anthologized song here, but every home needs at least one copy. The fantastic cheesy Farfisa-driven New Wave classic that was “PArty Weekend” by Joe “King” Carrasco + The Crowns is a must. I sing this one all of the time and one of these days, I need to remaster the first three albums, which sit [this one in multiple copies!] in my Record Cell! MCA just put out a three-in-one best of for this period and I want the whole enchilada. I truly loved the one Joe King show that I caught at The Junkyard in Maitland back in ’93/’94. The man is a non-stop energizer bunny of Tex-Mex party rock!

“Love Shadow” was the reason why I bought this CD so, ’nuff said! I have used a fair number of electrons outlining my devotion to this band at this time with the sterling production of Zeus B. Held. As we have also recently gushed over Bill Nelson’s frenzied e-bow workout, “Flaming Desire.” Then the program came to a stunning conclusion with Laurie Anderson’s “O Superman [For Massenet].” Including this song which stood apart of everything else in the 1981 firmament spoke highly about the high caliber of the curation of this series.

By the mid 90s, New Wave Comps were a dime a dozen, yet this volume was so fresh at capturing an expansive slice of the dozens of styles that sat under the New Wave umbrella. The selection of songs here is second to none at avoiding New Wave cliché and it sidestepped all of the songs that I can go the rest of my life without hearing again, and yet it’s strongest virtue is how it captured music from that era that was not synth pop! Too often, the whole New Wave = Synth pop trope that clings to the neck of New Wave like a resilient albatross threatens to recast the actually more diverse history of the movement in our rear-view mirror. I’m pleased that compilers David McLees and Andrew Sandoval took the high road when putting this volume together.