Posted on February 4, 2019 by postpunkmonk

The band’s 1989 album showed them clearly aiming for the emergent VH-1 aesthetic. Not the worst thing in the world they could be doing! This was better than faux Stax soul music, but only just following the vibrant “Savage.” One single stood out as being particularly good. “Don’t Ask Me Why” was slick, smooth, and elegant – but it wove a reasonably captivating spell.  Other songs ran a course pointing perhaps to the “Revenge” sound with a lusher production. “[My My] Baby’s Gonna Cry” had a familiar chug to it. There was a great promo CD with a good Duncan Bridgeman remix, but that didn’t reach many ears! It was a passable Eurythmics album but nothing to inspire the old fervor.

Given the artistic cul-de-sac that Eurythmics had evolved into, the tabling of that band and the emergence of Annie Lennox and Dave Stewart as solo artists was not surprising. What was surprising was that Dave Stewart beat Lennox to the market by two years! I picked up his first single and that was that. Nothing I can remember looking at the cover now [the disc is long gone from the Record Cell].

It fell to Ms. Lennox to make a more substantial offering. I remember jumping on the “Why” single immediately in all configurations, but at first blush, it was very underwhelming to me. I sat on it for a few weeks then found myself touring through Eastern Canada and everywhere I went “Why” was in the air. And the constant exposure gave me a better perspective on her performance than I was willing to give it at first. The soft ballad revealed a cold as ice heart with a knife stuck deep into it as Lennox’s performance made it rise above the almost lullabye caliber music bed. Her whispered coda was utterly devastating. The rest of the album was diverse and engaging with a mixture of ballads and dance material, and her co-writing songs with The Blue Nile certainly showed where she was aiming – and hitting the target. I was spellbound by “Diva.” If Eurythmics had been laid to rest for this, I was more than fine with the results. I bought all of the singles and the inevitable laserdisc, and was ready to continue my Annie Lennox fandom.

But that didn’t happen. Three years later she issued “Medusa;” yet another of the 90s predilection for cover albums. At the time, I was still buying cassette tapes, and ironically, Maxell tape had what was called “max points” that one could save up and get free CDs. I opted for “Medusa” and it was a good thing that I had not jumped on the bandwagon with my cash, because I was beyond appalled at what had been done to a handful of favorite songs and otherwise. “No More I Love You’s” had been turned into an oversung nursery rhyme. The vibe here was akin to a children’s music box of cloyingly sweet, one dimensional performances. Songs I had loved like “The Downtown Lights” and “Train In Vain” had been decimated with the liberal application of synthesized fondant icing. She managed to choke the very life from songs I had previously loved… to say nothing of those I didn’t care for. No matter how awful 90s cover albums got [and they were very bad indeed…], they never managed to snatch the trophy for “very worst” from Lennox’s grasp for this turkey.

I was surprised that Eurythmics reconvened in 1999 for the album “Peace” with a tour benefitting Greenpeace and Amnesty International, but at least the charity angle justified the expenditure. The album was another MOR excursion without the benefit of at least the few good songs they managed to write the last time out. Not as fraudulent as “Be Yourself Tonight,” it was still a missable Eurythmics album.

It was another four years later when Ms. Lennox continued with her solo career. I was gun shy by 2003. I did not buy a copy of “Bare,” but I didn’t need to. My good friend Mr. Ware had been given a copy and it did nothing for him, so he passed it onto me. Not a sterling endorsement by any stretch of the imagination. I gave it one play and it was more musical helium. Soft airbrush synths of little weight given to ballads that made no impact what so ever. Actually the cover was the most interesting thing about the album! No, scratch that. Her liner notes on the back cover were much more interesting than the music on the disc.

It seemed like much more thought went into the cover to these ears. After maybe two plays, I got rid of the CD. That says everything. The last two Annie Lennox solo albums I had gotten for free and they still weren’t worth owning! Thinking back to 1979 this would have seemed unthinkable to my teenaged ears when fervor for Ms. Lennox knew no bounds.

So that’s my story. I have not heard a note Lennox has recorded since 2003. I see no reason to tempt fate. I note that Lennox had worked with keyboardist Pete Vetesse [who had done few favors for Simple Minds either, now that I think about it…] on the period of her solo career that I’d heard and his predilection for soft, airy synths and tension-free sound design and arrangements worked against me in everything but the “Diva” album. That one, for some, miraculous, reason, had the artistic goods for me. Not that Lennox has been burning the studio up in the intervening years. She has released only three album in the period between 2003 and 2019, and two of them are cover albums! One of them looks like this…! 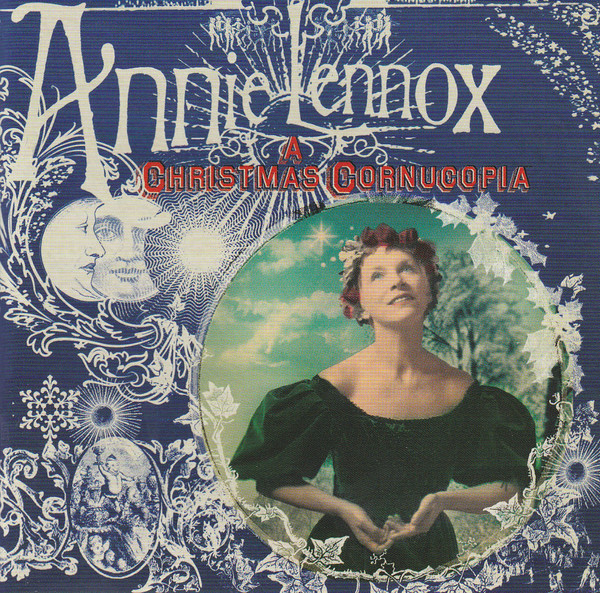 Irony free? – you be the judge

I once went to annielennox.com in the last ten years out of morbid curiosity and the design of the website looked like a Thomas Kinkade nightmare. With three cover albums among a series of six solo albums in a stately 27 year solo career arc, it seems like Ms. Lennox has little to offer us. Having read Lucy O’Brien’s bio of Annie in 1991, I get the impression that Ms. Lennox is a troubled soul. Her marriages point to something unresolved within her. I think when she attempted to write from a facile, non-personal point of view, the results are missable in the extreme. As “Be Yourself Tonight” showed. By the same token, is it asking too much of an artist to hold them to unleashing songs the emotional caliber of “Why?” I’m guessing that’s why she leans so heavily on covers in her solo career.

With Dave Stewart by her side, at least she had a consistent writing partner capable of traveling all over the musical map [whether it was a good idea or not]. Still, the notion of working professionally with your ex-boyfriend…for 20 years after you split up as a couple, could not have been easy on her. This is not helped by the fact that she’s one of those people who could “sing the phonebook.” The big danger of that is that she might as well be doing just that at the end of the day. With her voice, people would still listen and she’d be spared trading in any more of her pain. And I think we’d all be the poorer for it.