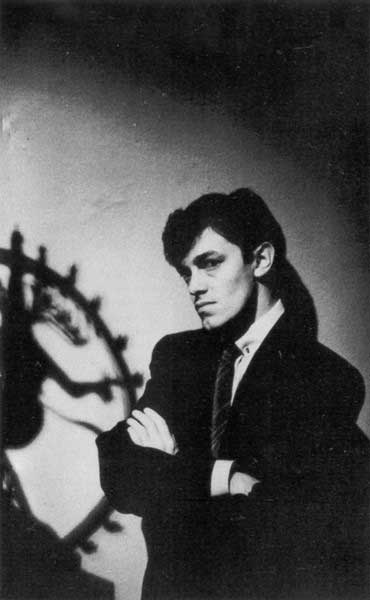 Two of the three B-sides from the “Eros Arriving” 2×7″ were next in the program. “Flesh” was the odd man out in this context, since the frenetic, angular New Wave clearly belonged to the previous two Nelson albums: “Sound On Sound” and “Quit Dreaming + Get On The Beam.” The brash sound used kitsch lyrics pulled from the poster of “I Was A Teenaged Frankenstein.” Bodgan Wiczling of Fingerprintz drummed and brother Ian Nelson contributed the squealing sax runs. This one must have been among the earliest recordings made during this period as it could have fit nicely on “Quit Dreaming And Get On The Beam.” It’s the one track that seemed to be out of place here.

The next song was quite another kettle of fish. “He And Sleep Were Brothers” has always been a world class Nelson B-side for me. The deliberate, methodical drumbeat from Mark Radcliffe pulls me into this song every time I hear it without fail. Nelson sings his lyrics in a hypnotic melody, with deliberate pacing and slurred noir sax from brother Ian. There are synth runs in what seem like Arabic scales coursing through the mix and Nelson adds a guitar solo of powerful, dynamic tone near the song’s coda, where a descending melody haunts the song to its end. Itself, would-be fuel for another, different, yet fantastic song.

Listening again it struck me why I loved that rhythm so much. It’s a very close cousin to the similarly epic beat that grounded Simple Minds stunning “Boys From Brazil.” Given that the latter appeared at roughly the same time in the marketplace as this album, I’d put it down to the zeitgeist, but if you want to sample what I mean, here are both drum patterns. The samples below will play more than enough of each.

BILL NELSON: He + Sleep Were Brothers:

Then the album continued with the immaculately titled “When Your Dream of Perfect Beauty Comes True.” This was another shorter piece, but not quite as short as some on this album. The 808 and the synths vie with the Nelson’s marimba to create a winsome Japanese sounding rondo that threatens to ignite into a miniature sun every time I hear this piece. It could have been another 2:08 ambient piece but I’m glad Nelson thought to let it run for 3:33. Once heard, it could run in my mind [taps cranium] all day.

Then the brilliant single “Flaming Desire” came and took virtually the same beat that “Empire Of the Senses” used to very different ends. Nelson’s guitar leads stung like barbed wire as the swooping, fluttering synths battled with them for dominance. This was probably Bill’s highest profile song in America, judging from yesterday’s comments, at least. I know that PVC Records [a JEM subsidiary] released a US EP of this that included the 6:22 long version and all of the five non-LP B-sides surrounding the two singles from this album. The 12″ version is the best because it unleashed the solo for almost another two minutes. Luxury, as ever, should not be moderated!

After this, the reflective “Portrait Of Jan With Flowers,” an ode to Nelson’s wife Jan Nelson followed. The pastoral mix of rhythm box and piano was delicate and understated as the previous song was not. Then it was time for a track which stood in between the short ambient songs int he program and the longer pop works. “The Crystal Escalator In The Palace Of God Department Store” featured dubbed rhythm box with freeform synth melodies that was held steady by Nelson’s up front bass lone.  Nelson’s lyrics here really were like a scattering of two, almost three, haiku. A final tiny instrumental “The Echo In Her Eyes,” was a delicate wisp of synths barely touched by brushed cymbals that almost served as an introduction for the concluding song.

“The October Man” was the sound of Nelson coming to grips with his guitar playing capabilities in an album where he continually sought to undercut his advantage on that particular playing field. The long 6:45 song had a continually evolving solo running through its entirety. It faded in on the solo, which was hanging a note and then it simply unfurled for another nearly seven minutes. The song faded out on it. Who knows how long Nelson was playing that solo, but he edited it to a length that never seemed excessive. His inventiveness in shaping his tone throughout was considerable. This was the only song on the album that had a human drummer, so it’s position at the end of the album was not a frivolous thing. It brought this excellent album to a close that suggested that this was only the tip of the iceberg from Nelson. In many ways it was.

By the next year, his personal label, Cocteau Records, would begin releasing many more recordings than his major label. Following 1986’s “Getting The Holy Ghost A Cross,” most further Nelson releases would be on his own power. And the power must have been prodigious, since he generated dozens of albums and boxed sets over the ensuring decades. After 1992’s “Blue Moons + Laughing Guitars” on Virgin, I was unable to keep up when his output crossed the line of one or two albums a year and began to be four or five a year. Now that he can release downloads, without the time and expense of manufacturing a CD, he has stepped up his game.

But even if he had never released an album past this one, I would remain holding a torch for the achievement of “The Love That Whirls.” In some ways, the drag of a major label might have helped to make him form what very well could have been two separate releases [ambient vs. pop] into a unified release that covered more ground and was capable of sustaining further, and more complex moods, into a satisfying whole. Nelson was soon making whole albums of brief instrumentals in the vein of those on this album, but without the context of juxtaposition as here with rock and pop songs amongst them, their impact and profile never rose so high in my esteem as they did here. And the placid interludes set apart the dynamic songs and kept them from being overbearing.

2 Responses to Record Review: Bill Nelson – The Love That Whirls [Diary of A Thinking Heart] [part 2]