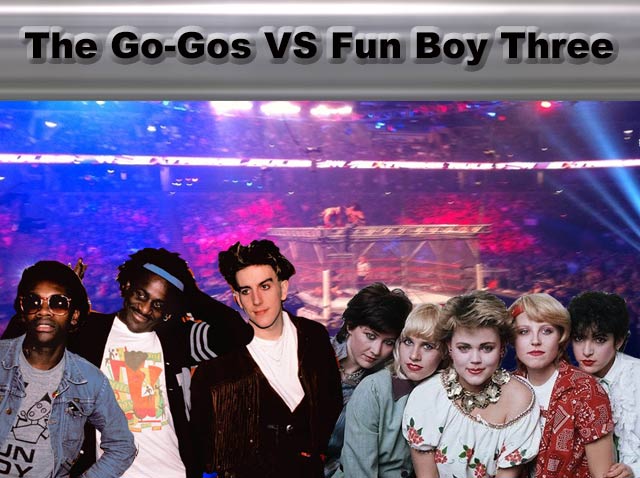 I recently bought a copy of the US 12″ single of the Fun Boy Three version of “Our Lips Are Sealed,” so now I could finally hear something more than memories for the first time in 35 years. I had never owned the song and it had been that song since I had seen the scant few showings of the music video for it on MTV. Of course, it was now time for another entry into the Steel Cage Match thread on this blog!

The first Go-Gos song that most people heard by the band was their first single after being signed to I.R.S. Records in 1981. Older fans may have heard the 1980 Stiff Records single of “We’ve Got The Beat,” but that was a UK import single. When I.R.S. released “Our Lips Are Sealed,” that song came out in June of 1981, taking all summer to creep into the US top 20 by the fall. The Go-Gos were… going places. The light, upbeat pop of the song made it a natural radio hit that actually fulfilled its destiny. How many times did it sound like a hit to me only to languish in obscurity?

The song led with the beat from drummer Gina Schock. Back then, Belinda Carlisle was not squeezing excessive vibrato into her singing, so her performance was breezy with Jane Weidlin’s lead on the middle eight being winsome and girlish. Charlotte Caffey added the synths with thin string washes to balance out her tremoloed guitar leads. It’s 2:45 of fresh-faced pop fun in spite of the song carrying its emotional heft from the very real backstage affair that tourmates Jane Weidlin and Terry Hall of The Specials experienced then they toured the US together in 1980. Thought the lyrics were undoubtedly drawn from their reality, the song was still a light piece of fluff in terms of arrangement and performance. Producer Richard Gottherer was hired to make ear candy that went down smoothly.

That was not necessarily so when Terry Hall returned the volley for the second [and final] Fun Boy Three album in 1983. First of all the song was produced by David Bryne, where it stood as the acme of his external production career, in my opinion. While the song still led with the drums, the arrangement and production was richly textured and warm; featuring layered conga percussion from Blue Rondo Ala Turk’s Geraldo D’Arbilly that formed a wall of sound with the drums that had the deep, chanted backing vocals forming a dense patina on top of them. Then the song’s had Nicky Holland’s arrangement, which had as it’s ace-in-the-hole Caroline Lavelle’s cello having the spotlight in the instrumental bed.

It sounded fantastic. A rich cocktail of dark-hued chamber pop with the cherry on top being the wonderful vocals from Terry Hall and June Miles-Kingston. Their harmonies were less strident than on the Go-Gos version. Hall, in particular sang with a clear, almost androgynous tone that made for a nuanced take on the material. The defiant hurt embodied in the lyric manifested more acutely in his performance. At the end of the day there’s no contest as to which performance I prefer. In comparison, the Go-Gos version was like a neon colored comic book. The mystery was why did I wait 35 years to have this in the Record Cell??!