The cover looks urban futuristic, but looks are deceiving

I recently got wind of a new branch growing from the Heaven 17 tree and just remembered to investigate it. I heard about this a few months ago and discussed it with the H17 fans that I knew, and Berenice Scott has spent a lot of time playing with Glenn Gregory as a member of both Heaven 17 since 2011 and Holy Holy; Woody Woodmansy’s Bowiecentric band. Their new album as Afterhere was released a couple of months ago as a DL and now the actual CD dropped earlier this month. 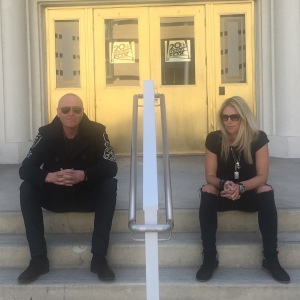 The duo had their origins in the soundtrack work that kept Gregory busy in all of his [sadly, considerable] H17 downtime. Gregory and his long term soundtrack partner reached the end of the line after years of working together and Glenn found himself working far too many hours at his various recent commissions solo for his taste, so with years of working with Ms. Scott under his belt, he thought it would be a natural progression to take her on as a writing partner since they were already in two bands together. He knew that they could get along well under fire, with various touring commitments having made a strong foundation for their partnership.

They did a few jobs scoring together and the notion of writing songs together came up naturally. Ms. Scott already had a solo career with a few albums out over the last dozen or so years. Having grown up with Robin “M” Scott as her father, she got classical training as a young girl, so she brought serious musicianship to the task. After they had began writing songs they finally coined the name Afterhere as the group’s identifier. Berenice drifted into the singing role so Gregory could step aside form the mic for a change. How does it sound?

Hmmm. Very different from what we get from Heaven 17. The clip for “Addict” had a pop-centric thrust with a touch of dark electronic ambience, but it seemed closer to my idea of whatever constitutes the mainstream these days than the sort of material that I turn to H17 for. The personal/relationship lyric was also less than catnip for me. If groups are going to sing about romantic fixation they had better bring their music/arrangement game to the table to maintain my interest. Your mileage may vary. After sampling the entire album, I was shocked to find that some of the songs even sat cheek-by-jowel with the sort of material that Scott has previously released solo, which sat firmly in the singer/songwriter mold. I was surprised to find that the whole thing was not compelling to my ears. The album had a cover of “All Along The Watchtower” which was released as a single [complete with non-LP B-side!] but stands as the least interesting version of that chestnut I’ve ever heard.

The group just performed their live debut on October 6th, so this will be a further example of Berenice and Glenn touring together if they have anything to say about it. I wish I could get more excited about it. Initially I had high hopes, but this one is not for me. It feels strange passing up a project that was formed by two members of Heaven 17 but I have to say that I could not hear a bit of that band in the results. This just seemed like typical pop music to me, but if it speaks to you, then by all means order here.