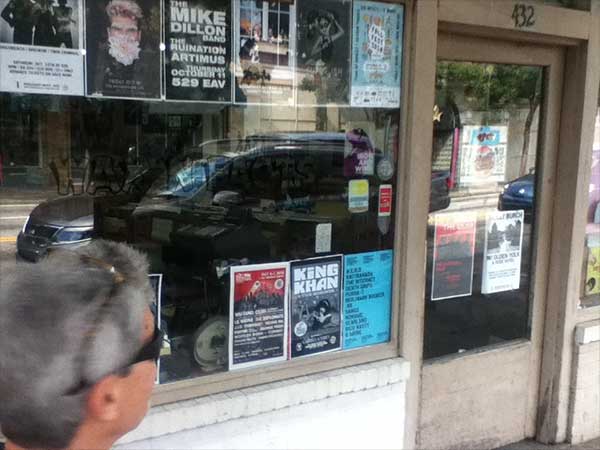 We strolled the 400 feet from Criminal Records to Wax ‘N Facts, and entered the now open store to hit the CD stock first. The prices were very modest with many delights in the dollar zone. I immediately cane across the new Underworld/Iggy Pop EP discussed in the comments already and for $3.00 is was definitely coming home with me. Echorich added his seal of approval upon seeing me pull it and show it to him. I only have scant few modern Underworld albums; I’ve concentrated on building a collection of Freur and Underworld Mk I but with those feats largely achieved [some 7” B-sides await purchase] the modern era of Underworld beckon. I saw the followup to the lone PWEI album in the Record Cell – “The PWEI Cure For Sanity” and I asked Echorich if it was worth the dollar asked? He replied “oh yeah,” so I went for it. I only ever had a few CD-5s from this album, long since gone since I stopped “collecting” PWEI.

Then I caught wind of the lone Jonathan Richman CD from his excellent Rounder run in the late 80s-mid-90s. “Jonathan Goes Country” which will finally let me hear the great song “Reno, Reno, Reno” in my native language. We only had his Spanish version of the song on the amazing “¡Jonathan, Te Vas A Emocionar!” album, and we could tell from that alone that this song was one for the books from the idiosyncratic singer. As usual, the high end of CD pricing here was the requisite fire sale pricing. This CD was just $3.00 [Discogs median = $9.50] this puppy was coming home with me!

Would His Royal Badness still deliver in 3-D?

The Malcolm McLaren project has been something I have been working on for the last five years or so, and the first of his CDs to enter the Record Cell occurred this morning with a US CD of “Fans” for $1.00 getting the immediate nod. This was one I had on LP but sacrificed during the Great Vinyl Purge with the thought of buying a CD later. 32 years later. As usual, I was looking for the last album by The Coup, “Sorry To Bother You” at every store I went to for the last few months. I’d buy anything we didn’t already have. As usual, it was no dice. My wife has worn out the online video for “The Magic Clap” and we need that in the Record Cell. But any CDs by The Coup seem to be terribly thin on the ground. I found two in Los Angeles last July. Nothing spotted east of the Mississippi. Thank goodness I was at least able to get a Prince album I needed to hear. “Planet Earth” in the lenticular sleeve looking mighty fine for $5.00. I felt it was finally time to take the plunge into post-Witness era Prince material, so I took the bait.

Who doesn’t have a volume of this series?

While it was good to see that the used CD stock in the store has not contracted any during the last five [?] years that I had shopped here, we were running out of goods to peruse and we ambled over to the much larger used vinyl stock of the packed store. Unlike the dreadful hipster “vinyls” stores, the new premium stock is a small niche here with 80% of the floor space given to the vibrant used stock that had always been the stock-in-trade of this fine Atlanta institution. I dove in in the middle first, since I saw a fat Graham Parker section calling out to me. Yow! There’s a copy “La Historian De La Musica Rock v. 59” featuring Graham Parker + The Rumour! Who knew? It might be fun to collect the issues from this series where I liked the artist, if I ever get bored! And check out the infamous “Live Sparks” promo only LP – yours today for a scant $5.00. I just got the CD of “Sparks” with this as bonus material this summer.

Textured and embossed? – SOLD [actually the hype sticker sold me]

A glance through the almighty “S” section that always yields bounty didn’t let me down. The “Spandau Ballet” section always gets a check even though I own far too many of their releases. Yowzah! Was that a UK pressing of “Diamond” complete with deluxe hype sticker??!! Yes, it was! I own many copies of this amazing album, but not this one. I tool it out of its plastic sleeve to observe it carefully and was astonished to see that the cover had textural embossing that was unknown to me! The outer gray edges had a leather grain texture [but of course!] and the cover text and photo were embossed. Say what you will about their sonic contents, but one can’t fault the first two Spandau albums for not pushing the graphic arts envelope. Those guys probably took royalty hits to make these albums look as posh as they did. I guarantee it.

“One of these things is not like the other…”

Since we were in “S” I had to look at the Simple Minds as well. There was a trio of UK 12” singles of note, but I had the ones that I would allow into my house already. I would not spend 10¢ on a 12” of “This Is Your Land.” As I moved forward through the alphabet, I didn’t find anything of great interest until the “V” section. While there were no Visage records that I needed, I mentioned to Echorich how I have never come across a copy of the US “Hearts + Knives” LP that I would buy even though I didn’t need a copy simply due to my esteem for it. I actually did need the recent 2xLP of remixed material that came out in 2016. But not today. Instead, it was Voice of the Beehive that delivered the rare goods. 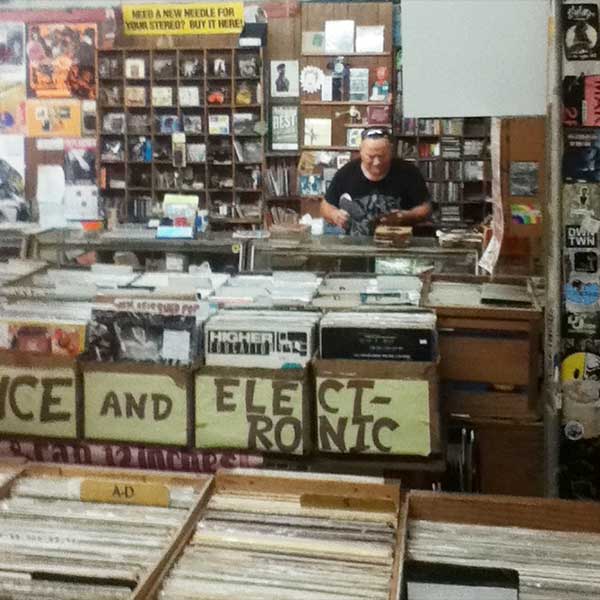 Though I already have a copy of it, the limited “I Say Nothing” 12” #2 [LONRX 151] in the silver-on-black cover with a rare B-side is not one that pops up every day. That noted, I worked by way backward to the start of the alphabet. Yumpin’ Yimminy! While I was cool to the idea of buying Jone Lewie’s “Kitchen At Parties” 7” I was over the moon about buying the incredibly rare “Gatecrasher” Sonet compilation LP ca. 1980 of all of the early pre-Stiff material from Lewie. You don’t see this bad boy every day! Five bucks and it was mine!

I’d never seen a copy of “Double Trouble” before!

There were more delights working backward. The Heaven 17 section revealed one that I’ve never come across before: the “Double Trouble” 2×12” of the second single from “Pleasure One.” That’s not my favorite H17 album by a long shot. I had flipped my UK CD of it several years back in a fit of pique, but now I’d need another copy since H17 mean more to me. But all they had was the US edition of that one with the alternative copper foil stamped cover. I really should have one of those, but with limited funds, the “Double Trouble” was a no-brainer! That’s even impossible to buy from a US dealer in Discogs, so in store for $5.00 was a signal to buy. That bad boy was coming home to the Record Cell! I now had both 2×12” singles from “Pleasure One.” The Canadian 2×12” of “Contenders,” and this UK 2×12” of “Trouble.” It seems like the extra tracks on it were from the US 12” single of “Contenders,” [which I bought on release] but I was buying this on principle. If it yielded music bounty was not my main concern.

I’ve never seen this before either

Working my way backward I found another record I have never seen in the “D” section with Thomas Dolby’s “I Scare Myself” UK 12” making an appearance. Perhaps one day, but not today. It was time to check out and link up with the ladies at Ware home base for our Thai dinner reservation at Mali later that evening. It had been important for Echorich to visit this store that practically built Little Five Points. Owner Danny Beard started the store over 40 years ago and when he couldn’t buy a Sex Pistols album he had to buy an import himself, and that set the ball rolling in Atlanta Post-Punk history. 40 years later, Beard is in the Georgia Music Hall Of Fame for his contributions as an indie label, DB Records. The home to the debut waxwings of The B-52s, Pylon, and Guadalcanal Diary, among others. We checked out and strolled back to the Ware compound. How was my budget of $64 looking?

Next: …Will Wuxtry Decatur Deliver? Would It Deliver Too Much??!