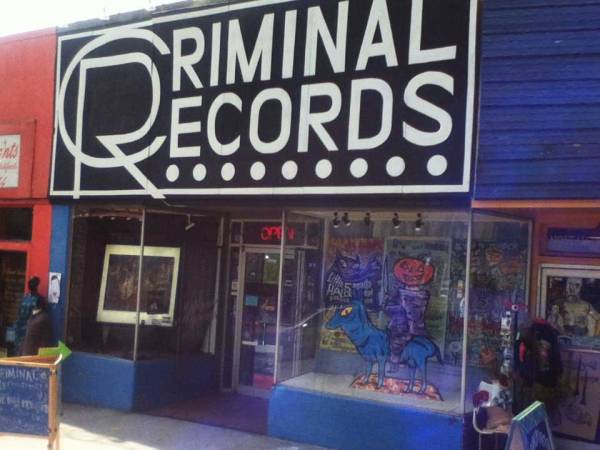 Criminal Records is always worth a trawl!

So the plan was that the wives of Mr. Ware and I had scheduled high tea at Tipple + Rose, an Atlanta tearoom for Sunday at noon. This left the gentlemen to their own devices, so I reasoned that this would be ideal record shopping time. While Mr. Ware and I have last shopped together in Atlanta on the occasion of chasinvictoria’s 50th celebration in 2012, Echorich did not really have a background in the classic Atlanta record stores. So I felt it cogent that we go to Wax ‘N Facts in Little Five Points. And when you go there, you’d be crazy not to also shop in Criminal Records just around the corner from the iconic Danny Beard store. The beauty of the lodgings we secures was that all three parties were no more than a mile or two away from each other.

Our M.O. was to swing by and pick up Echorich in the morning hours and we’d head to The Ware compound a few minutes away. On Sunday we did this and the ladies took off for high tea. The Ware compound, ideally, was situated on the corners of Sinclair Ave. NE and Seminole Ave NE, so Little Five Points was a 200 yard stroll away. We didn’t have to duke it out for parking in the hotly contested lot of the hipster magnet that was Little Five Points. We went to Wax ‘N Facts first but since it was only barely noon, the store wasn’t quite open for business. You know how it is in the record store biz! Showbiz hours. We tried Criminal Records instead.

We entered the large, well-lit store and Mr. Ware and I took pains to immediately point out the record we had seen there the last time we were there together. On the high wall behind the checkout was a sacred copy of the US only compilation, “Themes For Great Cities” by Simple Minds as signed by Jim and Charlie. Possibly on their last visit to the city in 1994, I’m venturing to guess. Any store with such a curated object placed so prominently undoubtedly had taste to spare! 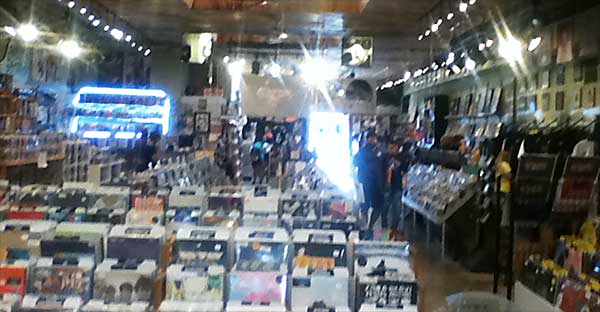 Criminal Records also had comic books, Blu-Rays and tchatkes. We ignored those. The three of us went right for the 12″ used vinyl in the back of the store. Which looked to be about half the size of the last visit I made there in 2013 while seeing Sparks in the Variety Playhouse just down the street. Gulp. We trolled through the old vinyl without seeing too much to quicken the pulse. But as I check my records [thank goodness for those!] I see that I have never bought any 12″ vinyl in the store. No, my purchases were relegated strictly to CD and …DVD! So I guess I can’t complain about shrinking 12″ used vinyl stock today. Thought I did appreciate seeing the Icehouse records that I already had. 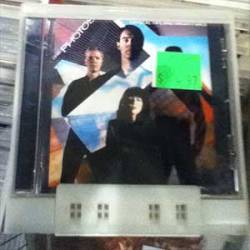 A great want list item I have never seen

After about a half an hour, we moved to the CDs and I quickly struck pay dirt! Laying out of alphabetized order was a copy of the second, buried treasure album by The Photos of “Crystal Tips + Mighty Mice!” Cherry Red issued this in 2008 following the success of reissuing their eponymous debut, and only released album. This was the followup [produced by Tony Visconti] that was shelved until Cherry Red licensed it from whoever owns CBS now. And at a healthy $4.97 price, it could not be beat. Mr. Ware saw the next item to catch our eye. 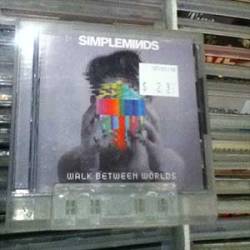 The US CD of “Walk Between Worlds”

He and I already had the DLX UK edition with the hardback cover book and three bonus tracks, so it was only of academic interest, but Echorich just had the DL and with albums he really favors, of course he prefers to have a hard copy, so that went home with him for only $2.97. I next saw the new Tracey Thorn CD and pulled it before deciding to put it back. I only have the first three Everything But The Girl albums and then I went off of the band during their MOR and dance periods. If I was spending freely I would have gone for it, but I was trying to stick to a budget of $64 that I arbitrarily set before making the trip. And when I saw the Hindu Love Gods album I just had to go with that instead. Since this summer I have finished my Warren Zevon collection – with the exception of this off the cuff cover album of blues and folk tunes and… Prince’s “Raspberry Beret” by Zevon and R.E.M. [minus Stipe].

I later saw that a copy of the Infinite Zero Gang of Four “Songs Of The Free” album was there for the premium of $6.97. I had no truck with the price, it’s worth more, but I could not remember which GO4 Infinite Zero DLX RMs I had at home in the Record Cell. In a moment of techno inferiority, I asked Mr. Ware if we could access my Discogs collection on his iPhone. After I logged in, I saw that I had “Solid Gold,” so yes, this one was another serving of Marxist Art-Funk every home needs in excess! 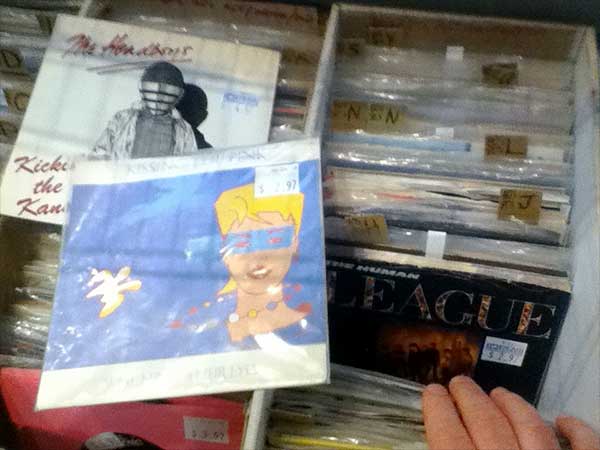 Yow! Headboys and Kissing The Pink amongst other delights

We next turned out attention to the 7″ vinyl [well organized] and that was full of enough delights to make me forget that I have never bought any 12″ vinyl here. Had I ever looked at the 7″ers before??! Maybe not as in large groups we tend to move quickly. I immediately found a Headboys UK 7″ that I need for a bonus track before I can remaster my sealed copy of their debut album. I’m more than fine with the <$5.00 pricing here for all of these fine import 7″ers. The “Kickin’ The Kans” 7″ had a non-LP B-side and I never see it for sale from US dealers in Discogs. Can you remember a time when you saw the “Watching Their Eyes” UK 7″ from Kissing The Pink?! Me neither. The B-side is from the LP so I passed… but even so, a rare bird for sure. 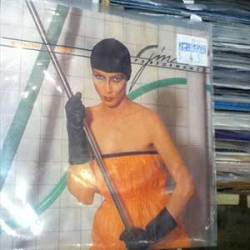 I next found a record I am now experiencing misgivings over not buying on principle, even thought I was trying to curtail excessive spending. How about the “Weekend Twist” UK 7″ from Gina X Performance? I can’t say I’ve ever seen more than ’85 onward singles from Ms. Kikoine. Hell, the LP that this came from  took 15+ years to track down. Of course the $4.50 price was very nice indeed. The B-side was the seminal “Nice Mover” from their debut album and Ms. K was looking very DEVO on that cover, non? This store was shaping up to have some of the better 7″ stock I’d seen in years.

Echorich offered me a copy of the “Kitchen At Parties” UK 7″ by Jona Lewie, and while I have lots of Lewie 7″ and even a 6″ singles, those were bought before the advent of Lewie on CD and I had both tracks on CD now, even though the Barney Bubbles sleeve was certainly ace it would be redundant in these budget-conscious times. In the end Echorich opted to take away the copy for himself. He also weighed an Altered Images single with David Band cover over in his mind before moving onward. 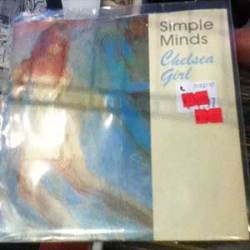 Could it be an omen on this weekend?

Then we saw a sighting so rare, I could hardly believe it. When was the last time that you ran across a copy of Zoom Records ZUM 11 – the “Chelsea Girl” picture sleeve by our heroes Simple Minds. I had to buy mine from a mail order catalog in the mid 80s and I’ve never seen one out in the wilds. As you can see the $7.95 price has been marked down to… I can’t tell from my blurry iPod photo, but whatever it is, it’s worth the asking! “Garden Of Hate” was a top B-side. Memo to self: the next time I’m in Criminal Records, just look at the 7″ bins and don’t waste time perusing the 12″ stock!

Okay, so only one of these was on the actual want list, but the other sightings boded well for the caliber of stock that drifts through this store. After about an hour or so, we started to gather up our merch and see what was staying with us. Mr. Ware was there for the ride; amused by the running commentary that Echorich and I made during the browsing. Is there anything better than shopping with records with friends? I say thee, nay! While I did drop about $20+ on some fine things here, the real value was in looking and talking with Echorich + Mr. Ware about the sightings. I’ve got plenty of store time with Mr. Ware as we lived in Orlando for 16 years, but this was only my second excursion with Echorich and we were making up for lost time. Is there anything more enjoyable? I don’t think so.

As we prepared to head over to Wax N’ Facts, Mr. Ware held up a twofer CD of Guadalcanal Diary’s “Walking In The Shadow Of The Big Man + Jamboree.” The latter was  only on vinyl in my Record Cell but the disc was unpriced. I took it to the register for a price check. The clerk asked the manager? “$2.97″ He replied” Sold, American! I already had “Walking In The Shadow Of The Big Man” courtesy of a birthday gift from Mr. Ware ages ago, but I had to have “Jamboree” on the shiny silver disc! So what did I take with me out of the store?

NEXT: …The Anchor Store of Little Five Points