So while the recent Simple Minds trip was all about seeing the band behind their stellar new album, and hanging out with The Wares and Echorich, there was going to be some record shopping to happen along the way. I have gone on record as wanting to trim my purchasing back down to moderate levels. The horse has already left that barn because I have already spent more than my outlay last year. Ideally the $60 zone was my mental target for the three stores we had planned on visiting. Quite frankly, I am buying too much music and I want to cut way back. besides, just looking at records is enough fun; particularly with good company. Since the ladies were going off on their own adventures on Sunday and Monday, the guys would be putting a brave front on in three of the better stores in Atlanta. But the first record store I visited was not even a hundred miles away from Atlanta city limits. 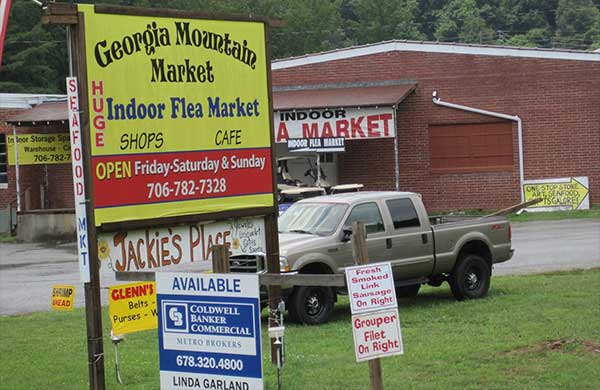 The familiar exterior of the Georgia Mountain Market on US-441 in Clayton, Georgia

We take the scenic route to Atlanta from our Western North Carolina home. This entails driving down the far west edge of the state into North Georgia towards Atlanta. It is faster than the interstates more commonly used for this purpose. The trip takes about 3:30 overall. And it’s certainly a lot more picturesque as we run through the Appalachians into the mountains of North Georgia. As we take many trips to Atlanta, for years we have passed by the huge indoor flea market in Clayton, GA, near Dillard. My wife will mention it and I’ll note it, but we never have stopped. Until this day. We had time to spare so why not? We used to be inveterate Flea Market junkies and it had been a long time.

As we pulled into the parking lot, I noted the emphasis made on the records to be found within, so we entered the enclosed building, which was a former warehouse or some such. The facility was an actual flea market, which means that it is basically stuff that people have dug up or are selling off from their stashes. This is an “old timey” classic flea market. Not one stocked with the same Chinese tchatkes new in plastic bags that every other vendor is hawking. The modern so-called “flea market” is a vastly depressing place but this once seemed to be genuine, though nothing in it was calling out to us. I didn’t have to wonder very long where the records were because it was apparent upon entering that there was a vast expanse of LPs for sale dominating the center width of the site. 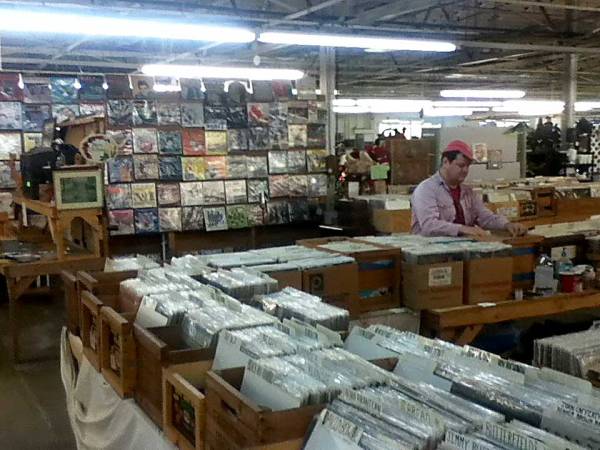 There were large, vertical displays of records as seen in the photo above, that are usually “high ticket” items and therefore of little interest to me. I went to the boxes, which were neatly ordered with title cards for most artists and everything was bagged. There actually seemed to be title cards for artists that I liked. If a flea market in North Georgia had a Boomtown Rats section in the in-house record store, you could do a lot worse!

Eric’s Records claims inventory of over 20,000 albums and I believe them

All your records are belong to Eric’s

The photo above that I found online gives a better impression of the vast quantity of stock at Eric’s. Most stand-alone record stores don’t come close to this size of a layout. I have no doubt that every record extant in a 50 mile radius [see left] eventually finds its way into the stock at Eric’s Records. So where would I begin to start looking at this immense mountain of stock? When presented with a conundrum like that, I generally try to get my bearings at first, so I’ll look at what is on offer from an artist I have an interest in. Why not start with David Bowie? Even though there’s almost nothing by him that I need?

Gaaaaaaahh!!!! The copy of the “Pinups” album was a little “soft around the edges,” but that didn’t stop Eric from pricing it out at a crippling $50.00 price point!! My normally reticent lips easily let loose with a reflexive profane outburst as I shared my shock and disbelief with my wife. Could this be an anomaly? I looked further in the bins and found a gold stamped promo of David Bowie’s worst album [this week – it changes all the time for me] and responded again with some more colorfully salty language. You could buy “Never Let Me Down Again” for a scant [in comparison to “Pinups”] $28.00!!

Even three dollars is too much for this one!

Bear in mind that this one will set you back about $8.00 on Discogs.com in comparable condition. So my head was spinning as I stumbled through the stock, noticing that there were actually some halfway decent records here, if this was your only record store to shop at you could do a lot worse when it came strictly to stock, but the choice between a week’s worth of groceries and an LP was one that I’d bet not too many locals could find themselves making. But golly, they actually had some Ultravox records as low as $10.00. That seemed to be the lowest price point in evidence here. Insane! I stumbled to the Prince section …just because.

So, early Prince is worth two dollars less than subprime imperial Bowie?

Yow! The second Prince album was only $48.00 here.  Discogs median price? $12.65. Even if they gouged you on shipping we’re looking at a bargain next to this overpriced clip joint that made me table-flipping mad!

So I thought I’d seen it bad when venturing into a similar “record store” within an antiques mall in Asheville earlier this year, but this was beyond the pale! Truth be told, the whole “vinyl renaissance” hype has been picked up by the tourists out to make a fast buck with laughable pricing in antique malls, thrift stores, and flea markets. I see a lot of this. It’s bad when record stores are your bastion of cheap vinyl but there we are. I spent maybe a total of 8 minutes drifting though this insane space filled with records that were priced 5-6x their real world value. We spent another 45 minutes checking out the other stuff here to only shake our heads and realize that we were right not to stop here for so many years prior. It may have been a real flea market, but it still was not a good one.

The nice upside, beyond giving my spleen a good workout, was that I would not be eating into my modest music buying budget before our arrival in Atlanta. I knew for a fact that the stores we’d be visiting would be priced at the extreme low end as compared to this rip off.

Next: … Back to Little Five Points – by foot