Posted on September 20, 2018 by postpunkmonk 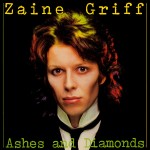 I first heard of Zaine Griff when his debut solo album [he had a long prior history in NZ/UK glam bands going back to the early 70s] “Ashes + Diamonds” in 1980. As Tony Visconti produced and a review I read in local New Wave paper Dogfood cited Bowie influence, it registered on my radar at the time. It sure looked it from the cover. [see left] Griff had also studied with Lindsay Kemp around the same time as Kate Bush had so he was more than trending in that direction! Kudos to Griff for using the title “She’s My Man” eight years before Sigue Sigue Sputnik thought of it. In 1979, probably when recording his album with Visconti, he found himself roped into some quick remake sessions with The Dame when he wanted to revisit ” Space Oddity” and “Panic In Detroit” in new versions of those songs that were released as B-sides and CD bonus tracks. Griff played bass on these and even Bowie remarked on how much Griff resembled him at the time. I only got a copy of the LP [unplayed] about 15 years ago at a Goodwill [!] but the more I looked into Griff, the more I knew that this was the music for me. In 2012 our friends in Japan released DLX RMs of both of his solo albums but these are pricy and scarce. The same year, Griff [long since decamped back to his native New Zealand] issued straight [no bonus track] versions of the two album in those pesky Super Jewel Boxes® and now I have one of them.

Right from the starting block one gets the sense that this will be a rich, decadent, synth heavy album of the kind that was only made up to maybe 1985. You know. A line that ended with “A Secret Wish.” “The Provd Ones” stakes a claim boldly with a finely etched glittering synth arrangement featuring three master keyboardists on this album for our consideration: Andy [Be-Bop Deluxe, David Bowie] Clark, Yukihiro [YMO] Takahashi, and Hans [Zaine Griff/Buggles] Zimmer. Along with Warren Cann drumming and Bill Kristian on bass. There would be no guitars on this album. There’s no room for them! Just that galloping beat, magnificent synths, and Graham Preskett proffering a berserk violin solo not a million miles away from his similar turn on Mott The Hoople’s “Marionette.”  Griff rides that wave like a champ. This is a glorious statement of intent.

I liked “The Vanishing Men” even better. The clockwork rhythms complete with backbeats and soaring synths definitely compared well to the music on Spoons “Arias + Symphonies.” It’s that sort of energetic yet busy technopop full of classical filigree with the biggest difference being that Griff had more vocal power than Gordon Deppe. He really belts it out on this one. Warren Cann gets to go nuts with the Simmons drum breakdown/solo in the middle eight. Cann cannily avoids all taint of Ultravox rhythmic tropes here so as usual, his extracurricular work is completely different.

The title track was a glorious ballad full of sustained dramatic chords and European atmosphere; marking this album as being exactly what I expected from the onset – one of the final flowerings of the New Romantic movement. The song was an homage to Lindsay Kemp and Griff was able to ask fellow alumnus Kate Bush to contribute a backing vocal here as he thanked his teacher for the beauty that he shared with his students in addition to knowledge of figures like Jean Genet.

“Fahrenheit 451” was a compulsive epic of the desolate embers of romance over a motorik pulse and orchestral stabs. This one really had the whiff of material from the first Buggles album with the Fender Rhodes piano swirling together with the swelling synths and ultra taut clockwork rhythms rhythms.

The sprightly melody of the euphoric title track was a perfect  3:00 single with the synth string refrain almost daring to venture into heartbreak territory. The lyrical multi-metaphor for the dynamism of form and movement as well as the promise inherent in a lady’s phone number is shot through with a barely constrained giddiness that makes one glad to be alive hearing music like this.

The fast paced “83rd + 4th” could have well inspired Cossack dancing in the right clubs of the era. The string synths, funky bass, and sharp rhythms pointed the way back to Mother Russia even as the lyric referenced New York. The swooningly romantic “Chance Of A Dance” was as perfect a pop moment on this effervescent album and a definite lost single as the chorus hit like a ton of bricks.

Zaine Griff made all of the right moves to be an obsession of mine from the time period. That I only ever knew about his first album and not this one, was a tragedy but at least that has been corrected by now. Zaine Griff was a tremendous Bowie-influenced artist with his roots deep in the glam era; in that way, he ran a parallel career to that of Peter Godwin, which means that I am all over this music. Let it be noted that Warren Cann played drums for each if them and if they were not playing this album in New Romantic clubs in 1982, it could have only been because the scene had moved on to Latin funk in the wake of Kid Creole.

This album was a heady brew of almost everything I cherish about Bowiesque club music packed with the sort of melodic frissons that threaten to overwhelm with overindulgence. If there is a weakness here, it’s that the songs are packed with a surfeit of grandiloquent classically derived gesture that almost becomes taxing to listen to. The production by Griff and his right hand man Hans Zimmer is unfailingly inventive and packed with even more sonic and melodic detail than Trevor Horn brought to the table in his ZTT era.

Zimmer shows why he’s been the go-to man for soundtracks for almost 30 years now, and the crying shame is that the unreleased Helden album, “Spies,” which was made at the same time as this recording, is probably a seamless mirror twin of this album. Helden was the duo of Zimmer and Warren Cann with several singers, including Griff taking duties like a hip Alan Parson’s Project. I may never hear that album, but having “Figvres” is more than compensation. This was spectacular, glittering music of a kind that was probably in its twilight as they were laying this down on tape, sadly.

CONCLUSION: enjoy like mad… and buy the DLX RM of this album with “Ashes + Diamonds” like pronto!