Posted on September 16, 2018 by postpunkmonk

I first became aware of Elli Madeiros in the late 80s, when I saw her video for the song “Vanille,” on MTV International in 1990 or so. I bought the CD, “Elli” that had the song in Canada two years later where it was much easier to scratch the Francophile itch in Quebec! For years I had no awareness of her history with partner Jacno either as Elli + Jacno or with their primordial soup band of Stinky Toys all the way back in 1977. 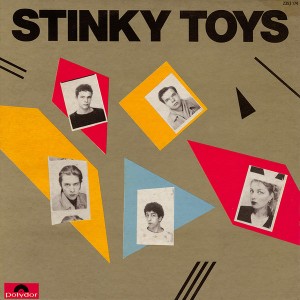 While I’ve been a Fancophile for so long, I can remember the huge biases against French music from the 70s and 80s; before artists like Serge Gainsbourg gained the currency of hipness amongst the cognoscenti. French rock was unilaterally despised. Fripp called even the mere act of singing in French “Gallic bleating!” In 1977, the first band with a single out on Rough Trade was Metal Urbain with “Paris Marquis.” Now Metal Urbain was an amazing band who prefigured industrial/EDM sounds to come in the next decade. So maybe I was overly sold on the idea if French punk rock. Because, in spite of her Latin/French hybrid with 1989’s “Elli” album, which I’ve had for years, or the techno pop of the Elli + Jacno years, Stinky Toys were pegged as one of the first French punk rock bands. Let me beg to differ.

While this music is certainly an attempt at something snotty, the music was as leaden as what punk was desperately trying to replace. And at stage one of her career, Elli Madeiros was incapable of singing punk rock or even emoting very much at all. And if you’ve got punk rock that just sits there, like this music did, you haven’t; got punk rock at all. Let me state that this was the most painful 30+ minutes I’ve ever been party to hearing. Listening to this album was like a slow motion torture session of incredibly poor music as the fulcrum of pain.

It took immeasurable self-control for me to bear listening to this even once, many weeks ago, to eventually type this review. And while I usually listen to a title at least 4-5 times to dare to pen a review, I found it impossible in the case of this album. There’s only so much I am willing to bear for PPM, and this album crossed that line! So while I will have time for any Elli + Jacno or solo material from Ms. Madeiros, under no circumstances will I be attempting to obtain the second Stinky Toys album from 1979. The rest of you are on your own.