After we arrived at Brennan’s [once we figured out where to park] we began setting up the gear. It didn’t take too long to do. The pub had a lawn area outside where people were already playing bocce ball in the fairly comfortable late afternoon weather. Chasinvictoria, Mr. Ware, and I retreated to the inside of the pub to secure dinner while The Wayfarers, the first band playing, were sound checking. This band had roots going back over 30 years in L.A. and their guitarist and drummer, Cary Berger and Jim McGrath, were also in the Record Man Orchestra, so the crossover was there.

As we began eating our food, the call came for The Record Man Orchestra to sound check next. Mr. Ware and I had finished, but owing to a mishap, chasinvictoria had just been served when we had to go outside, so he just took his dinner with him. Outside the pub regulars were already out in force as teams in colorful garb were playing what was described to me as “beer pong.” The game entailed tossing ping pong balls in glasses of beer? Okay then. You can see that I don’t get out much. The band got their sound quickly down with the sound engineers and then the show began around 7:00 with an introduction by Bob Gaulke; the man who made the whole Ron Kane Tribute Album happen.

Many of Ron’s friends had by then arrived and were sitting outside with the normal pub patrons, having their regular Saturday night fun. If 60-80 people were specifically there for the concert, then twice more were just there for an evening’s fun. Several people were having brief solo sets early on. Mark Moerman was the first of these and he sang a few numbers, the most intriguing of which was “Pondering The R. Kane Mysteries,” a re-do of the song he wrote for the first Ron-Kon in 2008. I’d seen him perform the song in Portland at that event, but  for this evening, he re-wrote the lyrics using a phrase that Ron himself liked to use. In the context, Mark re-cast the song about how difficult it was to really know or to have any intimacy with the man. I was fascinated by the knowledge that it wasn’t just me. This condition of Ron’s, shall we say, remote qualities was spread among many of his friends. Hearing things like this were the reason why I made the effort to attend this event and it was really paying out big dividends for me. I’d wanted to learn more about the enigma of Ron and his friends were helpful in painting a wider picture of him. 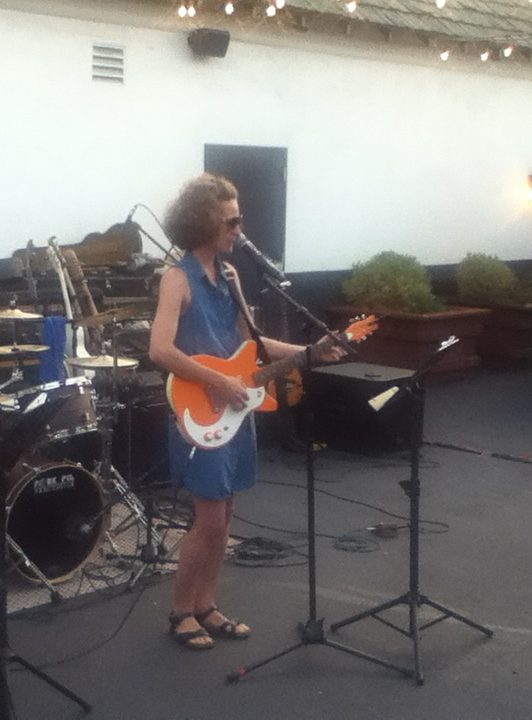 Next up was Peri Mason, who also performed in the large band. She was a singer from Athens who had made her way up to New York where she had met Bob Gaulke, who was the her entry point into the world of Ron Kane. While she had contributed to the tribute album, her singing tonight would play a much bigger part in the proceedings.

The Wayfarers went back a way and most member of the band had histories with Mr. Kane

Some of Ron’s friends said a few words or played a song or two that was “Ron significant” and then it was time for the first band, The Wayfarers, to take to the stage. They had a fantastic 60s spypop/bossa nova vibe that made us all hungry for more. They reminded me of a poppier version of the Atlanta act that chasinvictoria introduced me to decades ago, Cicada Sings. Then David Ponak, whom I met at Rockaway was there to join The Wayfarers onstage for a song. I need to contact Mr. Berger and find out if the band had any other music to buy than the 1986 LP on the [but of course!] French Lolita label. Which has been on my want list for a few weeks now. Yow! they also have a non-LP blue 7″ of “Esperanto” which came out the year prior and sells for crazy money on Discogs.com! I’ll also have to ask Cary about that to see if he knows the reason why. Maybe Tori Amos sang backing vocals on it some such.

Then the seven songs we had been at rehearsal for the last two nights for were on next as the Record Man Orchestra played their set. Played in order from the album were: “The Record Man,” “Greatest Cheeseburger,” “Unpopular Music,” “How Can The Human Heart Occur In The Universe?,” “Today’s List,” with “Manatees From Other Galaxies”wrapping it up before the “bonus track.” Ron had let everyone know that Cream’s “Doing That Scrapyard Thing” was to be played at any “wake” he night have. And this was certainly that.

By this time, most of these songs were worming their ways into my skull pretty effectively. I was loving “Greatest Cheeseburger” and especially “Unpopular Music.” What a great title for a song and it certainly described Ron’s music listening ethos. For my part, I almost always consider what I enjoy to be “pop;” just somewhat colored by the fact that it is actually not popular. So I really got that one. Chasinvictoria and I performed “Today’s List” and I had my musical debut. It felt strange standing at a mic with a band behind us for the performance [not really a song]. Given the nature of the track, we worked from a lyric sheet. Since we only had one, I had to copy the list to my iPod touch, and I did that while The Wayfarers played. We traded lines back and forth for the brief [for Ron] list of 24 purchases. After we ended it only occurred then to me that we should have assumed Run-DMC stance, arms folded across our chests. The end result I’d call Run-DMC-meets-Ernie Anderson. Pretty weird, but Ron – we did it for you!

Afterward, Mark Moerman sang lead on the whimsical and psychedelic “Manatees From Other Galaxies” and this evening it really took off into the stratosphere courtesy of guest skronk sax from Ace Farren Ford; one of Ron’s bandmates from The Decayes! Ace was an older, wilder gent than I will ever be with a huge mane of grey dreadlocks and an unfettered outlook from a lifetime of playing with a wide variety of alternative ensembles. He was the link between the L.A. Free Music Society, of which he was a member and Ron Kane’s Decayes. He certainly added the edge of excitement needed to make the song I’d heard in rehearsal really take flight!

Following that, Rick Snyder stepped to the mic to sing lead on “Doing That Scrapyard Thing” and the evening reached its end. Afterward, I had the chance to speak to some of the poeple who I had not see earlier at Rockaway Records. I can’t remember how I came to meet and speak to Steve Stanley, but someone seemed to have told him that I was a Simple Minds fan and he had lapsed [like many] at the time of “Once Upon A Time” so he wondered where to go from there. Of course, I had some suggestions! Steve was not really one of Ron’s friends; he was there to see The Wayfarers, and he runs a serious reissue label, Now Sounds. Then we met a young man who was one of the newer breed whom Ron mentored in his role of record collecting sensei. It was heartening to see that the younger generations weren’t neglected by Ron in his duty! Chasinvictoria and I spoke to him at length and he was fairly new to the world of Kane; having only met him in the last few years. Then we both spoke to David Ponak some more. It turns out he had a background of working for Rhino and he knew our old high school friend, Randy Perry, who also did time there for about a decade. Lotsa fun.

The evening had unfurled nicely and this was a first for me to be involved in something this elaborate to memorialize someone’s death. With about a third of the audience there because they knew Ron Kane, the rest were just going with the flow. It made for a weirdly soothing vibe with the two tribes intermixed like that. While this was our friend’s memorial, it also served as a Saturday night out for many others. As usual, we broke the stage down and headed for the home base and another 5-6 hours of sleep. Tomorrow it would all happen again at Rockaway Records, but first there was one more record store to browse.

Next: …The Monk Returns To The Spawning Grounds…and Buys Records