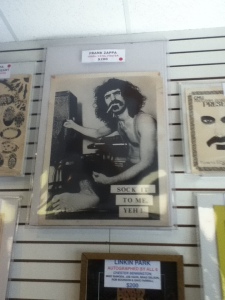 This Zappa ephemera was almost certainly from Ron’s collection

We started our Saturday by meeting the rest of the Ron-Kon II crowd at Rockaway Records at 11:00 a.m. A parking lot was welcomed, and we hit the store and saw evidence of Ron immediately upon entering. Frank Zappa memorabilia was up on the wall at the door. The medium sized store was cozy with stock [but not overcrowded]  and was brightly lit, air conditioned, and well organized. In short a best-of-breed store that made perfect sense to house Ron’s immortal remains; his record collection. We were there as well as everyone from the rehearsal just eleven hours earlier. I recognized other people who were not playing in the concert from the first Ron-Kon event in 2008 on the occasion of Ron’s 50th birthday.  Then there were more people who were new to me. As well as a few “normal” customers who might not have known Mr. Kane. 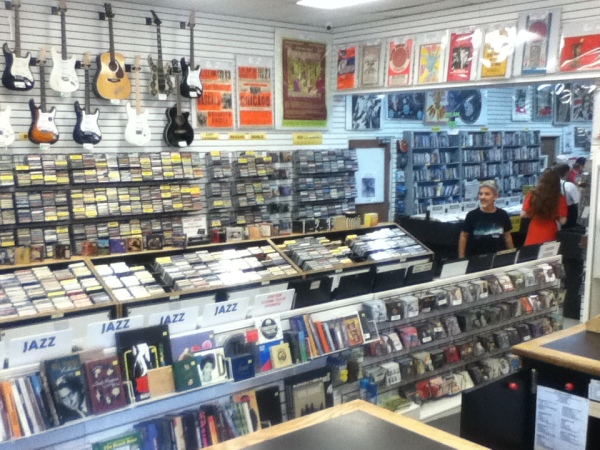 The Rockaway interior, complete with signed guitars on the walls

Looking up, I was delighted by the Bowie-mobile® hanging by the checkout counter from the ceiling. Today was the shopping trip. Tomorrow the in-store concert. The glass case by the counter held the albums by The Decayes which I had never seen with my own eyes before. I made sure to buy copy #75/300 of the last [excellent] Decayes album, “Aquarium.”A must-have! Especially since Ron said that the CD [which I have] and the LP were different. After getting our bearings, we began going through the stock.

I started with the 12″ vinyl and it was soon apparent that there was a reason why Ron wanted his collection sold here. It was the most tightly curated selection of record store stock I’d ever seen. There was nothing here to waste your time. Everything was “interesting” and material of the sort which my East Coast eyes rarely saw. There was no “chaff.” No mildewed records in the dollar bin. No copies of “Saturday Night Fever.” Even “ironic” ones. Which was not to say that the store was “pricey.” I’ve been in stores that had infuriatingly overpriced stock. Many records here were bargains. “high end” merch was priced accordingly. Tellingly, a framed photo on the wall showed a copy of “Revolver” signed by all four Beatles that the store had sold for $100,000.00. But it was still a store where cheapskate me could get a lot of mileage out of the $125 I spent there – 20 titles. 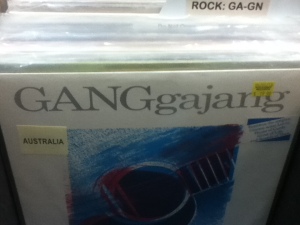 The bins had an insane preponderance of Australia/New Zealand bands in evidence. Ron’s NZ collection was probably the biggest in North America. He practically lived there in the 80s and if you ever bought a Australasian pressing of anything in the northern hemisphere, in the eighties, chances were that Ron was the guy who imported it! One of Ron’s [relatively few] American passions was the great Wayne Cochran. I saw two albums there which had Ron writ across them in large, neon letters. 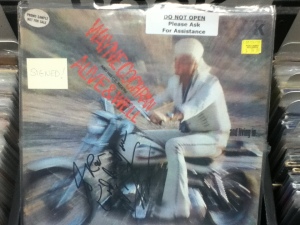 Autographed to Ron from Wayne, natch.

Mr. Ware had acted as the go-between when Wayne was doing a rare in-store appearance in Orlando’s Rock + Roll Heaven. Ron actually shipped his albums to Mr. Ware, so that he could get them duly autographed. Cochran’s “Alive & Well & Living….In A Bitch Of A World” [King 1970] is not a record commonly found, much less the autographed copy here. Coincidentally, Ron died just nine days after Wayne did on November 21st, 2017. 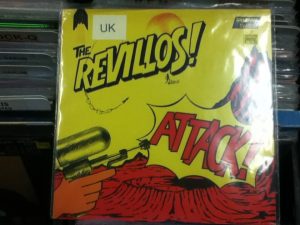 I’ve never seen one of these in the wild!

I picked up an inexpensive copy of Ken Lockie’s “The Impossible” solo album from Virgin ca. 1981. I had one of these, but it was a cheaply sourced $4.00 copy  that was VG at best. This was Ron’s personal copy [the sticker insured that] for only $4.99. It would surely digitize cleaner than the one I had managed to snag!  I also got the one Intaferon 12″ that had eluded me for 30+ years: “Steamhammer Sam.” As i recall Ron was a fan, so this might have been one of his. Gloryoski! A rare sighting of The Revillos withdrawn second UK album “Attack!” was surely another Ron disc. At $29.99 I’d call it a bargain, but I was grateful I’ve had a copy for decades in the Record Cell. I could save my shekels for something even more rare looming ahead. I saw a 12″ of “Quiet Men” from Ultravox, but that was another one I’ve had since about 2001; thankfully.  Then I caught something which I’d never seen before that was Ultravox related. 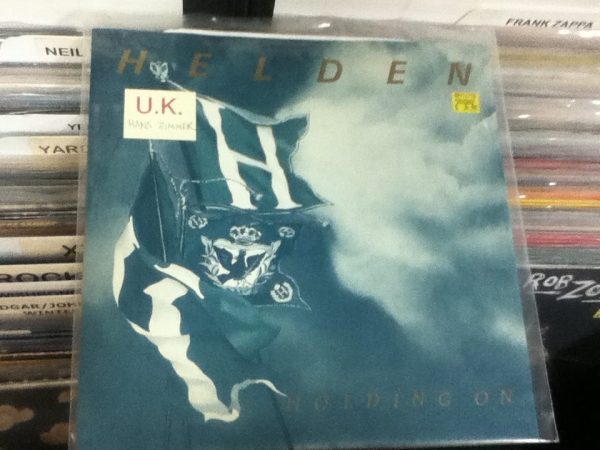 I had heard of Helden, the side project of Warren Cann and Hans Zimmer in 1985, when I bought a copy of “In The City” UK fanzine with a bonus Helden 7″ single. Helden was a 1983 project that had resulted in a stillborn album and one released single on 7″/12″ and here was the 12″ of “Holding On.” Of course, Ultravox fans want this but they are outnumbered by the fans of Hans Zimmer, who from 1988-uh, yesterday, has become one of the preeminent scorers of films in the last 30 years. Those soundtrack guys are among the most obsessive record collectors out there! This baby was a hefty $34.99… too rich for my blood. But before I finished raking through the 12″ vinyl, I would find one high-ticket item that I could not say no to.

Next: …The Shiny Silver Discs