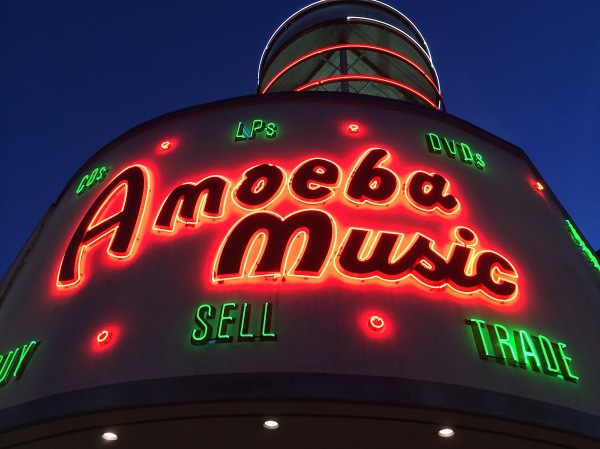 The CD selection here actually had things I wanted – badly – to buy! The feeling was something that gets more and more rare over the last 30 years as I no longer occupy the “hip music buyer” demographic. I first hit the “electronica” section since the last time I was in this store, I picked up Wrangler’s “LA Spark” CD and still needed “White Glue.” No dice, but I thought I’d ask the workers stationed at the search station, just to make certain. No dice! But the section did manage to yield the Ursula 1000 album “Here Comes Tomorrow.” Vitally necessary for the only Cristina song released after 1984! I then moved onto the “rock.”

For once, when I looked in the ABC section I saw their latest CD which I had needed for a couple of years now! One would think that “The Lexicon Of Love II,” being a sequel to their highly regarded and very successful debut album that people has been desiring for decades might have been a little easier to source in the all of the bins out there in the world I paw through… but you’d be wrong. This was the only time I’d ever seen a copy. $13.98 or not, it was leaving there with me! I moved down the alphabet. It was astounding to see all of the Associates recent DLX RMs ready for purchase. I didn’t bite though. I felt I should get those online later. The discs here, if new, were a typical $11.98-13.98 retail. And those only had a scant handful of tracks new to me. And I think they still muffed the mixes on “Sulk!” The UK LP has never made it to the shiny disc intact. 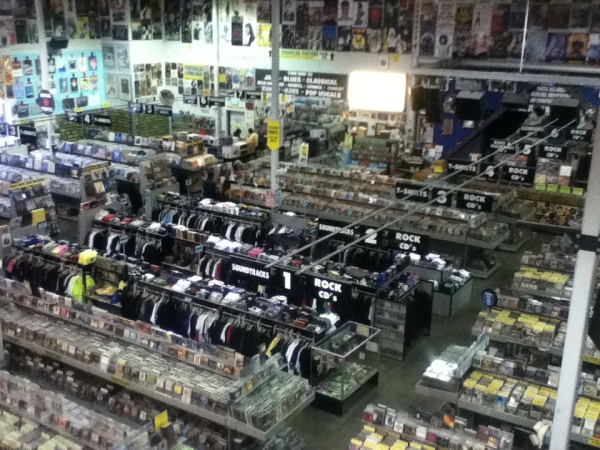 I had written about the 2012 re-emergence of faves B Movie before, and their “Age of Illusion” album from 2012. You could imagine my surprise when I saw a further new album dating from 2016! Enough said. All bets were off as I saw all of the China Crisis DLX RMs! These I didn’t have earlier (I had the 2000 series V2 Associates SLX RMs already) and they had all three. Paradoxically, I only bought 2/3 and skipped my favorite album of the series in the process! I went for “Difficult Shapes” since they had a used copy there (!) and sprang for a full price ($19.98) copy of “Flaunt The Imperfection” since my PDO copy had severely bronzed from day one. I had initially bought the ’85 Nimbus pressing but a friend needed a copy and I gave her my old one and bought the new 1990 pressing since it had better cover printing. The 1990 pressing was the only CD copy that came close to the beauty of the LP. I decided to wait on the 3xCD version of “Working With Fire + Steel” since that one was a hefty $24.99. 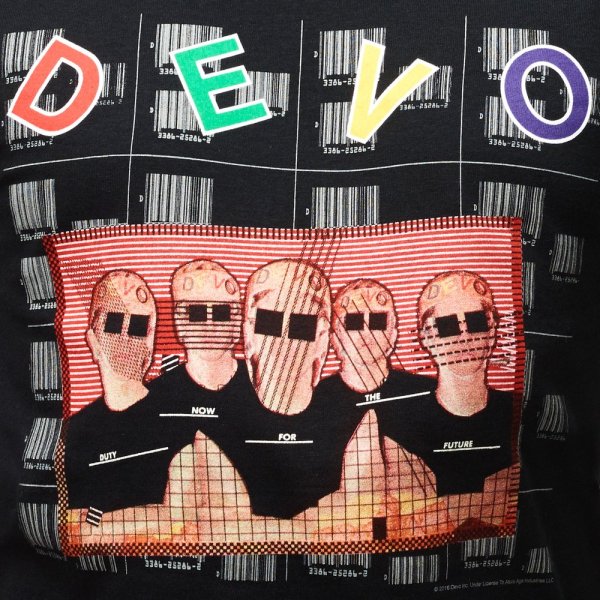 I noticed that there was a huge T-shirt section and feeling regret for not buying that amazing [but probably bootleg] “Duty now For the Future” T-shirt the previous day, I chanced to look at the reasonably large DEVO section in the shirts. There it was. It was probably legit after all, and it was coming home with me for the underpriced sum of $20.00! You can buy yours here for a jaw scraping $15.99. 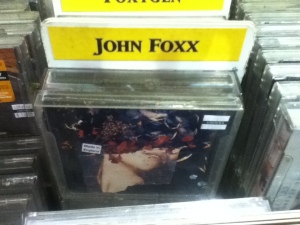 I next lingered in the DEVO CD section and I finally made my move after coming close in these last couple of years. Heck, I even had it in my hands the day prior at Soundsations Records. Yes, the “Something For Everybody” album was finally coming home with me. The John Foxx section didn’t have any of the scant few I still need but hey – John Foxx section! How often to I type those words without invoking my Record Cell? I had to call chasinvictoria over when I reached the Kraftwerk section. They had the Katalog and 3-D Katalog boxes but what caught my eye was the limited “laptop edition” of the “Minimum-Maximum” live set which came in a case designed to look like a laptop. 2xCDs and 2xDVDs inside an amazing case. Wow – talk about form following function! It can be yours if you want to drop the $150 necessary. I already had the CDs and separate DVD sets purchased separately. 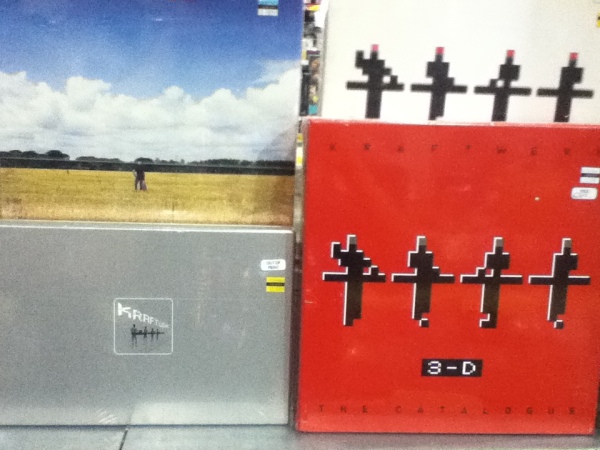 The cluster of Kraftwerk boxes 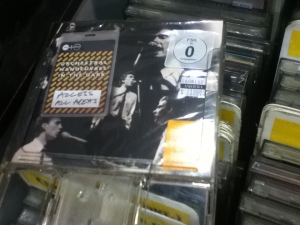 The last OMD CD I needed…

Spying an OMD section, I looked. I always look. Boy Howdy! They had two copies of the “Access All Areas” CD/DVD of early ITV live performance from the time of the debut album. At $11.98 it was a no-brainer. Andy McCluskey was not happy about it appearing on the Edsel label, but there was naught he could do about it. “Enola Gay” in its early arrangement shows up in the set list so having it on DVD was a must see type of event.

This being L.A. I was happy to see the “Befour Three O’Clock” CD of “Happen Happened.” I have been making moves on the band and my only CD made this year was Three O’Clock material evading the shiny disc. I got a couple of Robert Palmer albums I still needed. I’ve been working that action for several years now and some are really difficult to find. As were the titles by Warren Zevon and Graham Parker that I still lacked.  There are huge chunks of Parker’s oeuvre that are hard to source, but here I found “The Real McCaw” and “Songs of No Consequence,” which hardly litter the bins. With Zevon I got the last two albums from his late period Artemis run. Now I only needed one CD for a complete set. 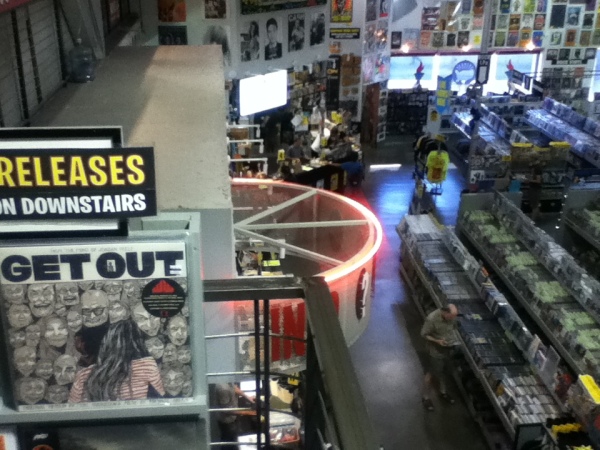 From the Video section, over the LPs

When I got to the traditionally rich “S” section, there was a used copy of the DLX RM of “Suicide” I would no longer live without hearing this seminal disc and its fine complement of live bonus material, including the infamous “23 Minutes Over Brussels.” Finally, I got the two recent Ultravox DLX RMs I needed. The “Lament” 2xCD was the only one of the 2004 DLX RM wave that I still needed, but the 2017 edition was the only CD of this title that came in a matte black, thermographically printed digipak which replicated the original limited edition UK LP [which I have – rest assured].  The “Return To Eden” had been issued in a different package in 2010, but had been OOP for many years, so I took the effort.

With that, I met up with my compadres and we looked over the heavy bin of music and put just a few things back. Unlike the last time when I hit the store at the end of my trip, instead of the beginning. The budget was still young this time, and I wasn’t so carefree. After all, this was Amoeba Hollywood! One didn’t shop here every day and goodness knows, I was not planning on returning to L.A. again. This was one last hurrah for Ron Kane. And it was going to get much more interesting than even supafine record shopping.

Next: …Our Heroes Quest