The second disc of the DLX “Metamatic” hewed close to what was last released when the 2007 2xCD DLX RM came out years earlier. The ten crucial non-LP A/B-sides were all accounted for and the alternate versions that had leaked out years after the fact were also here. As were the single mixes and longer edits that were trimmed for inclusion on the original album. There were ultimately five more tracks accounted for here but the crux of disc two had appeared earlier; and in the case of disc two of the 2001 “Metamatic” DLX RM; in exactly the same running order.

The second disc still made a 2-ton first impression with the unbearably heavy “Film One;” the B-side of “Underpass” and one of the all time great B-sides. The grindingly dense instrumental juxtaposed its methodically paced, insect-like CR-78 chitterings with poundingly heavy ocean liner steamwhistle synth bass that reverberated for days. It suggested the heavy [possibly early Moog Taurus?] bass from Bowie’s “Fame” rendered even more crushingly powerful here. There’s not much to the track save for a sense of dread and doom that made Black Sabbath sound like Pollyanna.

When the 2007 DLX RM debuted “To Be With You” and “Cinemascope” I was astonished that these songs, that were so substantial, had been under wraps for decades prior. It transpired that I never read the fine print in the booklet to that edition which stated: “sampled and re-assembled from ideas and fragments found on cassette using only analog gear.” Now, then I listen it leaps out at me; these half-finished ideas from ’79-’80 were actually finished nearly 30 years later! No wonder I commented many years ago that “Cinemascope” is a fully formed track that sounds astonishingly contemporary when heard next to his modern material with Louis Gordon.” That’s because it was utterly contemporary to that material!

Now I can hear the age in Foxx’s voice and the delivery of his on “To Be With You” was full of the arch, dry vibe he didn’t add to his vocal arsenal until 1997’s “Shifting City” album. “Cinemascope” was built on a rubbery, squelchy, lurching rhythm bed and the lyrics to this one positively exploded with cinematic metaphor, which was always just below the surface in Foxx’s songs of this time period.

The “Burning Car” single took his J.G. Ballard influence to its ultimate conclusion. After the crash comes the burn. The fat, velvety, divebombing synths showed Gary Numan how it was really done. “Glimmer” and “Mr. No” were both “No-One Driving” instrumental B-sides which were worlds away from what was going on on the “Metamatic” album, but we’re so glad they made it out of the sessions like the superb instrumental B-sides they were. The contemplative “Glimmer” and the crystal rhythms of “Mr. No,” complete with its impenetrable foghorn synth leads would manifest a quarter of a century later as Foxx’s “Tiny Colour Movies” project.

“Young Love” and “20th Century” play together like a winning hand. “Young Love” was a very early track that was probably among his earliest solo compositions. It doesn’t sound like he had the CR-78 yet. Like many other songs, it was mooted as his first single for Virgin before that role was taken by “Underpass.” Both tracks prefigure the 8-bit chiptune movement that would be happening a few decades later as Foxx generates tight, monosynth riffs punctuated by white noise explosions. “20th Century” has such a wide stereo separation it sounds binaural! It’s hard to believe that the song had been commissioned for the youth TV series “20th Century Box” with such a radical for its time theme. 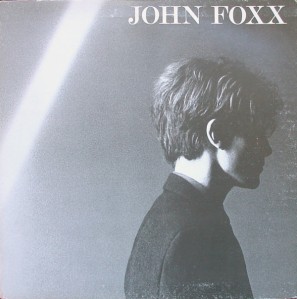 The last of the core tunes from this eclectic alternative to the “Metamatic” we know and love was “My Face,” the motorik technopop number he initially gave to Smash Hits magazine for a flexidisc in their October 2, 1980 issue. He had just cut a trio of songs for his “Miles Away” single [judging by the appearance of drummer Edward Case and Jo Julian engineering this track] and this one was the odd one out. As it was less cold and foreboding as his album cuts, that made a kind of sense, but really, the song was perhaps more approachable as a single for the radio than anything on the album. Had he issued it as a single, it might have been the top 20 hit that never happened for him in the environment of the time. As it was, Virgin Canada plucked the number for the 1981 Canadian “John Foxx” album that cobbled together half of “Metamatic” along with various A/B-sides in lieu of an actual “Metamatic” release. I was happy to hear it at the time on relative high quality vinyl instead of a lo-fi flexidisc.

Next: …Filling Out The Margins