Monastic Musings Part Two: Meet The New Boss, Same As The Old Boss, or “They Found A Way To Make Vinyl Even Worse” 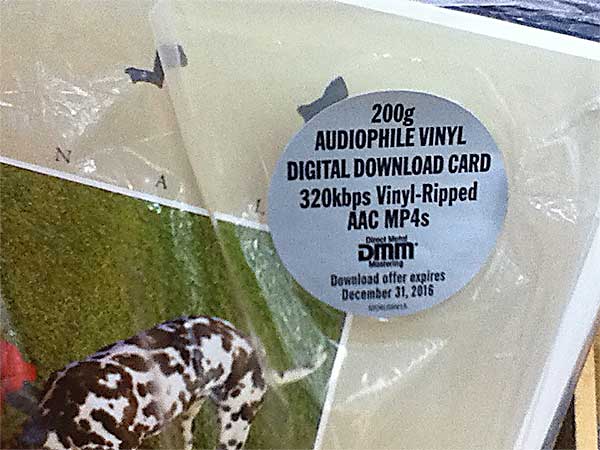 Possibly the most blood-chilling hype sticker I’ve ever seen… the only good news here was that they didn’t use MP3 format, which eliminates all frequencies above 15KHz [1/4th the range of human hearing]

As The Post-Punk Monk, I remain most excited about the rare tracks by my favorite artists which languish on 35-40 year old records; never having made the leap to the CD format. Around 1990, I smelled the way the wind was blowing and got back into buying vinyl again, but not the current vinyl still fairly thick on the ground. That I ignored; preferring to buy current material on CD and the delightful CD single. What I wanted most were the 7″ and 12″ singles that were filled with rare mixes for different national markets and B-sides. I wanted LPs that were so obscure, there was no chance that I’d ever see them on a real CD. I knew CD burning technology was coming and I was ready for it. My first computer was able to digitize sound at the CD sampling rate of 44.1/16. This became my most intense focus of music collecting.

What’s left of the music industry would be ecstatic if all they had to sell me was a shoddy 180 g vinyl pressing cobbled together in a sweatshop on 60 year old presses kept running with spit and bailing wire in the former Soviet Union. They never were too thrilled to sell me a pristine digital master of music I wanted after it became apparent that primates were uploading their precious files to the Web for free dissemination. I didn’t play that game but we all got burned by those who did.

So it’s now very easy to buy albums at $20-30 on bulky, noisy, vinyl, which disintegrates with each play. Almost anywhere. At least if I wanted a clean digital copy of something, I could always buy that [pricey] vinyl LP and it would come with a download code to at least play it on my computer or iPod [an experience which I HATE, by the way]. I’ve already moaned [again and again, actually] about the way that much more profitable new vinyl has crowded out the records I have spent 40 years tracking down as stores are eliminating it in order to increase their profit margins with modern, costly vinyl. I hope that they aren’t just dumping all of those 12″ singles and obscure import albums, but history tells me that this is probably the case.

Last January I was in a 2nd & Charles in Greenville, South Carolina, looking it over. I saw something that would have turned my hair white… had it already not already been halfway there. It was a new 200g (take that 180 g wimps!!!) pressing of Rush’s “Signals” album. The parallels between the marketing of disposable razors [2 blades, 3 blades… no! 5 BLADES!!!) and record albums were were never more explicit. Worse, it actually had a hype sticker on it proclaiming “digital download card 320 kbs VINYL-RIPPED AAC MP4s” like it was doing me a favor!!!!!

So now I would be paying well over $30 for such a release and after all was said and done, the digital file they would deign to give me was recorded from one of the LP copies pressed up and not the glorious digital master tape that was once the lot of the download code redeemer!! Believe it or not, we were once able to buy highly durable polycarbonate discs with 44.1/16 khz files mastered from the actual master tape of an album. This curious practice lasted from as early as 1982 until fairly recently, apparently. Then the hype sticker stuck its brutal shiv deep into my heart.

So in 2018, this costly object was doing me absolutely zero favors. Even this awkward compromise has its days numbered.

21 Responses to Monastic Musings Part Two: Meet The New Boss, Same As The Old Boss, or “They Found A Way To Make Vinyl Even Worse”