The next track was something quite different. “Robot Man” was a deliberately hoary sci-fi cliché of a title that gave the tune maximum ironic value, since the song seemed to be not at all about automatons, but was instead a possibly self-admonishing bit of introspection regarding how McCluskey had emotionally related to others. The initially sparse, harsh instrumentation had intentional hints of The Normal’s “Warm Leatherette” as the seeds of inspiration, but the tune developed to become far more complex than the brutally reductive Daniel Miller classic. 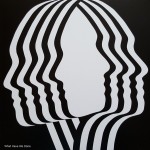 Four songs into this album and the third single had already played by track number four. “What Have We Done” was only the second song form the third phase of OMD that Paul Humphreys had sung; and his first lead vocal on an OMD single since “[Forever] Live + Die” from 31 years earlier. Not that you could tell that from Humphrey’s typically boyish vocal style; still sounding as fresh-faced here as he had on “Souvenir” lo, those many decades earlier. The music bed was one of poised, crystalline beauty, yet with the threat of saccharinity still lurking beneath the surface. It definitely lifted Laurie Anderson’s “O Superman” vocal loop rhythm section whole cloth here. Fortunately, the lyrics hit the listener exceptionally hard for a Humphreys song. Inspired by the act of euthanizing his pet dog, Humphreys had taken the seed of that painful emotional state and crafted a well-considered look at actions, regrets, and the weight that responsibility for one’s actions incurs.

The component parts of this song conspired to a fuller sum than they would have apart from one another. In this way, the facile beauty of the melody gets frissons of delightful dissonance from the weighty lyrical thread; so at odds with the musicbox melody.

The last OMD album had returned to the notion of having brief, abstract interludes among the conventional songs, ala their “Dazzle Ships” creative gambit. “Precision + Decay” was an elegant sound collage referencing the decay of industry via the Ford Motors Dearborn automobile plant. The synthetic voice carried the first part of the song with a simple verse illustrating how entropy always wins. Then to illustrate the notion, sound bites from the early, vibrant days of the Ford plant were knit into the second half of the song. It’s brief but memorable, thanks to an elegant melody running through the song courtesy of Andy McCluskey’s bass. The band name-checked Peter Hook as an inspiration for the bass line, but this was much more delicate, with none of the aggressive swagger that Hook brings to the instrument. The bass line is such that having heard it this morning, it’s been unfurling in my head for the whole day.

The last OMD album had a lot of Andy promising glitch influence on the album, but I was unconvinced. This time, the current OMD album actually has some serious glitch DNA in the form of the slow, methodical “As We Open, So We Close.” The song was built on a glitch rhythm section chassis that barely resolved itself in to a rhythmic pattern, with lurching, buzzing synths injected into the mix while Andy sang a lyric of cyclical emotional turmoil and damage with lead synths atop it all to somehow make it work, melodically. The tone seemed to point back to the post-divorce thrust of the previous album, making me think that this might have been a song left over from those sessions that didn’t quite gel with the last album.

After three somber tracks it was time for an injection of some upbeat OMD energy with the ravishing “Art Eats Art.” Over the sort of driving, gorgeous melody that Kraftwerk lost interest in 40 years ago, Andy’s harmonized, vocoded voices sang the names of prominent artists over a triumphant ascending chord sequence. It was a thrilling track from OMD who have frequently pastiched “Europe Endless,” my favorite Kraftwerk song [and apparently Andy’s as well] but who have finally, with this one, made a song that has the same kind of expansive, beautiful melody common to that song without sounding anything like a knockoff. Really, it was the kind of song that I wish that Kraftwerk had an interest in making; the lyrical thrust would be a new facet for them to investigate as well, but OMD got their first. The band are well known to get much inspiration from viewing art and this one really cuts to the heart of their intellectual passion for art. How I wish that this one had a nice long extended version.

2 Responses to Rock GPA: Orchestral Manoeuvres In The Dark [part 69]