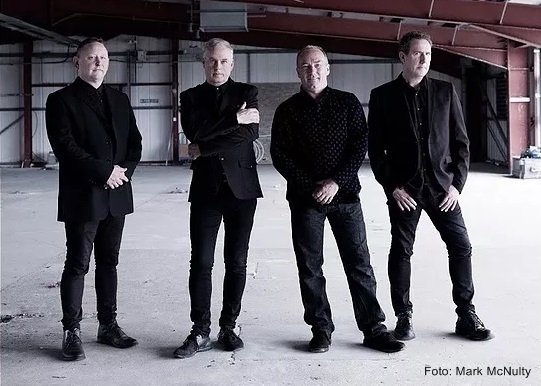 Having performed at the Museum of Liverpool for the first time since losing Malcolm Holmes as a drummer after his heart attack in 2013, the band opted to replace him with the first OMD drummer… the reel-to-reel tape deck named “Winston.” But only on a one time basis. The band played a handful of dates in 2014. In addition to the Museum Of Liverpool shows, they also played a pair of duo sets [just Andy + Paul] in Europe. For the band to viably continue going forward, it made the most sense to engage OMD’s third drummer; the man who occupied the seat during the AndyMcCluskey years – Stuart Kershaw.

As 2016 rolled around, Andy McCluskey was discussing the fact that OMD were hip deep into the making their third album since reforming. It was being given a tentative title of “The Punishment Of Luxury” and once again, Andy was talking about the “glitch influence” that was influencing it. I felt that had had been overplayed somewhat on the scarcely glitchy “English Electric” album, so I was dubious. It had been three years since “English Electric” but I was in no rush. Rushing things is what had a ruinous effect on OMD the first time. If they wanted to do this again it had to be on their own terms.

On May 9th of that year, the band had booked Royal Albert Hall for a special concert, where perhaps egged on my the playing of almost half of “Dazzle Ships” in the Museum of Liverpool benefit concert in 2014, they were now playing the entire album as half of a set at the RAH. To wrap the show up, they were playing “Architecture + Morality” complete again although that one had had quite an airing in 2007. As usual, this was not a show open to fans of modest means outside of the UK. I sure can’t pop off to London at the drop of a hat. In fact, I’ve never done it; so daunting were the budgetary issues surrounding such a trip. Fortunately, the show, like the Museum of Liverpool show, was being recorded, and would get released immediately as one of those “instant CD-Rs” for sale in the venue as well as mail order through a Pledge Music campaign. The fourth OMD live album since their reunion would be released shortly afterward and would be winging its way across The Atlantic to my Record Cell.

2015 had seen the band playing large festivals as a four piece and the duo formation also toured Europe on the Proms festival circuit, with Andy + Paul along with a full orchestra. The latter had been an OMD hallmark since their reformation and the band’s popularity in Germany is such that there must be good demand for these shows. North America would get their chance in the Summer of 2016 as OMD mounted their largest North American tour since reforming; 36 dates opening up for the …Barenaked Ladies summer shed tour. Needless to say, some were flabbergasted at this. The hue and cry among the OMD fans on the forum was split on the issue.

OMD hit the “shed” circuit of America with a huge tour in 2016…opening up for …Barenaked Ladies?

For my part, was I going to pass up an OMD opening set just four hours away? Not really. I had once rode in a car for ten hours to see them the first time. With OMD-loving friends close to the action in nearby Raleigh, we elected to attend We got there a bit late, missing the warmup set from Howard Jones [no loss according to what we caught – ghastly EDM versions of his hits], but in plenty of time to enjoy a breezy OMD selection. I was hoping for at least one song from the current album, “English Electric,” but it was not to be. Of course, all of the band’s US Top 40 hits [5] were duly played, and a reasonable selection of catalog aired to several thousand people. We had seats at the front of the aisle break midway through the venue, so we had no problem dancing.

The naysayers could balk, but the fact was, that OMD were paid well by people who respected them, irrelevant of how much I can’t stand Barenaked Ladies, and got to embark on a long tour of North America and possibly expand their audience. I suspect that it bore a little more fruit than just green on the bottom line.

Next: …About That Fourth Live Album

2 Responses to Rock GPA: Orchestral Manoeuvres In The Dark [part 65]