While we waited for the inevitable CD/DVD of the Museum of Liverpool shows to come, there were other OMD events to keep us busy in 2015. Primary of these was the February DLX RM of  their 1984 “Junk Culture” album.. This was their initial reaction to the poor selling “Dazzle Ships” album, and while it represented the new, teeth-gritted OMD, trying to re-establish their commercial fortunes, the fact was that as the first of such attempts over the next five years, it was actually a rather good album.

The real pull here was for the first time, more than just the attendant B-sides and remixes would be included in the DLX RM. The first four OMD DLX RMs were all single disc affairs, with the exception of “Architecture + Morality,” which came with a DVD. Here, the B-sides/remixes were on a second disc, with five previously unreleased tracks/versions. Monkbait! But as the first copies went to the early adopters, there was much outcry regarding the sourcing errors on the package. The distinctive original LP mix of “Tesla Girls” had been replaced with a cut similar to [but different] from the 7″ mix. The 12″ dub mix of “Julia’s Song” that immediately preceded the re-recorded version on the “Talking Loud + Clear” 12″ single was left off. “Wrappup,” the very different early version of “All Wrapped Up” before it became a soca raveup was inadvertently replaced with “All Wrapped Up” for a second time on disc two. And a different, unique] mix of “Love + Violence” was used on the album on disc one.

UMG, who held the title, reissued it with the “Wrappup” track included on disc two, but the other differences” remained. Making a copy of the original CD/LP mandatory for purists. I held off for a while since I never usually have the money to buy packages like these when they are released. When I heard of the errors,waiting became a better way forward. After a year, I got my copy with at least the “Wrappup” error repaired. Then, as a perhaps as a planned sop to the voices moaning about the missing dub mix of “Julia’s Song,” the band issued an April RSD 2015 10″ single [UK/Euro RSD only, natch] of “Julia’s Song [dub mix]” b/w “10 to 1,” the “new” song from the DLX RM. Since these RSD releases were not available in America, the prices for them, with postage from abroad were prohibitive. Since I have many [but not all] of OMD’s 10″ singles, I would like to own this one day [as well as the “Dreaming” and “The Future Will Be Silent” RSD 2014 release] , but it’s not in the cards for me yet. 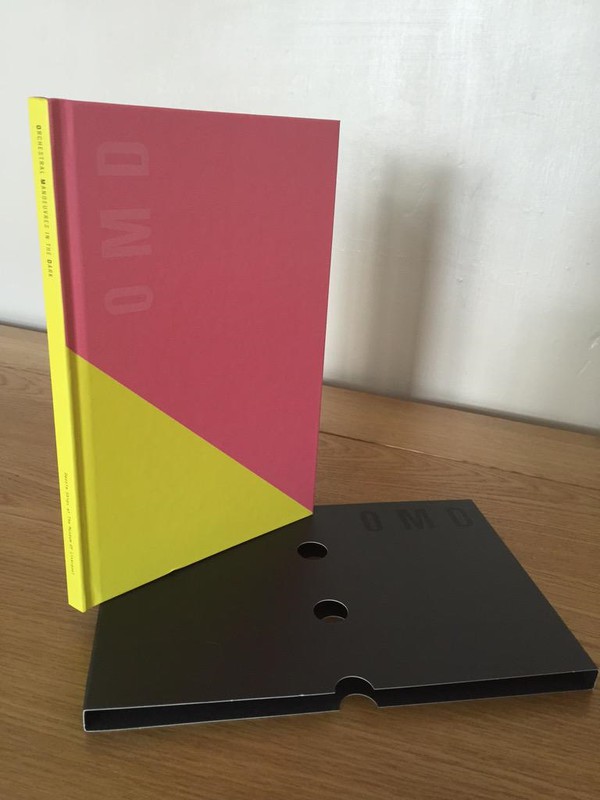 Another hardcover OMD live album of a very special gig

September of 2015 brought with it the mooted live recording of the Museum Of Liverpool concert from 2014. The package was sold as a CD/DVD/book on Pledge Music; OMD’s first, but not last, partnering with the crowdsource and releasing platform. The package was rather deluxe and of course the DVD was mandatory for any like myself who could not be expected to pop over to Liverpool for the gig. Since the first night had sold out rapidly, they added another show and filmed it the second night for release.

The format of this was similar to that of the limited “Live In Berlin” with a hardcover booklet with both discs this time in a die-cut slipcase that referenced the die-cuts in the UK LP of “Dazzle Ships.” Of course, this being the 21st century, there were snafus. Apparently, the DVD had been mastered with a mono soundtrack, so buyers were sent a replacement DVD [PAL, by the way] when the replacement disc was manufactures a month later. I ordered a copy a few years ago and good thing too. It’s now going for prohibitive money in the aftermarket. I’ve [sadly, but typically] not yet viewed the live DVD, but the CD is a known quantity, and we’ll pick up there when we dive back into this slow, stately OMD Rock G.P.A. after a little break next week.

2 Responses to Rock GPA: Orchestral Manoeuvres In The Dark [part 63]