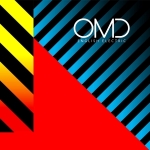 OMD had said that they were taking as much time as they needed to follow up “History Of Modern,” their return to recording from 2010. All of 2012 came and went with only postings to the OMD forum by Andy McCluskey on the progress of “English Electric” to show for it. After a dip into the “Dazzle Ships” playbook of brief, abstract sound collage for the first of four such interludes here, that means that there were only eight new “songs” here, and also like “Dazzle Ships,” one of them [“Kissing The Machine”] had been re-worked from an earlier, 1993 collaboration on the first Karl Bartos Elektric Music album. The similarities did not end with these stylistic congruencies.

It opened with the bracing palate- burner “Please Remain Seated,” and the evocation of the “Dazzle Ships” aesthetic was rather appropriate. It’s not a piece of music, per se. It’s an artistic collage of sound featuring electronic jingles, synthetic voices [straight from “Dazzle Ships,” albeit using modern text to voice synthesis instead of a Speak N’ Spell®] and glitch aesthetics. While “Dazzle Ships” was an album that addressed external politics, the big difference with this album was that “English Electric” was largely about internal politics. Significantly, Andy McCluskey had divorced from his wife during the period between “History Of Modern” and “English Electric.” When I listen to this album, it is almost entirely colored by my reading of his personal catastrophe. “Please Remain Seated” opens with synthetic voices telling the listener that “the future your have anticipated has been cancelled… please remain seated and wait for further instructions.” That remains one of the most oblique divorce references I’ve heard but this album is packed with them.

The pre-release single, “Metroland,” was perhaps the lightest moment of the album. A long Kraftwerkain pastiche of “Europe Endless,” it maintained a superficial jauntiness that seemed to spiral upward and outward, but scratch the surface and the negativity and bitterness lay there in waiting.

“We fail, and we fall
We fear, and we crawl
With fate in our hands
We burn in Metroland” – “Metroland” 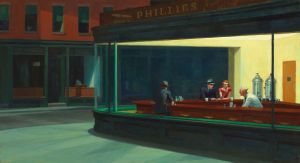 “Night Cafe” was the third single. The song used Edward Hopper’s seminal painting “Nighthawks” [Left] as a touchstone and not for the first time in OMD’s history, either. Many will recognize that the cover of the OMD album “Crush,” sought to depict the scene from a different angle, incorporating Andy and Paul into the urban landscape. Hopper’s painting spoke to the urban desperation and isolation that haunted many, as well as the general angst of the WWII era itself,  and McCluskey was fairly wallowing in his anguish here… while dropping names of Hopper paintings throughout the song. As usual the music was superficially happy, and for once, the soft synths were entirely appropriate to the proceedings. McCluskey now just had machines to keep himself company as he sang of the painful terminus of a relationship. Possibly one fraught with surveillance as verse two indicated.

“Sitting in an Empty Room, at the
Bitter ending on a day of doom, and I’m
Dreaming like I used to do, of the
Way it was when I met you, and the
Memories they come and go, like a
Shadow on the stair below, I’m a
Voyeur in a high window, but
Unobserved I watch you go, Oh No” – “Night Cafe”

The brief interlude of “The Future Will Be Silent” was ostensibly built on McCluskey observing that noise diminishes as mechanical processes get refined over time to be more efficient and silent. An OMD science geek song. Yes, but could that also be a smokescreen for the fact that when one is alone, there is certainly a corresponding drop in the sounds of one’s daily life. A solitary person might not ever hear another human voice.

Next: …A Missed Opportunity

3 Responses to Rock GPA: Orchestral Manoeuvres In The Dark [part 60]