The next OMD single appeared just a year after “Dazzle Ships” hit the bins to confusion and a massive drop in sales. OMD were now reacting to that failure, so their music would undergo a sea change; losing it’s willful obscurity and crepuscular shading to become far more pop oriented.

“Locomotion” was OMD having an upbeat soca party [?] in the Caribbean, and the 12″ single had two great non-LP B-Sides to atone for that decision. “Her Body In My Soul” was the best face of the “new OMD sound.” This number was bright, upbeat and danceable, but if we examined it closely, the lyrical content was based on the aftermath of a failed love affair. Little did we know how many of this variety of song OMD would dish out in the ensuing years now that they were getting all emotional with their subject matter in an effort to court appeal. It was here that Andy first mentioned “a black rose in my pocket,” which he maintains is his favored metaphor for a now dead love. [see also: “Stay (The Black Rose And The Universal Wheel)”] The actual production is more squarely dancefloor aimed than previously from this band. It seemed like they were shooting for a vaguely New Order imperial period type of sound, though their artistic DNA definitely colored the proceedings. A sped up harp run sample as evidenced here, is nothing that would make it to a New Order 12″ of the time, but it was keeping with OMD’s penchant for looking backward to history, even when making a sample-based dance track.

Both B-sides on the 12″ of “Locomotion” were included here. This spoke well for the vitality they still had to unleash on their B-sides. “The Avenue” is their final classic B-side from their middle period. The slow, mournful chord sequence that drove this was one of my all time favorites. I love every song that used it. The samples of what sounded like the field recordings made at Stanlow refinery for “Stanlow” were put to one last use here, as the band were aiming for the melancholic “Organisation” vibe that they had not touched for a while… and would scarcely ever touch again. The doom-laden whistling [that can’t be too easy] that McCluskey ended the song with perfectly fit its funereal air. I also loved the squelchy, dubbed out construction sounds that might have been left over from the title cut of “Architecture + Morality.” They would scarcely make anything this good going forward.

Their next single, “Tesla Girls” was another bright and upbeat dance number, but it had the essential OMD geekiness of  the subject matter to coast on considerably. It’s B-Side was the song “Garden City.” Like the A-side, it’s a sample-based pop song with more atmosphere than now common for this band. I especially loved the twangy, Duane Eddy-influenced synth lead. The rhythmic complexity was a treat and we all gasped as McCluskey dropped his first F-bomb here. His split octave vocals were even more exaggerated and pronounced as he was moving at least three octaves here with an exaggerated basso profundo [trying to, any way] that was teamed with a high tenor on the chorus for almost comedic effect. The sampled violin coda over the beatbox breakdown was a cleaner and brighter OMD than the norm, but this new approach quickly superseded the old OMD ways to become the status quo. At least here, I couldn’t argue too hard with the end results. 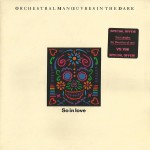 OMD’s other two singles from “Junk Culture” retained new versions of familiar songs [All Wrapped Up,” “Julia’s Song”], so they did not figure in this collection, probably for space reasons. instead, we jumped ahead from the third “Junk Culture” single to the first “Crush” single. “So In Love” had two non-LP B-sides: “Concrete Hands” and “Maria Gallante.” Neither was world class OMD, but the former perhaps had an edge, and it appeared on this collection. It’s another sample-goosed dance number with a constantly shifting arrangement that’s probably it’s best foot forward. It’s decidedly in the more danceable spirit of the “Junk Culture” tracks, and I would not be surprised if it was written [and maybe even recorded] around that time instead of the 1985 milieu of “Crush.” 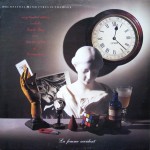 “La Femme Accident” was released on a 2×12″ single and I was excited to see this, but when I rushed out and bought a copy, the extra 12″ was just a live version of “Locomotion [live]” b/w “Enola Gay.” I fell for a hype! Fortunately, the non-LP B-Side was no slouch! “Firegun” was yes, another sample-based dance number [are you sensing a pattern here?] but it was a dark example of such. The sense of dynamics employed here suggested “Apollo” from “Junk Culture,” albeit with more interesting lyrics. Plopped down in the relative boredom of the “Crush” album period, this one was a real highlight. Coupled with the delightful A-side, this was the single to buy for two of the best songs of the campaign period in a tasty package.

Next: …The Hasty Wrap Up

6 Responses to Rock GPA: Orchestral Manoeuvres In The Dark [part 48]